Frank O’Hara smokes cigarettes and avoids me. Frank O’Hara has adapted his party-mingling so that he’s always on the balcony of Grace Hartigan’s apartment when I’m in the front hallway, always in the living room when I’m in the kitchen, pinned there by James Schuyler, that bitch, rattling my cage. “It’s just embarrassing,” says James, gesturing my dignity away with a highball. “He doesn’t want to talk to you.” (Ben Rawluk, “Frank O’Hara is Never Home”) 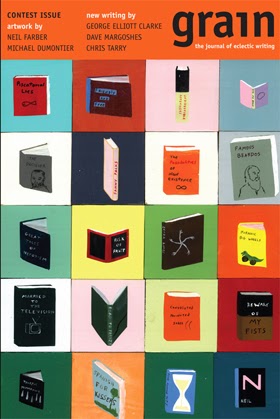 The first thing that struck my eye in the new issue of Grain magazine—41.2, “matchbook”—was the poem “Frank O’Hara is Never Home” by Vancouver writer Ben Rawluk. I can’t imagine anyone reading that first stanza, quoted above, and not immediately being charmed. While I do like that every issue is given a name, I’m unclear, exactly, how this one fits. What do they mean, exactly, by “matchbook?” As editor Rilla Friesen writes in her “Editor’s Note,” “Think of this issue of Grain as an incendiary device. What kind of story could spark a change in your life, in the way you think about the world?” It all seems rather arbitrary, honestly, no matter how much I enjoy the work inside. Although I do enjoy the idea of each issue being titled, I do suppose it would be impossible to connect with every one. This issue includes the contest winners to their annual “Short Grain,” with poetry judge Méira Cook picking pieces by Richard Kelly Kemick, Megan Clark and Caroline Wong as her first, second and third place winners, and fiction judge Stan Rogal picking stories by Dylan Levi King, Scott Bartlett and Seyward Goodhand as his first, second and third place winners. As Cook includes in her “From the Poetry Judge” note:

What is the opposite of poetry? It is boredom, it is words following one another in single file, through one-track meanings, through denotation and dumbfounding. Poetry is an indifferent conductor of electricity, I think, which is one of its great strengths. You want those words to short and blow out, you want those synapses to crackle.
In her introduction to Short Talks, Anne Carson writes about the avoidance of boredom, which if you are a poet is a lifetime’s ardent task. Here is her eloquent, jagged plea: “You can never know enough, never work enough, never use the infinitives and participles oddly enough, never impede the movement harshly enough, never leave the mind quickly enough” (Brick Books, 1992).

There is something fascinating about the poem by Richard Kelly Kemick that won, his “A Note Left on the Dresser,” for its expansive prose-line, somewhere swirling around similar structural territories to Carson and even Cook herself, that includes:

What the Book of Amos calls the Seven Sheep and Edmund calls
Ursa Major, the Inuit call the Caribou. This is because caribou are
one of a paw-full of animals passed over by the blue-atmosphere of the Bible
and Shakespeare. I don’t respect the fact that they didn’t know
the animal existed when all they had to do was look up.

Before you fell asleep, you asked me to define our relationship.
These are the analogies I’ve come up with. I’m in the kitchen, making tea.

The issue also includes six new poems by Toronto writer George Elliott Clarke from “The Canticles,” providing also a short note on the work-in-progress (some of which also appeared in the tenth issue of ottawater, as well as a recent chapbook through above/ground press). As he writes, “Do my ‘Canticles’ follow Pound’s Cantos? Yes, but in retaliatory pursuit.” He writes:

Every writer who claims an “African/Negro” identity must consider slavery sooner or later, for it is the vehicle that transformed our ancestors from being independent peoples to being suppressed beings, mere chattel and seldom citizens (except for when courts mandated their execution). Worse—or better yet—the wealth that still floats the NATO nations derives from the four centuries of branding “Blacks” and disbanding “Indians.” Behind the amassing of that lucre there lurks, however, a history of rape and massacre and pillaging: The Terror that Europe unleashed on Africa and the Americas. This chronicle provides the grounds for my epic-in-progress, which follows Pound’s dictum that the epic traces history.
I began “The Canticles” In Zanzibar in February 2008. Its tripartite structure is vaguely Dantean. I: “The Book of Origins” is my Inferno, featuring discourses on racism and slavery—pro-and-con, espoused by characters both historical and invented. II: “The Book of Beauty” is a kind of Limbo, offering revisions of religious texts according to “Black folk” theology. III: “History of the Coloured Baptists of Nova Scotia”—my Paradiso—narrates the rise of the African Baptist Church of Nova Scotia (proclaimed into existence in 1853).
Three pseudo-Oulipo constraints also govern this writing: No poem can be written in m current home city of Toronto. (These poems are travel writing, in a sense, then.) Moreover, in most of the poems, I cannot know what I am going to write until I have already begun to write. Surprise—organic—is the method. Thus, the “Caprichos” poems got started automatically at a bullfight in Madrid, Spain, in October 2012. (A visit to the Prado convinced me that the speaker could only be Goya.) Similarly, the Tangiers poem got written in Morocco. However, “The New York Times Uncovers Arson” got inked in a surprisingly nice (airport shuttle-connected) hotel outside Venezia, in September 2012: Thus, I was astonished by the carnage that my reporter witnessed. Thirdly, “The Canticles” must be written in real ink by fountain pen: No substitutions permitted.

And then, of course, there is the intriguing and utterly charming statement by “Featured Artists” in the issue, Michael Dumontier and Neil Farber, that reads:

These paintings are the result of our regular practice of meeting on Wednesday evenings and making paintings while looking at books and listening to music. The paintings are meant to be complete thoughts when finished.
There is no imagery for its own sake. It adds up to something.
A frog crawls out of a woman’s nose. Why is it there? It’s perfectly natural. It’s a frog’s nose. A lion cries his eyes out. Why is he so sad? Because we all know that lions have thorns in their paws. A woman marries an evergreen tree. We all know it won’t last. Even she knows it won’t last, but it’s what is in her heart at that moment and she needs to play it through. A grandfather becomes a literal dinosaur with spines growing out of his back to cool his blood. A single red shoe hangs from a branch, because you should always be aware of what might happen in the woods.
You only get a bit of the conversation, but you know where it’s going. Home is where the heart is.