address to the city

i call you out

There have been numerous responses in poetry to the past decade of missing and murdered women in Vancouver, but little as powerful as the poem “address to the city” that opens Vancouver poet and activist Mercedes Eng’s first trade poetry collection, Mercenary English (Vancouver BC: CUE, 2013). The piece is an angry, righteous and incensed variation on the poem/chant bpNichol composed out of his own sense of municipal disappointment, “You are city hall my people,” but with a push and a purpose ten-by-tenfold: “i call you out[.]” Providing an opening salvo to the collection as a whole, Eng quickly establishes the tone of Mercenary English as a book of rage, frustration, grief and a call to action, as well as a critique of government inaction, social imbalances and those that have allowed and even encouraged the silence of the disappeared. As the poem/section “knuckle sandwich” opens:

let the women carry this miscarriage of justice on their backs

let them give birth to this miscarriage of justice

Or the second section, that includes:

violence: the exercise of physical force so as to inflict injury on, or cause damage to, persons or property; actions or conduct characterized by this; treatment or usage tending to cause bodily injury or forcibly interfering with personal freedom

words are confusing
Is “property damage” violence?
Are “persons” and “property” the same thing?
What’s the one for the big men dressed in boots and helmets, holding shields, holding assault rifles 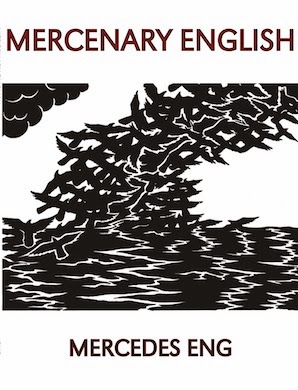 Through the three sections that make up Mercenary English—“knuckle sandwich,” “February 2010” and “autocartography”—she composes a wide and complex canvas, stretching the poem sequence/fragment to discuss and critique a number of issues focused in and around Vancouver, including the “tentcity” of the Woodward’s Squat, B.C.’s “Highway of Tears” and Ontario’s “Highway of Heroes,” and the decades of murdered and missing women around Vancouver’s Downtown Eastside, as well as the Robert Pickton trial. And Eng certainly isn’t the first poet to deal with such material—Sachiko Murakami wrote about the representations of missing and murdered women in her home city, and the city's most infamous neighbourhood, the Downtown East Side in her first poetry collection, The Invisibility Exhibit (Vancouver BC: Talonbooks, 2008), as did Vancouver poet Shannon Stewart in her Penny Dreadful (Montreal QC: Vehicule Press, 2008), not to mention the issue of West Coast Line that Vancouver writer and editor Anne Stone also edited on the complex issues around representation and the tragedy of the missing and murdered women (another issue focused on Vancouver’s infamous “Woodsquat”)—but Eng’s is one of the most vibrant, lively and powerful works I’ve seen so far, able to utilize both a sense of language play and an unapologetic empathy and rage at such an emotionally complex and difficult subject matter.

i breathe
i shout
and
i get mad

someone told me
my anger is a gift
and
I’m gonna knock your teeth out with this gift. (“autocartography”)

Ina piece he wrote on Eng’s work in Lemonhound (posted April 19, 2011), Vancouver writer and critic Clint Burnham references Eng’s two self-published chapbooks, including February 2010, a publication he says was produced during the Winter Olympics. It suggests that the three sections of the collection might have been originally composed as self-contained units (her Vancouver125 bio lists her as the author of the chapbooks February 2010 and knuckle sandwich), but as part of a larger conversation, one tied together, in part, by the opening poem. Burnham writes that Eng is “… one of the brightest young writers on the Vancouver scene, whose work combines tart insights into gender and racial relations, a playfulness of language not always found in political poetry, and a fine ear.” He continues:

What works so well here is the reader’s uncertainty about when Eng is sampling an ad and when it’s her voice. That’s the point – the lack of difference between what is surely an advertisement for a police academy (perhaps the Justice Institute in New Westminster, B.C.) and what is Eng’s own commentary. Perhaps “It’s calling someone”, probably the slashes (used throughout the chapbook); but then the actual quoted statement, framed in quotation marks, makes us wonder if the first verse-paragraph is a quotation. Perhaps Eng just made it up, make a fake sample like Dr Dre used to with those wicked flutes on The Chronic.

Mercy’s second chapbook is untitled; it has an image of brass knuckles screenprinted on the cover. It is concerned with, on the one hand, B.C.’s “Highway of Tears” (a northern highway along which dozens of women, mostly aboriginal, have been found murdered), and Ontario’s “Highway of Heroes” (a stretch of highway along which the bodies of Canadian soldiers who died in Afghanistan are driven). So we have the institutionalization of B.C.’s missing/murdered women (in Vancouver’s Downtown Eastside as well as the north) and the commemoration of war heroes. Again, Eng works through appropriation, in a brilliant sampling of war reporting that is pitch-perfect:

Paul Strand: We’re, I would say, dozens of miles from Baghdad. I just talked to our commander, and he asked that I not be too specific about direction or distance; I think you can understand that. So far, everywhere we’ve gone we have seen artillery ahead of us and then artillery behind, and we’re getting reports that there’s fighting in all of the cities we’ve been through. So, I guess if this were the Old West, I’d say there were Injuns ahead of us, Injuns behind us, and Injuns on both sides too.

Through her use of sampling and the fragment, Eng knows that words themselves have power, and hers is a voice that needs to be encouraged by those who need to hear it, and feared by those who wish to suppress it.