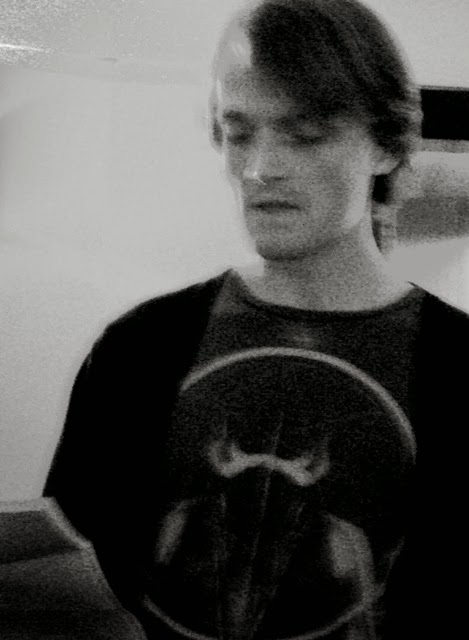 Colin Fulton lives in Montreal, or possibly the Okanagan Valley, maybe. Life Experience Coolant is his first book of poetry and it was recently published by Bookthug. Sometimes he doesn't lose.

1 - How did your first book change your life? How does your most recent work compare to your previous? How does it feel different?
Well, keeping in mind that my first book was only released about a month prior to writing this, my life hasn’t changed much because of it. I did move across the country and am back in school, but that wasn’t directly related to LEC’s publication. The stuff I’ve been working on lately looks very different but shares an underlying logic since a lot of it was starting to develop during the editing of LEC as a manuscript.

3 - How long does it take to start any particular writing project? Does your writing initially come quickly, or is it a slow process? Do first drafts appear looking close to their final shape, or does your work come out of copious notes?
The pattern I’ve noticed is a very slow build-up of materials, notes, ideas, files, images, and then a burst of composition and assembling. That was the case for LEC and it seems to be the case for what I’m currently working on.

4 - Where does a poem usually begin for you? Are you an author of short pieces that end up combining into a larger project, or are you working on a "book" from the very beginning?
I like books because they in a sense transmit poetry (which is itself transmission) better than poems.

5 - Are public readings part of or counter to your creative process? Are you the sort of writer who enjoys doing readings?
I dislike readings because not everything that is poetry can be read aloud to people sipping things.

6 - Do you have any theoretical concerns behind your writing? What kinds of questions are you trying to answer with your work? What do you even think the current questions are?
I do have theoretical concerns. They include, but are not limited to, questions of modality and mereology, obscenity, the (im)possibility of iconoclastic gestures, ideology critique and its critique, stuffed animals who are more you than you, behaviourism, the difference between largeness and largesse, post-object-oriented-philosophy (or P.O.O.P for short), the question of why my fucking tub won’t fucking drain after a hundred fucking attempts to unclog it.

8 - Do you find the process of working with an outside editor difficult or essential (or both)?
I’ll tell you later.

9 - What is the best piece of advice you've heard (not necessarily given to you directly)?
“Don’t answer question nine with a joke, Colin.”

10 - How easy has it been for you to move between genres (poetry to critical prose)? What do you see as the appeal?
Because capitalist society arbitrarily places value on highly specialized activity I’ve found that culturally capitalist society, such as that of poetry, responds by placing just-as-arbitrary a value on the inverse, interdisciplinary and multimedia work. Which makes sense since the arts are supposed to fill up the various gaps that specialization leaves untouched. Inefficient efficiency absolved by efficient inefficiency.

11 - What kind of writing routine do you tend to keep, or do you even have one? How does a typical day (for you) begin?
I’ll tell you later.

12 - When your writing gets stalled, where do you turn or return for (for lack of a better word) inspiration?
Highly repetitive activities like sitting on a bus, drafting on MTGO, cooking, or when I’m working, work.

13 - What was your favourite Halloween costume?
Ok, I know this might sound made up but it was actually just confirmed for me by my Mom: I once won a contest for best costume when I was like seven…dressed as a packet of Lifesavers. I think it’s very telling that I dressed up as a candy in an attempt to extort candy out of my neighbours.

14 - David W. McFadden once said that books come from books, but are there any other forms that influence your work, whether nature, music, science or visual art?
Books don’t come from stuff.

15 - What other writers or writings are important for your work, or simply your life outside of your work?
K.A. Appelgate’s “Animorphs” series was my first encounter with the discourse of biopower and I still return to it when I want to put questions of identity politics into perspective. Also “Talks at the Yenan Forum on Literature and Art,” which collects Mao Tse-tung’s 1942 addresses to the Revolutionary Army on the still-pertinent subject of art’s relationship to class struggle.

16 - What would you like to do that you haven't yet done?
I’ve never actually managed to live in the same place for a year straight, so that might be nice. I mean, I always end up spending a summer or winter or weekend elsewhere.

17 - If you could pick any other occupation to attempt, what would it be? Or, alternately, what do you think you would have ended up doing had you not been a writer?
It’s too soon to tell.

20 - What are you currently working on?
You’ll see.