Kirsten Kaschock, Windowboxing: A Dance with Saints in Three Acts


I want a new wife but with all of my old things.

I am tired of the domestic packaging of women, the imprisoned-cellophane versions. Meatdress.

I will fail to say this correctly. (“[WINDOWER]”) 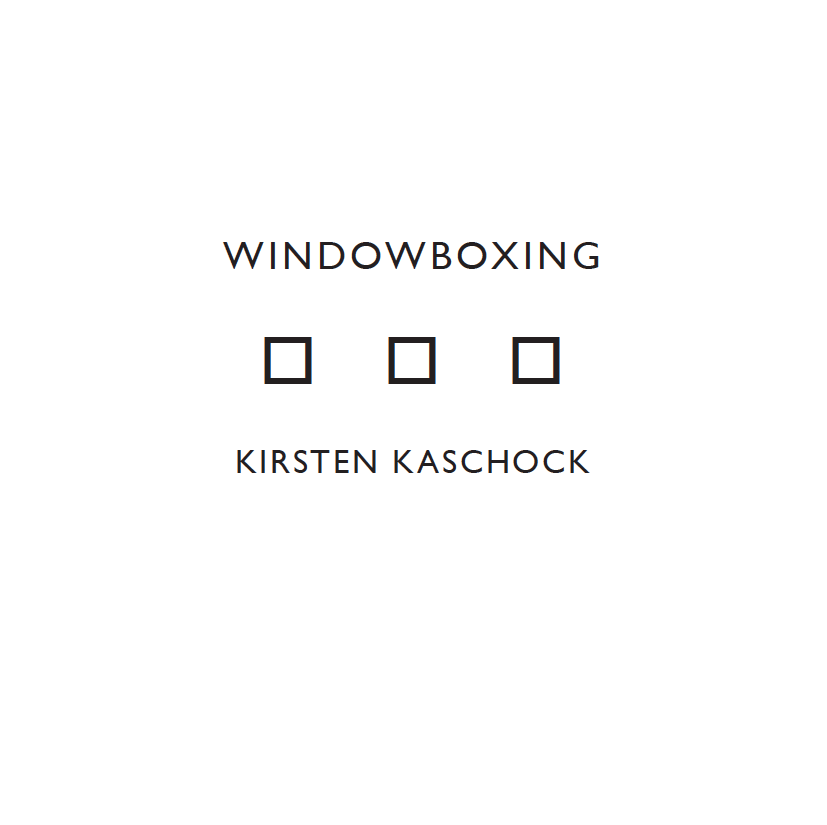 I am fascinated by the sentences in Kirsten Kaschock’s Windowboxing: A Dance with Saints in Three Acts (New Jersey: Bloof Books, 2013), a collection of short poems, each of which are constructed through a series of accumulations. Her sentences are sharp, and cut deep into bone, such as “History flattens. She can see out.” from the poem “[WINDOWER],” a piece on seeing through and seeing out, and striking at the differences between the two. The collection works through ideas of perception, of seeing, and of conflict through movements on gender, gender relation and gender perception. There is a violence throughout the collection, and a tension, as she writes to open the poem “[WINDOWNER]”: “You would have my explosions be localized and armed against themselves. // You would prefer I not discuss ‘men’ or ‘women.’ The genres. // It would be better to prevent the spread of the insurgency.” The collection wraps itself around the image of the window, framing a way of both seeing directly and through. The poem “[WINDOWRIGHT]” opens: “Window, like woman, an invention. // Think caves. Invent: to welcome wind. To shun: unwelcome.” Her title suggests a performance and a stage watching, instead of a series of characters or performers, a sequence of short poem-scenes, each as thick and descriptive as an essay. Kaschock’s poems explore the violence and confusions so often included between the genders, and the way gender is perceived, as one fixed idea clashes up against another opposing fixed idea.

I can’t do my heart today, fuss till it’s lazy, coral, a century or more of microscopic animals.

The men I am are plural and all thumbnails, larger and quicker than that, but clumsy. Overlaid, they palimpsest into substance.

The men I am are wilders—btw, wrong prosecution, a satisfying lying.

In the pack, they slap the bitch down. it is like a whisper. She stays down.

The men I am are violent or they are not.

I have never bothered to go fathom-by-fathom underneath I am more afraid of what I might one day do. Fail to do or say accurately. A bad renovation, the bones unhidden, reef a graveyard, the body drunk up, loved at arms’ length (fathom of rope, leash, a good stretch to hang by).

The car, assassination, dishwasher, low-cut: all my fault. Ahem.

As one moves through the collection, the poems begin to open up into a narrative arc, progressing intention, anger and a matter-of-fact ending that can’t be avoided. Kaschock is very much a poem of sentences, built incredibly strong, and enough to cut through any material, or allow any coin to bounce off. Composed with the slight distance of journal entries or letters home, Kaschock’s Windowboxing: A Dance with Saints in Three Acts reference dance movements, death by fire and suicide, unafraid of dark territory and yet removed from it as well. It’s as though the only way to discuss any of this is absolutely straight.

If your father or sister molests you, there is a support group.

If you aided them, there is a support group, and serotonin-reuptake-inhibitors to help you with that.

Coffee seems also to be protective against suicide, Alzheimer’s, sleep.

For the kind of sleep that keeps family blurry, coffee combined with alcohol is a folk remedy, for four hundred years, prior to which coffee was more localized.

Alcohol is old as family.

Under the sound of the family, you hear brushstrokes, a percussionist waiting, a painter crying into the palette, thinning the hue, a dancer scuffling, nothing moved.

No thing or one moved.