What does a white dress not resemble? Shattered glass. A burning house.

I had always imagined the day would look like: velvet backdrop onto which the landscape is projected like a sad film. Somewhere in that picture, a declaration.

But long before we’ll enter the house. You’ll notice a man with dark hair looking out the window. Tell me what you see in him.

A locked room, but what else—? 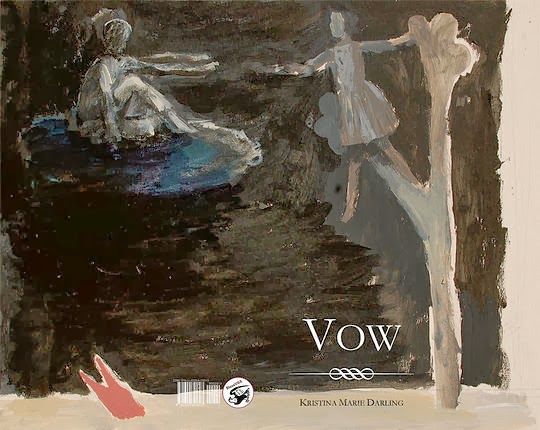 From Buffalo, New York poet Kristina Marie Darling (publisher of Noctuary Press) comes the new trade poetry collection, Vow (BlazeVOX, 2014). Composed as a single, extended sequence, Darling composes her poem using fragment and footnote, constructing her poem as part essay, part gothic romance and part abstract, painting a portrait of a scene in five parts—“Vow,” “Appendix A: Marginalia,” “Endnotes to a History of Brides,” “Appendix B: The Letters” and “Appendix C: Misc. Fragments.” Darling’s Vow is reminiscent of Laura Mullen’s Enduring Freedom (Los Angeles CA: Seismicity Editions, 2012) [see my review of such here], a collection of prose poems exploring ideas of the bride and the wedding. Less an exploration of ideas surrounding such, Darling deconstructs a single narrative of a domestic space, one akin to a prison sentence, writing “Once the bride enters, there’s no way out.” Given the position of Victorian women, the sentence she describes was an impossible one: it was either marry or remain abandoned, and some situations allowed for no good choices. Darling writes: “A small fortress. I can no longer remember/ the weight of a bouquet in my hand.” A lovely lyric constructed around a rather pessimistic scene (and indeed, a promise), the short, dense collection Vow intrigues, in part for the density of the work; stitched and stretched and torn apart. The scene she describes, nearly a boiled-down core of a number of Victorian-era novels, is explored, but not as critically in-depth as it could have; with description and dessication but little commentary, context or explanation, leaving the lyric to hold more of the poem together than it should. Still, Darling’s bio at the end of the collection writes that she is the author of a dozen trade poetry collections. I am curious to see more.

What does a white dress actually resemble? Fallen branches. A dead hummingbird. You watch as it hesitates on the cusp of otherworldly.

Before, I had sewn the dress together as: pure threshold, a bridge between myself and the rest of him.

Tonight I’ll dream of housefires, everything I burned for warmth. Smoke rising from a silk hemline. Tell me if this changes anything—?

I wanted to wear the dress, but neither of us knew how—
Posted by rob mclennan at 8:31 AM
Labels: BlazeVOX, Kristina Marie Darling