Marianne Morris, The On All Said Things Moratorium

you (walking up the road)
you, you (bird with a hole in its wing)
you you you (thought under pressure)
you you (didn’t see what I was) you you you
(now see what I was) you you (a space
opening up between me and myself)
you you (a breath I took through being alone)
you you you (thought reduced to doubling) you
(blatant reformation of) you you you (and me,
me, reformulating) you (a praxis) you (not
singing exactly) you you (can be forgiven for
everything) you (absolutely everything) you
(draw the lines according to what) you
(forgive, arrive late to the games) you
(a staging of battles) you you (just wanting more)
you you (of a nonspecific bounty) you you
(more and then less of me) you (music rising)
you you (up the stairs my thoughts climb)
you you (impose a structure onto the impossible)
you you (eternal suspension)

The back cover of Canadian/British poet Marianne Morris’ first trade poetry collection, The On All Said Things Moratorium (London UK: Enitharmon Press, 2013), includes a small paragraph by the author in lieu of blurbs:

As the documentation of culture, as the source material of history, and as a medium of resistance, we know that words have the power to shape us. The way that we speak to people shapes the way that they treat us, the way that we speak about ourselves creates certain permissions and impossibilities in our own lives. Therefore the specific, intentioned, and pointed use of language may also constitute an attempt to change certain ideas – political or otherwise – that depend on language for their perpetuation. 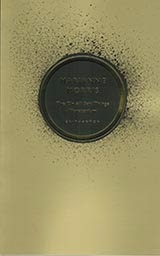 The back cover also informs us that Toronto-born but London, England-raised Morris “has been writing, performing and publishing poetry for over ten years.” What is fascinating about her work is in how the poems feel as though they’re being performed, even while on the page, managing a kind of breathless rush, an accumulation wave of energy, fire and language, enough to knock the reader sideways. As she writes in the poem “UNTITLED”: “You say you are trying to make the everyday / vibrant with being not / cleaving to pulsion and in so / doing seek in every / permission a man.” There is a fantastic and clear wisdom to these poems, and this is not just language poetry, but a language poetry married to performance, without either overpowering the other. The combination is staggering, and creates an entirely new flavour; one that owes as much to contemporary British poetry as anything (and yet, I don’t really know contemporary British poetry well enough to be able to cite specific examples, apart from Tom Raworth, of just what influences might be feeding her work). Where some poems have a more performance feel, others feel like extended train-of-thought essays, managing to be contained and in every direction all at once, with lines so tight one could bounce a coin off any of them. There is such a sharpness here, such a sense of joyful energy in this collection, such a joyful expression in poems that react, respond and rant, exploring a blend of language play, popular culture, historical references, social responsibility, and shades of the metaphysical, as well as what might simply be directly in front of her at the time. As she opens the poem “MEAT BEACH”: “Today is average but totally unique / I decide I am not going to blame myself / even though travel is clearly becoming a / series of attempts at psychological avoidance / & go instead artificially / winged.” Another of a series of uncountable highlights comes at the end of the poem “MAGDALENE” that reads: “By the way, I have / a set of postcards. Most depicting naked women, but some are technical / appropriations of a very famous building. I find a woman’s body / very like a famous building.”

THE MUTILATION OF IRONY

A pinprick. Langauges
sing in their dictionaries, the covers shut, considering the
soft fervor moments take on once they have passed
and it is safe to rewrite them. One says, on reflection,
that was such and such a moment, and perhaps another
will agree. But at the time no such thing existed
and in this way we are all authors. Generalities
and the uniqueness of certain things.
It’s silence that gives birth to them and
then swallows them up, the entire mystery
congealing in someone’s mind a vast
internal dialogue of birth and silence and death
can span any number of weeks, its longevity
coming to mean nothing if death is a certainty and it is.
As you are born, so you shall go: under pressure,
wrought in the privacy of how thought wanders
inventing the connecting wires, what shall we
talk about next. Viciously sweet moments ensue
passing between real eyes. Thought wanders again,
leaves the present company to reminisce about the
not-too-determined future and presses into its hands
the petals of a dying rose. Scentless pieces. The
thought returning each time to a
site of sadness that glimmers with the
compromise of return. Then all the other people
compromises become
laughable by turns having been silently exhausted having
never been tried. Measure out the cups of flour
press them to her neck turning her face away,
the shoes stuck on.