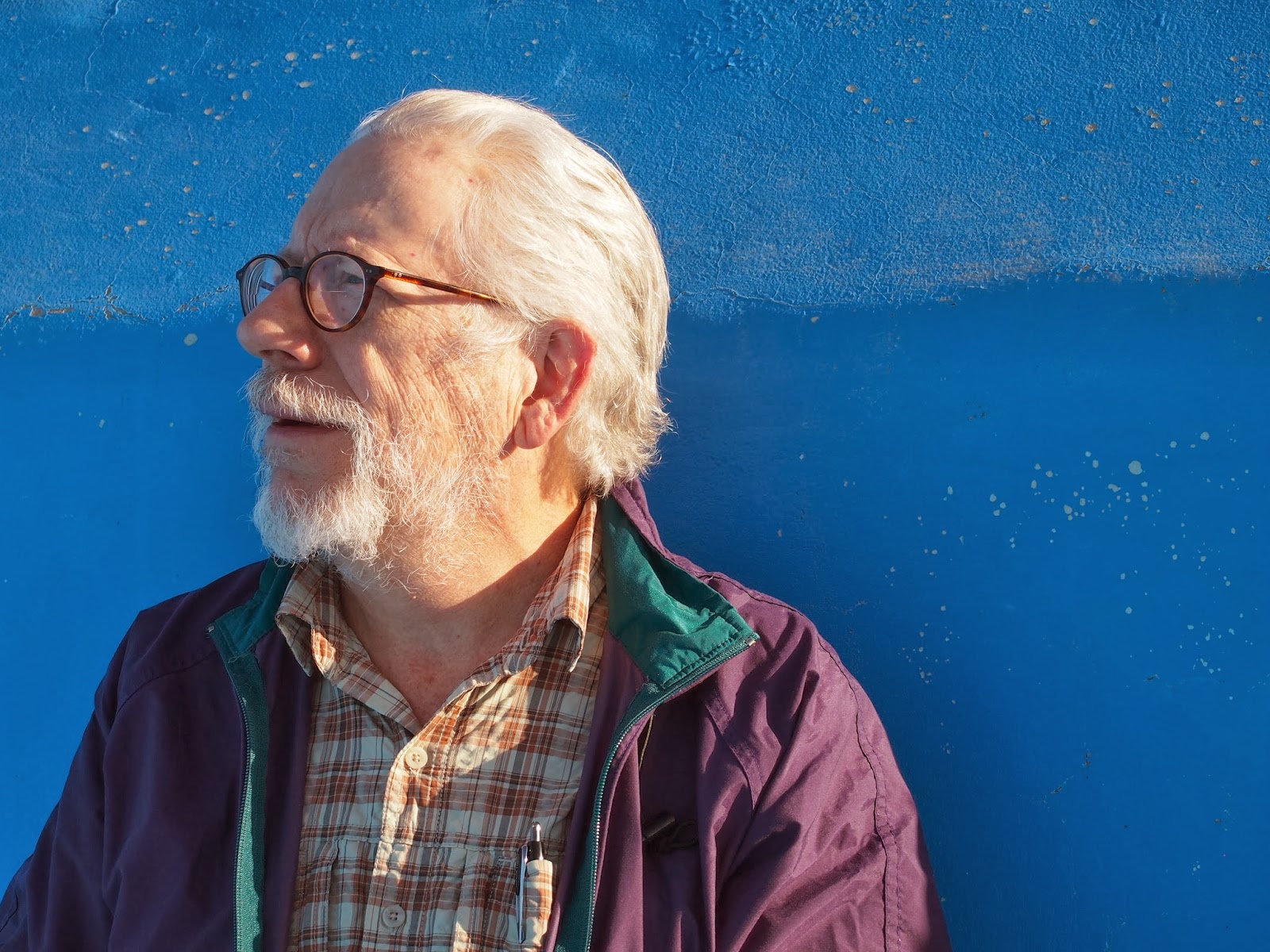 1 - How did your first book change your life? How does your most recent work compare to your previous? How does it feel different?
It’s hard to say how any of my books changed my life, because I don’t know how my life would have been without them.  It’s probably better to think that my life changed my books.  Or that both processes were present.  Every book or period has been different, once I’ve worked in a particular mode for a while, I get bored, and do something different.  That is, my life/writing are in constant evolution/change.  So over the years, from my first work to my present, there have been major changes.

2 - How did you come to poetry first, as opposed to, say, fiction or non-fiction?
As a very young child I was fascinated with what seemed like a strange magical power in words and in their written manifestations.  So I spoke and wrote from that mind-set.  I didn’t know it was poetry; at first I didn’t know there was such a thing as poetry.  In a lot of ways what I wrote then and what I write today isn’t poetry at all.  Whatever it is, it’s something I very much need to do.  I actually spend more time reading fiction and history than poetry.

3 - How long does it take to start any particular writing project? Does your writing initially come quickly, or is it a slow process? Do first drafts appear looking close to their final shape, or does your work come out of copious notes?
It takes about 1 second or less to start.  Usually.  But overall, there have been instances in which all of the above would apply.  Generally, these days, I start right off with no fuss, and do some revising, usually all on the same day.  Almost always, when I start writing, my first impression is that what I’m writing is some kind of awkward cornball crap.  I’ve learned to ignore that feeling; it’s probably a kind of illusion created by a feeling that some what I’ve written in the past was pretty good and that it would be impossible to come up with something new as good as that.  Of course, for all I know some of it, at least, is awkward cornball crap.

4 - Where does a poem usually begin for you? Are you an author of short pieces that end up combining into a larger project, or are you working on a "book" from the very beginning?
All of the above, often simultaneously.

5 - Are public readings part of or counter to your creative process? Are you the sort of writer who enjoys doing readings?
When I started doing extensive public readings/performances in the late 1970’s, I learned a lot about the sounds and rhythms of language.  I had been an actor in college and afterward, and I found that performing my poems from that mind-set made a lot of sense.  I know it affected how I write.  The text has to work for a speaking voice.  As well as in all the others ways a text needs to work.

7 – What do you see the current role of the writer being in larger culture? Does s/he even have one? What do you think the role of the writer should be?
The role varies enormously depending on the culture.  The poet in Latin America has a very different place than he does in North America, for example.  I don’t think there’s a “should” in this; the poet’s “role” is what it is; it’s not something he or she, as a poet, has much control over.

8 - Do you find the process of working with an outside editor difficult or essential (or both)?
Usually it’s useful and interesting.  Maybe only once or twice in my life have I found it annoying.  It’s not essential for what I do, but it can have some value.

9 - What is the best piece of advice you've heard (not necessarily given to you directly)?
It’s only poetry.  (This is advice I give myself.)  Cf. no. 3 above if you feel that what you’re writing is awkward cornabll crap.

10 - How easy has it been for you to move between genres (text work to visual/concrete to sound works to critical prose)? What do you see as the appeal?
Very easy.  Since I’m not so much interested in “poetry” as in how language works to help me know things, it feels completely natural to work with it in all kinds of contexts.  More than a poet, I’m a “language artist” perhaps.

11 - What kind of writing routine do you tend to keep, or do you even have one? How does a typical day (for you) begin?
I write all the time, in different contexts and at different times.  The important thing is to keep doing it, even if you don’t quite feel like it at a particular moment.  Do it anyway.

12 - When your writing gets stalled, where do you turn or return for (for lack of a better word) inspiration?
I’ve never had that problem.

13 - What fragrance reminds you of home?
Garlic simmering in olive oil.

14 - David W. McFadden once said that books come from books, but are there any other forms that influence your work, whether nature, music, science or visual art?
All of those and many more.

15 - What other writers or writings are important for your work, or simply your life outside of your work?
I can’t imagine a life where the ONLY thing I did was “be a writer”.  I’ve had, and still have, quite a rich life in many arenas other than literature.  That life provides the form(s) from which I can write.  As far as compiling the list of other writers that are important to me...  I’ve done that many times, and tire of it; I always forget some names.  There are many.  Let me just say that many of them come from Latin America, which relates to the fact that much of what I have written in recent years has been in Spanish.

17 - If you could pick any other occupation to attempt, what would it be? Or, alternately, what do you think you would have ended up doing had you not been a writer?
An archaeologist, a musician, a cook?

18 - What made you write, as opposed to doing something else?
Beats me.  I think it’s part of my biology.  Sometimes I say that I write in order to have something I really want to read: there’s some truth in that.

20 - What are you currently working on?
Poems, visual poems, performances, recordings, photography, etc.  In terms of “poetry”, it seems I’m working on a 3rd volume in what may be a trilogy, the first 2 volumes of which are LIBER X and OLVIDOS, published by Luna Bisonte Prods in 2012 and 2013 respectively.

I appreciate Mr Bennett's love for the scent of garlic simmering in olive oil, and would simply say that, having written only one book (in as long a life as his more or less), and one less than an inch thick at that, were his Readers to dedicate as much time to it as to his lifetime literary oeuvre, I would feel a sense of balance setting in. Said and unsaid, as it were. Regards, Nail Chiodo