Eleni Sikelianos, The Loving Detail of the Living & the Dead

A man called Dad walks by
then another one does. Dad, you say
and he turns, forever turning, forever
being called. Dad, he turns, and looks
at you, bewildered, his face a moving
wreck of skin, a gravity-bound question
mark, a fruit ripped in two, an animal
that can’t escape the field. 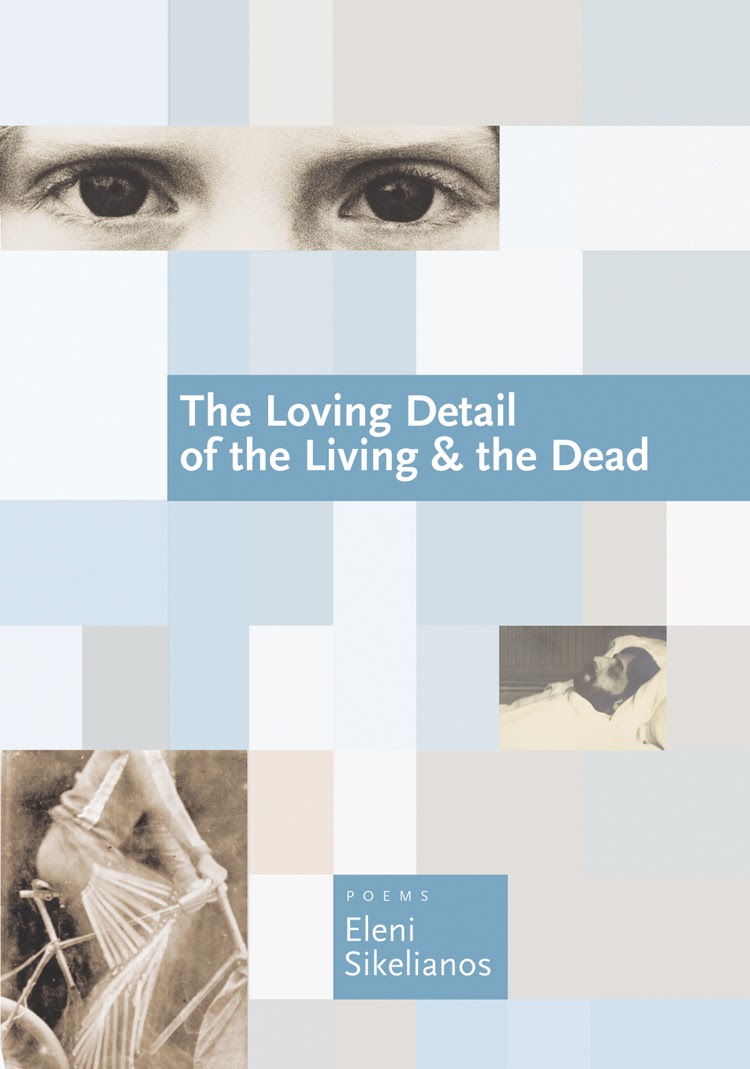 Denver poet Eleni Sikelianos’ seventh trade poetry collection is The Loving Detail of the Living & the Dead (Minneapolis MN: Coffee House Press, 2013). Before this, I’ve been aware of a number of her titles, including her infamous The California Poem (Coffee House Press, 2004), but have only read her “hybrid memoir,” The Book of Jon (San Francisco CA: City Lights Books, 2004). Discovered in a used bookstore in New Orleans, The Book of Jon is a book that discusses and explores her complicated relationship with her late father, a book that adds colour to this new collection, specifically poems such as “In the Airport,” adding entire layers that otherwise might remain hidden, or merely suggested. After reading The Book of Jon, it would be impossible to read such a poem without that pallor, and perhaps that is entirely the point. Perhaps this is the author detailing her “living and dead” throughout lyric passages that suggest, refer, discuss, explore and outright explain, running as a personal thread through the entirely of her writing, and she dedicates this collection to five different names, including Poppy Sikelianos (1951 – 2007). Sikelianos’ poems in this collection explore the length of the lyric sentence, stretching the cadence of the line, as in the poem “Charlene is talking about,” that begins: “Thundersnow, and the way a man can smell like a moon, a woman / like a man; the smell is her shadow; sound is [.]” Her poems write of the living and the dead, of those lost, of dying, of living in the world, and states of being, such as in the poem “An And and Thought,” that begins:

I found an and
and thought

what if this were America, this room?

I found an if and
if it were France?

Let us go on cultivating these fields of error

There is the element of the collage to her poems, as though the poems themselves aren’t enough to contain all that Sikelianos puts into them, helping to suggest that the poems are instead all part of some larger container. The poems suggest that her unit of composition is not the individual poem but the book as a whole, allowing the collage to read as a deeper and far more complex tapestry. As she writes in the poem “Shadow Zoo”: “These are the things that detain the soul of the mind: / Shadows, flames, trees, columns, dolls, pools, children, Polaroids, carbon, waste // Bluff and counterbluff thrown across the oceans streak their shadows sea-bottom and /// if your shadow lit / lit up / if your shadow were aflame [.]” The details are too many to count, and she carves each one with care, adding and collecting and crafting into a remarkably detailed and expansive canvas. Sometimes there are details that pass quickly by, as others catch and refuse to let go, whether “my fact decayed in the light” that ends the poem “Black-Out Fabric — What I Found There,” or “Make a poem / that descends in the mirror […] / then comes back out” that opens her poem “Instructions.” The Loving Detail of the Living & the Dead reads a collection of poems that are exactly what the title tells us: poems exploring the way that we live in the world, as well as touching upon large abstract concepts of death, the heart and the soul), and how we remember those and what has long passed by. This book has a very large heart, and one that contains multitudes.

The skin slips off by a strange arrangement

once sure as cream

spinning the human voice
around the atom, cracks it

my little bird-&-meat
(holds out her hand, bends her fingers), say hello
to this time-eating spider