I abandon my self
to a blushing
of precise boundaries,
like where a squirrel would
step up to snap the branch
back fast enough
to ride the torque all the way back,
a walnut under each arm –
getaway with intent to spring
rather than English leave.

It’s why I wear my
shirts backwards
& my jacket is the color
of the sky.

I’d abandon everything
for a plush spring
with a fat calendar,
every day ringing a bell
every day floating
in a penumbra of sound
echolocalic lenses unfurling
coiled batwings flap
as I velociraptor
among rainy streets & thread
on a knotted length of fishing line
pinpricks of orange brick
mixed with holiday sweat.

You abandon yourself
to the runnels & channels
of a new boundary,
ankle-deep sliding
thick transparency mirroring
even when disrupted

the thick marine light
located by inference
the waggle of a last leaf &
two minutes of leaping edit
is a spray of divided attention,
your lupine shoulder dropping
hot science on cold water. (“A Letter to Hammertown”) 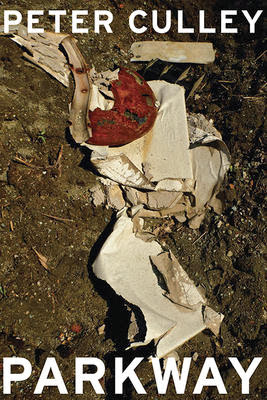 The concluding volume in Nanaimo, British Columbia poet Peter Culley’s “Hammertown” trilogy is Parkway (Vancouver BC: New Star Books, 2013), following the volumes Hammertown (New Star Books, 2003) and The Age of Briggs and Stratton (New Star Books, 2008). As the back cover of Parkway tells us, “‘Hammertown’ is French Oulipo writer George Perec’s invention, an imaginary finishing port on Vancouver Island that Peter Culley recognized as his own home town of Nanaimo.” In this alone, it would seem as though Culley’s “Hammertown” works to be a blending of what he might know of Nanaimo (where the author has lived for most of his life), and what he recognizes in Perec’s articulation of the fictional fishing port. In his review of the original Hammertown in Canadian Literature (#184; spring2005), critic Ian Rae writes:

This industry is responsible for the “pulpy sulphur rain” falling on the hometown of Nanaimo poet and art critic Peter Culley. Inspired by a reference to a village on Vancouver Island in George Perec’s Life A User’s Manual, Culley imagines in Hammertown how Nanaimo might have appeared to the Oulipo poet. Culley does not paint a realist portrait, but rather seeks to capture “the syntax of place” as Perec might have perceived it. I doubt that the syntax of either Paris or Hammertown compels a farmer to remark that “cattle from untasted fields do / bitterly return,” but overall the collection provides some interesting interpretative challenges. Given the Perec epigram, one hunts for acrostic-telestics, hidden algorithms, omitted letters of the alphabet, or some guiding principle for the shifting subject matter. For example, a third of the collection consists of sequences of seven-line stanzas, each containing roughly seven beats per line. This form conveys a sense of rhythm and looks very nice on the page, but in what else the poems cohere I have no idea. Culley, like Laba, hopes that the tactility of words and the delirious struggle of the mind to cope with incessant change are pleasure enough. One may wish to worship with Culley on the “prayer-rug of faded beach,” but he no sooner introduces this rug than he pulls it out from under the reader. Dizzy and confused, the reader lands in a world where “speech or its opposite / flutters the blinds / at the moment of sleep.” In short bursts this dizziness is quiet pleasing, but longer episodes induce sleep after all.

Parkway contains a curious range of poetic responses, including poems after Wallace Stevens (“Cruel Summer”), for Kevin Davies (“Pause Button”), for Bernadette Mayer (“November Day”), for Bernd Heinrich (“North by Northwest”), for Theo Parrish (“Ugly Edit”), for Lary Bremner (“Five North Vancouver Trees”), for Maxine Gadd (“MAX POWER for Maxine Gadd”), for George Stanley (“Inland Empire”), and in memoriam Jonathan Williams and Gerry Gilbert (“Sampler”), all of which play off phrases, lines, titles or structures of those he has dedicated the individual poems to. Throughout the collection, Culley acknowledges industry, personal history, social commentary and the eco-poetic, as he opens the poem “Sampler” with a mention of “The Rural Parkway – Wooded / is characterized as / the ‘cut through the forest’ / quality created by / the regularity of the forest edge / and by the relative closeness / of the forest to the roadway.” The third of the eleven-section poem reads:

A newly formatted
raven’s tongue
pops digitally out & in

no basslines from inland terraces
or hoots from hominid heights,
offroad daytrippers drop

bent under a towhee
the tread of a groundwater smeller
rumbles through the cellar.

Nearly in point-form, Culley articulates his hybrid, “Hammertown,” writing out a space created fiction, imagination, history and memory, and one that incorporates numerous threads and articulations from other writing. The book includes a cover photo by the author, the piece “Angelus Novus (for EF),” of what appears to be fragments of discarded/found materials. In Parkway, Culley blends and weaves his poems from similar materials, and manages to create something part memoir, part city-biography and part myth. Whether taken as a single work, or trilogy as a whole, the project is fascinating, and the work shimmers in and out of focus like a shifting photograph. Peter Culley has long held an intriguing position in Canadian writing, and the press release describes him as a “Kootenay School of Writing hang-around in the 1980s,” allowing him a lengthy period of being known for his obscurity, and possibly better known by name than his actual writing. For example: I’ve known of his name for years, but haven’t a clue what kind of work he doing before this particular trilogy, and can only hope that the publication of the third book in his “Hammertown” allows his work to gain a wider audience. I’m curious to see where his writing will go next.