God knows the creative process is a mystery. To make something out of nothing, to see a world in a blank page, to hear imagined people speak, to touch things that aren’t there, to taste what is not yet baked, to speak volumes or write an image is something to wonder at, something awesome to behold. Yet these are the things that artists do every day. These are the tasks, pleasures and pains that artists, including poets, undertake. Transmitters of acts of the imagination, poets use language to make their unique works of art. But how do they do this?
This is one of the many questions we asked Quebec’s English-language poets over the four-year lifespan of the online literary magazine that we, along with Elias Letelier, founded on June 24, 2009, Quebec’s Fête Nationale. We were curious about their process but we also wondered whether living in Quebec and writing in the language of “les autres” meant anything aesthetically, socially, culturally and politically. We had a poetic and political agenda. Poetry Quebec, or PQ, was a conscious and deliberate nod (and wink) to Quebec’s separatist party, the Parti Québécois. We wanted through our tongue-in-cheek name and motto, “Je me sousviens,” to signal that Quebec’s English-language poets are Quebec poets who were, are and will be here to remember and be remembered. The name and motto were also a manifesto of our engagement.

There is something very familiar in the framing of the new collection Language Matters: Interviews with 22 QuebecPoets, eds. Carolyn Marie Souaid and Endre Farkas (Winnipeg MB: Signature Editions, 2013). The press release begins:

Is writing in English in Quebec a political act? An act of survival? An act of defiance? An act of futility? An act of celebration? For answers to these questions, look no further than Language Matters, a series of candid interviews with some of Quebec’s – Canada’s – most interesting and innovative poets, which launched on Tuesday, September 10, 2013. These are poets who write in the dominant language of North America, but are the linguistic minority in a francophone culture – a minority within a minority. Living in the birthplace of Canadian poetry that gave rise to A.M. Klein, F.R. Scott, Louis Dudek, Irving Layton and Leonard Cohen, how do these poets view themselves and their already marginalized art? 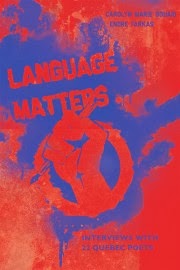 There is something familiar here, and even curious: but for the date mentioned within, this blurb could easily be included on the back cover of a similar collection of essays twenty, or even forty years earlier. Have the questions really not changed during that period (or for that matter, the poets one might cite as precursors?)? As someone who grew up just on the other side of the Quebec border, I’ve a curiosity about such questions of landscape and geography, and wonder if there should be further questions in other regions that should also be repeated to the writers within, to allow a different perspective on other types of geographies, their politics, language and considerations of local space. Over the years, co-editor Endre Farkas has worked tirelessly to promote, encourage and explore English-language poetry in Montreal specifically and Quebec and the rest of Canada generally, through his work as one of the original Vehicule Poets in the 1970s (the group that helped give rise to Vehicule Press, where he was one of the founding editors) to later founding The Muses’ Company in 1980, to editing, co-editing and/or contributing to anthologies such as 10 Montreal Poets at the Cegeps (Montreal QC: Delta, 1975), Montreal English Poetry of the Seventies (Montreal QC: Vehicule press, 1977), Vehicule Poets (Montreal QC: Maker Press, 1979), CrossCut: Contemporary English Quebec Poetry (Vehicule Press, 1982), Canadian Poetry Now (Toronto ON: Anansi, 1984), Voix Off (Toronto ON: Guernica, 1985), The Other Language: English Poetry of Montreal (The Muses’ Co., 1989) and Quebec Suite: Poems for and about Quebec (Winnipeg MB: The Muses’ Co., 1998). Farkas has spent decades working as an English-language poet in a geography and political landscape where he has been very much part of the minority, and through such, his efforts have allowed certain writers to become known and even flourish where they might not have otherwise had the same opportunities. But the question of the book becomes: have the questions one poses to writers in such a landscape really not changed over the years? It’s as though the framing of the collection doesn’t give nearly enough credit to the scope of the book’s content, and the engagement each author has with questions goes far beyond those suggested on the cover. When asked “Would you say that writing in English in Quebec [is] a political act?” in her interview, Erin Moure answers:

Originally conducted to be posted on their online Poetry Quebec (a website that arrived with much enthusiasm, but seems to have disappeared), the collection includes a selection of a series of interviews conducted over four years with poets Stephanie Bolster, Mark Abley, Erin Moure, David McGimpsey, Mary di Michele, Gabe Foreman, Catherine Kidd, Richard Sommer, Maxianne Berger, Steve Luxton, Robyn Sarah, Mahamud Siad Togane, Susan Gillis, Brian Campbell, Charlotte Hussey, kaie kellough, Moe Clark, Jason Camlot, Gillian Sze and Angela Leuck as well as interviews with the editors, Farkas and Souaid, themselves. The interviews (each including a poem or two by the interviewed poet) connect through a common concern with the intricacies of language (including multiple languages), and each speak of their engagements with Quebec writing, writers and the immediate landscapes in which they live. As Susan Gillis says in the space of her interview, “Living in English in Quebec is a political act.” She continues:

History and culture are living continuities. Writing and working and living in a minority language create an active engagement with those living continuities, a kind of claim-staking: Look, here’s my little corner of history and culture, alive and well and kicking. Not threatening, just being. I suppose for some Quebec nationalists, any other culture’s activity is threatening? Or the very notion of “just being” is false? I don’t see my work or myself that way, but that doesn’t mean others might not.

for an english writer, provincial boundaries dissolve. the nice thing abt writing & performing is that it can travel. if english writers were restricted to publishing & presenting their works in québec alone, then i might feel that working in english is a political act. but english writers can publish throughout north america: the markets for our work are much larger than the markets for french work. when my first book was published, it was launched in vancouver, ottawa, toronto, and montréal. further, i was eventually invited to read across the country - in halifax, calgary, gabriola (bc), saskatooooon, etc. [...] a french-language poet might get to launch a first volume in montréal, ottawa, and québec city, if lucky.

What does it mean to be an English-language Montreal writer, or more broadly, an English-language writer in Quebec? For some the question is essential, and for others, the question is a curiosity, nearly in passing. For some writers, these questions might be entirely irrelevant to the ways in which they write. Thanks to editors Farkas and Souaid, the question allows the answers to showcase the ways in which the landscape has shifted over the years, and just how much has remained the same. I’d be curious to hear others respond to these questions, such as Montreal-based writers Sina Queyras, Jon Paul Fiorentino and SusanElmslie, as well as some of the younger writers slowly emerging in the city, such as Helen Hajnoczky and Kirya Marchand. This is very much a collection built originally not as a book, but as a series of online one-offs which, when collected, might show the occasional gap or two. One hopes that further work, and/or a second volume might be down the road?

Thanks for the review of Language Matters. I read it with interest and felt that since in your review, you posed some questions of your own, it/they deserved a response.

The question about writing in English as a political act, you suggest, could have been posed twenty or forty years ago. You are right. However, the fact that Carolyn and I felt that it had to be asked reflects our belief that the same issues are still around and are still relevant. I know that this question to those living outside of Quebec is as alien as the worry about whether there is a French version (30% larger than English) of "OFF/ON" on light switches.

It is interesting to note that the "older" poets engaged with the question of about the "writing in English as political act" more than the "younger" ones. I remember in the 80s, being on juries of CALQ (Conseil des arts et des lettres du Quebec) when both French and English applicants were lumped into one batch and an 80/20% measure applied to the awarding process. I remember writing a minority report each time after my duty was complete stating that there should be and English/French section for applications, like at the CC— where, by the way, the breakdown was 60/40. This division was instituted a few years later. I also caused a bit of a furor in the 90s while running The Muses' Company. In an open letter to The Gazette, I stated that I would no longer be submitting any works to the Prix de Montreal because there was no way in hell were they ever going to give it to an English book. I mean, they had never even shortlisted Mordecai Richler, Leonard Cohen, Irving Layton— so what were the chances of a Van Toorn, a Gold, a Souaid or a Farkas, ever getting on the shortlist, let alone winning? A few years later, they did award it to Solway, but since then, nada. More recently, in Poetry Quebec, Carolyn, Elias and I raised an objection to the call for the position for a poet laureate of Montreal. The application came out only in French and only after our objection – and later – did they bring out an English version. As far as I know, no English-language poet has been considered.

I give you this timeline to show that the question about writing in English being political is still a question that has to be asked. And the fact that you raise it, just underlines its current relevance.

And as for the "matter, the poets one might cite as precursors?", it is a strange question. Who else would one quote but those who were writing and engaged at that time?

And about the poets you said we left out. FYI, we did invite Sina and Jon Paul to participate in our interviews, but heard nothing back from them. And about the young, we consider that Gillian Sze, Moe Clark, Gabe Foreman, kaie kellough (though graying around the temples) fill that quota. The names you mention might be worth keeping an eye and ear out for.

We based the book on the questions asked in the PQ interviews and followed them up (for the book) with others that engaged each poet's particular aesthetic and situation. We think that we presented a wide range of poets with a wide range of aesthetics which reflect the world class, cosmopolitan work produced here in Quebec by our English-language poets.