My artistic practice is and always has been based on the creation of fictive characters who perform distilled psychological, social and experiential narratives in painting tableaux, drawing, and painting-based installation. Central themes that have occupied my work have included issues of desire and sexuality, gender identity, intimacy, and relationships to self and other. Over the past number of years I have worked in thematic series, beginning each with a conceptual framework and then allowing an intuitive and improvisational layered painting process to determine the eventual form and content of the work. In this way, my process has the quality and sensation of being a director, writer, casting agent, costume and set designer, for a compressed film or fiction that slips and glimpses, and that occupies a single field—yet remains unfolding. (Eliza Griffiths) 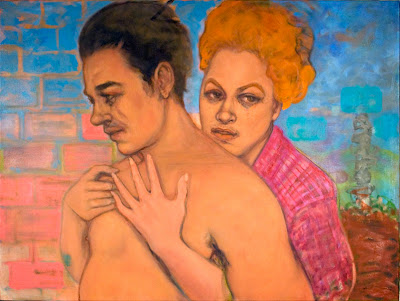 It’s great to see the work of former Ottawa visual artist Eliza Griffiths featured in the new issue of Grain magazine, subtitled “home-myths” (a detail of her "Love Story/Fear Eats the Soul (after RWF)," 2013, is reproduced on the cover). Griffiths was one of the early members of The Enriched Bread Artists collective over on Gladstone Avenue, and I featured her work in an issue of Missing Jacket magazine back around 1996. There is something about her work that has always been quite striking; able to paint variations of similar faces, and yet, each managing their own personalities. As always, the details are deepest in the eyes, becoming more ghost-like as the image ripples outward. The characters she paints exist almost entirely within the scope of the face, and she manages to create real people we haven’t yet met.

The issue themes around a fairly familiar trope – the idea of home, and the myth-making that can’t help but occur. “We mythologize our past,” editor Rilla Friesen writes in her “Editor’s Note.” It harks back to a line from John Newlove, in which he reminded us that the past is, indeed, a foreign country. As Friesen writes: “The works in ‘Home-Myths’ each have a different balance of geography/love. If there is no fixed home place, the need for love is increased.” I’m uncertain I agree with her thesis—she should read the piece Yann Martel wrote, “Philadelphia Green Blue – Musings on the Meaning of Home,” from the anthology Writing Home: A PEN Canada Anthology, ed. Constance Rooke (Toronto ON: McClelland and Stewart, 1997). Home is simply an idea, and to have no specific sense of home does not necessarily make one groundless. Still, there are some impressive pieces in this issue, from the short, descriptive lyric of Anita Dolman, the myth-lyric of Jessica Bebenek, and the two historical/myth lyrics by Catherine J. Stewart. There are pieces here on Snow White, Daphne and Apollo, weddings, Lamborghinis, Mahler, Freud and Nazis, millennials, and various incarnations of what could be called home.

Over 70 years, Galena ore—
silver, lead, zinc—clawed out
of the mountain, ballast
shipped out of the valley.

Barite, white dust dredged
from the tailings ponds, rose
from the ore trucks and settled
into the clothes hanging on the line. We
wore it to school, basketball games.
We danced in it.

The ducks we plucked
on the hillside, breasts filled
with shot made from Galena ore,
lead finding its way home (Catherine J. Stewart)

I first read "Galena" at a Descant editorial meeting last winter (we were passing around some of the latest published journals). Wow, I thought, who is this person? Glad to see her work being shared online. I now know that this poem and the other one published in this Grain issue, "My Father's Gift to My Mother," were nominated for the 2013 National Magazine Awards. Thanks for this post.