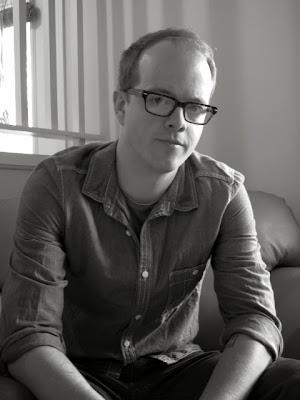 Danny Jacobs grew up in Riverview, NB. His poems have been published in a variety of journals across Canada, including ARC, Event, The Antigonish Review, Riddle Fence, The Malahat Review, The Fiddlehead, Grain and CV2. After living in a number of cities and towns in the Maritimes, Danny is back in Riverview and works as the librarian in the village of Petitcodiac, NB. Songs That Remind Us of Factories is his first book.

1 - How did your first book change your life? How does your most recent work compare to your previous? How does it feel different?
It just came out so I guess I will have to see how much it will change my life. It is pretty surreal to finally hold the book, though. The big thing for me is working through all that post-first book writerly angst regarding what comes next.

2 - How did you come to poetry first, as opposed to, say, fiction or non-fiction?
You could say I came to fiction first. I always wanted to write fiction and I did a fiction thesis during my Creative Writing MA in ’08 (UNB). I still love short stories but I don’t know if I am the best at writing them yet (and I haven’t tried the form in years). I wrote poetry along with fiction during that time and I just kept at the poetry—it’s what I felt was working better.

3 - How long does it take to start any particular writing project? Does your writing initially come quickly, or is it a slow process? Do first drafts appear looking close to their final shape, or does your work come out of copious notes?
I vary between two extremes—some poems change little from first drafts; I write them and think to myself “that’s done” and I’m happy (as happy as one can be, which is never completely). Then there’s some I continually tinker with and tear apart and rebuild and add new paintjobs to and then stand back and notice how gaudy it is and then sand blast it.

4 - Where does a poem usually begin for you? Are you an author of short pieces that end up combining into a larger project, or are you working on a "book" from the very beginning?
If I’m going to be honest, I think the book that just came out is a collection of what I think are my best efforts of the last, say, six years or so. I think this is the case for many first books of poems. Or most books of poems? You find common threads after the fact.  I don’t think I have the attention span to do a full-length themed collection—I jump around too much. I like to write a poem about oxen and then jump to the Higgs Boson.

5 - Are public readings part of or counter to your creative process? Are you the sort of writer who enjoys doing readings?
I love public readings and I think it’s valuable for non-poetry readers, or occasional poetry readers, to attend them. I once had a friend who didn’t read any contemporary poetry get really excited about the sounds I was making while reading my poems. That’s a really wonderful compliment. Readings make people pay attention to the music – the rhythm and cadence – of a poem. No wonder most poets read their stuff aloud while drafting it.

6 - Do you have any theoretical concerns behind your writing? What kinds of questions are you trying to answer with your work? What do you even think the current questions are?
This is a huge question. I don’t think my work could be couched in an overarching theoretical framework. Like I said, I jump around. One of the big theoretical concerns with a lot of contemporary poets right now seems to involve reconciling scientific thinking with poetic thinking. Or trying to integrate scientific terminology and concepts in their work. One thinks of Matthew Tierney, Gerard Beirne, Adam Dickinson. This kind of thing interests me a lot and makes for fine poetry. I also get a real charge out of poets who use very contemporary diction, themes, settings, etc. in poems—detritus from Late Capitalism, if handled deftly, can make incredible poetry. One thinks of Michael Robbins’ Alien Vs. Predator, a book that knocked a lot of people out.

7 – What do you see the current role of the writer being in larger culture? Does s/he even have one? What do you think the role of the writer should be?
Most writers try to tap into the culture at large and hold a mirror up to its vulnerabilities. Great writers do a damn good job of this. They throw back at us the shit we say and do and ask us to lay with it for awhile. I think this is important, this reminding us of who we are at this tenuous stage in the game.

8 - Do you find the process of working with an outside editor difficult or essential (or both)?
Essential and, in my case, not difficult. My editor at Nightwood was fantastic and made it easy. You hear these stories about editors and writers butting heads. I didn’t have these problems.

10 - What kind of writing routine do you tend to keep, or do you even have one? How does a typical day (for you) begin?
When I wasn’t working another job full time (and getting financial aid from a grant) I wrote in the mornings. I work full time as a librarian now so I obviously have to rework when and how I write. And I’m still dizzy from the book coming out so I don’t have much of a writing routine. I grab snatches of time when I can, but I work better with a routine so I’m still trying to figure out what that could be.

11 - When your writing gets stalled, where do you turn or return for (for lack of a better word) inspiration?
No one particular place or thing gives me inspiration. And I think this is good for a writer— it works better when you’re attentive to your surroundings, open to let anything, at any time, bonk you on the head the right way.

12 - What fragrance reminds you of home?
I wish I could say cow patties or haymows or freshly chopped wood but I grew up in the suburbs and I think they all smell alike—a kind of non-smell. Cut grass, maybe? What does the inside of a convenience store smell like?

14 - What other writers or writings are important for your work, or simply your life outside of your work?
My initial reaction is the clichéd one: there are too many to name. This may sound ass-kissy or something, but I consider myself lucky to be living in a country that has such a vibrant poetry scene. So many great presses have wild poets pulling things off that I couldn’t even imagine attempting. Over the past, say, 10 years, there has been so many amazing books. Our country has Ken Babstock, Don McKay, Karen Solie, David O’Meara, Matthew Tierney, Jeramy Dodds, Carmine Starnino, Elizabeth Bachinsky. To name a few. Awesome. All of these poets mean a lot to me and my writing.

15 - What would you like to do that you haven't yet done?
Finish painting my house.

16 - If you could pick any other occupation to attempt, what would it be? Or, alternately, what do you think you would have ended up doing had you not been a writer?
I started school studying astrophysics but realized very early in my first year of university that I couldn’t hack it.  So being one of those guys who looks at pictures of the very early universe and writes beautiful equations on dry-erase boards all day sounds pretty swell. You use the word “attempt” and I couldn’t attempt this, but it’s a nice daydream.

17 - What made you write, as opposed to doing something else?
Writing is fun. It is hard at times but usually at least a little fun. I could lie and say it is often painful and gut-wrenching and it was my calling and I was compelled to it and I was like John Berryman or something but it wasn’t like that. I think for very off-the-wall geniuses (like Berryman) it’s absolutely like that but for most of us normal and very average and very minor people, it’s probably just fun most of the time and that’s why we do it.

18 - What was the last great book you read? What was the last great film?
I’ve been picking away at Cleanth Brooks’ classic of New Criticism, The Well Wrought Urn. It’s a great book for poets—Brooks takes the springs, cogs, and screws out of poems and lays them out on a clean towel for the reader. While dusty at times, there’s a minimum of bullshit. His close readings show us that great poems, when taken on their own terms, are tiny perpetual motion machines—isolated systems that don’t wind down, each greased piece working in concert.

As for film, I caught some of Jurassic Park on TV last week. Such a cocktail of nostalgia.

19 - What are you currently working on?
I’m trying to write new poems. While I doubt a book-length themed project will ever be my thing, I wouldn’t mind the next book to be a more focused project, in terms of theme. I recently moved back to my home town, so I see some poems coming into fruition that examines the strangeness that comes with moving back to the place you grew up in.