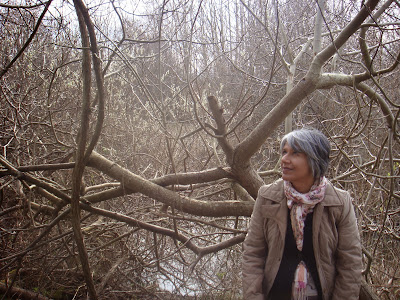 1 - How did your first book change your life? Originally, the first completed series from thecanadaproject took shape as a memoir-manifesto, about place and identity, India to Canada. Then the great rift happened, what Wayde Compton calls, rupture. And then, the voices, terrifying. The weight of it, children of air india. I don’t think I yet know how the change will be.

How does your most recent work compare to your previous? Rueful smile:  er, hopefully, it is better? I’m a slow reader, slow learner. Used to be a fast talker, lawyering into poetry.

How does it feel different? I keep falling into that fault-line, between language and lyric. For example, last year, I tried doing away with “I,” substituting the ego, the personal/confessional voice, with a colon. (  :  ). Yeah. Didn’t go over so well. Still working at it.

2 - How did you come to poetry first, as opposed to, say, fiction or non-fiction? I’ve always jotted down bits of things and only much later, after many other things happened, did I start paying attention to what was coming up, and how it sounded, about texture, internal rhythm. Also, there is Incoming. No escape.

3 - How long does it take to start any particular writing project? Used to be, everything was always a-starting. It were the completion that devilled me. Now, it is the getting into the poem: that is the hard part.

Does your writing initially come quickly, or is it a slow process? Again, this is changing. In general, fast flashes of fragment. Then, the long slow burning.

Do first drafts appear looking close to their final shape, or does your work come out of copious notes? Not a chance on the former. If only! Someone please come and take away this chronicling impulse.

4 - Where does a poem usually begin for you? Usually with a rhythmic pattern found in an arrangement of words: rarely just one word; more likely, a group of them and often this pattern of words is connected to an incident and its place.

For example, this summer,  on a Saturday out in Surrey, B.C., at a brand new public library, I saw a man rant to a security guard about the fact that there were no public pay phones in that lovely new public building. The man who needed the pay phone wore his hair in a ponytail, bruises covered his tattooed arm.  The security guard wore a turban. The more the man yelled about the library not having a public pay phone the more I looked at him. The more I looked, the more he expounded. At no point did I offer the man my cell phone, because I do not own a cell phone. The man swore. He ran out the library. Almost, I ran after him. Before he left, I started to scribble his words on paper: can’t find the paper, will keep looking—anyway, it is not the words, any longer. It is their rhythm.

Sometimes the poem arrives with an image, which, usually, I have to hold close for a very long time.

Sometimes the poem will begin as notes composed in response to another poem (I’m writing a series of response poems to folks like Stephen Collis, Rachel Blau du Plessis, Bhanu Kapil).

Are you an author of short pieces that end up combining into a larger project, or are you working on a "book" from the very beginning? Oh, pretty much the former, but not, perhaps, in the way one might think, because I cannot seem to write just the one thing, without it being in relation to another: a cycle of juxtapose and fragment.  Maybe one day I’ll be brave enough to title all my poems, “Coda.”

5 - Are public readings part of or counter to your creative process? Are you the sort of writer who enjoys doing readings? Up till about six months ago, I’d have responded, “I love reading my work in public.” Also, the more I do so, the more I contemplate the nature of performance: how a written poem, spoken, can so easily veer into caricature. Was it cranky nasty P. Larkin who said he loathed poetry readings? Is there a recording of Larkin reading The Whitsun Weddings? Wayde Compton first got me thinking of performance as a site of research for my poems. I think he may have been quoting bpNichol. If I can find a way to stay true to that, then reading in public seems to help the poems.

6 - Do you have any theoretical concerns behind your writing? Yes. I believe so. I do not have the language to describe the concerns. Exegesis frightens, like so much else. (what a timid person emerges from this to and fro: still, doing the work and a member of the resistance). The doctrinal must be approached skittishly, as cat to prey, and usually via intermediaries, found through online rummaging, outside The Academy. Mantra: “We are just beginning to know nothing.” (Bruce Andrews, Lip Service).

What kinds of questions are you trying to answer with your work? What do you even think the current questions are? Dear me, I am nearly fainting away for want of answering, for wanting to answer. Please see above. May my work always seek the questions.

7 – What do you see the current role of the writer being in larger culture? Does s/he even have one? Now these questions strike me as important and so my first response is to shrug and think up glib responses, like, “couldn’t possibly answer.” And this first question, with its qualifier, “current,” and its descriptive, “in larger culture,” demands answer, I think: we must risk something, for the coming troubles. For the dark age ahead. Incoming has us in its grip. Who will speak to it?

What do you think the role of the writer should be? Well, I’m so scared by what I just wrote, I’ll defer to the first part.

8 - Do you find the process of working with an outside editor difficult or essential (or both)? Not only essential, comforting, in an uncomfortable sort of way. Finally, the work can be taken outside of itself, and examined.

9 - What is the best piece of advice you've heard (not necessarily given to you directly)? Transgress! (Betsy Warland/Ray Hsu). Think about the order of things (Peter Carey in a NaNoWriMo pep talk). Without hope or despair (Rachel Rose). Mere persistence can be an act of disobedience. (Sara Ahmed).

10 - How easy has it been for you to move between genres (poetry to non-fiction)? Nothing seems to come easy. I still don’t fully understand this word, “genre.” Some days, everything elides, particularly, poetry/memoir/manifesto/essay. Other times, it is as if they are different countries, guarded by fierce borders.  I’m taking a course with Meredith Quartermain later this month, on meta-narratives. Yeah. There is some b.a. stuff there that excites. What do you see as the appeal? Because a piece of work demands cross-transference.

11 - What kind of writing routine do you tend to keep, or do you even have one? How does a typical day (for you) begin? The best days are mornings, almost immediately upon rising, filled with reading and writing, while my husband is asleep and the place quiet.  After breakfast and after a set of self-prescribed house frau rituals such as making my bed, tidying up, I will sit down to do the work. I can rarely write for more than four hours at a stretch.  If I am working on a series of poems, I try and keep to a schedule. Until Incoming makes its demands. More and more, Incoming takes over the day and then discipline is a sorry thing. Sometimes, approaching midnight, again, the pulse.

12 - When your writing gets stalled, where do you turn or return for (for lack of a better word) inspiration? Reading other poets, writers, that counters the fear. Also, walking, running away from the computer, doing anything with my hands, although I lack even the most basic skill to do pretty much anything else. Took me a long time to figure that out. These days, also, there is prayer, although I don’t really understand what I mean by that.

13 - What fragrance reminds you of home? Once, in a fable, I would have written, “cardamom/ginger.” A trigger, that word, “home”: At first I have nothing to say, because the concept of home fragments. Most days, I feel without a sense of home. That sense propels my writing. Then, if I close my eyes and breathe: cedar, salmon berry. The stink of diesel. Oolichan-rot down at the New West quay.

14 - David W. McFadden once said that books come from books, but are there any other forms that influence your work, whether nature, music, science or visual art? Yep. Pretty much all of that. Especially, the names.

15 - What other writers or writings are important for your work, or simply your life outside of your work? Surprisingly (?), many of them are found on this blog.

16 - What would you like to do that you haven't yet done? Find the courage to travel, because even leaving my house is a big deal, requiring ritual and deliberation. Travel again to India. Visit Ireland.

17 - If you could pick any other occupation to attempt, what would it be? In theory, bee keeping. Also, to be that smith, Macsen/Durga, at the forge, in the bend in the river. Also, the potter, at her wheel.

Or, alternately, what do you think you would have ended up doing had you not been a writer? Unhappy lawyer.

18 - What made you write, as opposed to doing something else? The unexpected death of my father. Marriage and a supportive partner, who said, “get on with it.”

19 - What was the last great book you read? This word, “great,” causes me such a pause, thinking about all the great poetry books I’ve read, or thought about reading, or want to read, but still have not, many of which are listed in your blog. About two weeks ago, I read Roseanna, by Maj Sjöwall and Per Wahlöö. I’m reading Diane Wakoski Greed, Parts 5-7.  Also, Priscila Uppal’s, We Are What We Mourn.

What was the last great film? I rarely go out and see films, my brain being so porous, the image sticks around a very long time and often, story-lines and images then blend into one long spool: Children of Men-District 9-The Hunger Games-Elysium.

20 - What are you currently working on? a novel, an essay about women in the 20th and 21st centuries, and yet another long poem, about Toronto, Paris, Baghdad. Notes on a speculative fiction-essay-poem, about politics in British Columbia.