Lynn Crosbie, Life Is About Losing Everything

We were fifteen and stoned at a doughnut store, five of us, mocking a fat man showing some crack. “Monsieur, ton derrière!” French was hateful, also hilarious to us.
We heard him start to order before we turned to see him.
One. Strawberry. Jelly.
One. Chocolate. Glazed.
We knew about this guy: he had tried to kill himself with a shot-gun and ended up just blowing off part of his face and rearranging his features. He had one tiny eye and one huge, flat eye; a wedge of nose; and a tiny slitted mouth, halfway across his chin.
One. Maple.
We all started to laugh, in sort of quiet seizures.
Shut up, Kill hissed. What if he turns around and kills us?
This was a sobering thought.
One. Hawaiian.
One. Cruller.
It seemed to take the whole night for him to fill the box. We sat pressed together like bullets in a box, empty and cool to the touch. 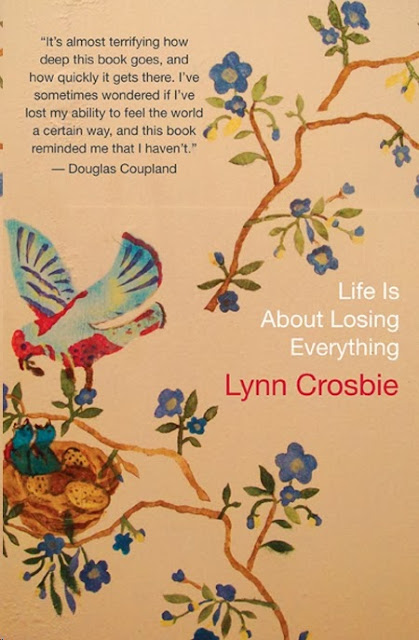 From Toronto writer, editor, critic and columnist Lynn Crosbie comes the semi-fictional memoir of “seven tumultuous years,” her Life Is About Losing Everything (Toronto ON: Anansi, 2012). A book constructed out of individual scenes that exist predominantly out of sequence, Life Is About Losing Everything contains grand, desperate gestures, sharp writing and fantastical stories that plunge the depth of human grief, sadness and desperate loss. The individual scenes attempt to grapple with the question, how did I get here? There is something of Crosbie’s prose that is both deeply aware of the texture and tenure of human experience, and how characters are described in part through what they wear, what they ingest, or even smell like, akin to a moral judgement.

During the 1990s, Lynn Crosbie, along with Michael Turner, was one of the most dangerous writers in Canada. The pinnacle of this was her first novel, Paul’s Case (Toronto ON: Insomniac Press, 1997), a deeply uncomfortable fiction that followed closely to the trial details of Karla Homolka and Paul Bernardo, might be one of the most important novels (in my opinion) to come out of Canadian writing that decade. In the short prose-sections that make up Life Is About Losing Everything, Crosbie doesn’t just use her own life and her own fears as fodder, but manages to harness that same fear, shaping it into something that extends beyond her own immediate pain. Over the course of her first three poetry collections, Crosbie also moved through a version of the same kind of material, writing hard-edged poems that referenced both pop-culture icons and thinly-veiled personal exploits of hers and her immediate circle. It was only through and after Paul’s Case that her writing more overtly explored the pain, horror and damage of others, moving into the poetry collection Missing Children (Toronto ON: McClelland & Stewart, 2003) and the novel Dorothy L’Amour (Toronto ON: HarperCollins, 1999), on the murdered Playboy playmate, Dorothy Stratten.

Some have suggested that the response (some of it quite venomous) to Paul’s Case caused Crosbie’s writing to retreat, and there is something about Life Is About Losing Everything that makes it the most interesting work of fiction she’s produced since: a fractured, fearless, fearful work, one that rages and rants and celebrates and questions and mourns. Her sentences are striking, and she knows how to use them as enticements, weapons and even bludgeons, perfectly formed for full, radiant effect. Memoir by itself doesn’t necessarily make for great art, but there is something about the blend of memoir and fiction that is incredibly striking and raw, with a self-awareness that doesn’t allow it to fall into voyeurism or caricature. I don’t know if her best work comes from what her title suggests, but her thinly-veiled fiction (or, at least the suggestion of such), like the best of her work, manages to risk just about everything, even as she maintains a fierce and fiery centre of calm. Comparable to the best works by Dany Laferriere and David W. McFadden, through Life Is About Losing Everything, something previously lost has been reclaimed. Thank you, Lynn Crosbie.

Posted by rob mclennan at 8:31 AM
Labels: Anansi, Lynn Crosbie