Of disagreements on the history and function of the apostrophe, some sources say it’s used for missing letters or had a start as a printer’s mark to indicate omission, but more interesting is the claim that the “cumbersome name for an awkward mark” is rooted in the Green phrase to “turn away” from the audience when addressing another person. (“Apotropaic Shuffle”) 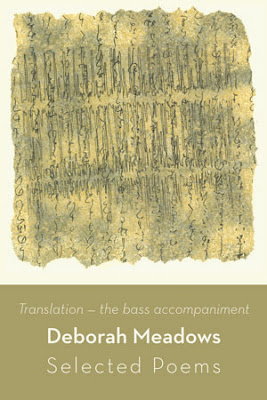 The postman recently delivered a hefty work by American poet Deborah Meadows—her Translation – the bass accompaniment:Selected Poems (Bristol UK: Shearsman Books, 2013). I have to admit, I’ve long been a fan of selected poems, and revel in the possibility of getting at least some kind of overview (one version of such, certainly) across an author’s work so far, especially an author that I wasn’t previously familiar with. Vancouver poet George Bowering has had about half a dozen so far, each one with an entirely different flavor, and each edited and compiled by a different editor, none of which were the author himself. Meadows, on the other hand, gives the impression in her “Prefatory Note” that the selections were hers, which I understand entirely, but am not sure I actually agree with. Shouldn’t some kind of editorial distance exist? And why isn’t there an introduction of any sort? Selecteds, in my opinion (as anyone who follows my reviews already knows), should have an introduction. While I understand the argument that the work should stand on its own, I enjoy seeing at least some kind of context presented for the work, the selection and the overview (an oversight in previous selecteds by such as Dennis Cooley, Lynn Crosbie and Monty Reid, as well). Why has this particular selection been made, and why are we paying attention to it? The author, at least, does provide a bit of insight in her opening note:

Already, that’s quite a heady and intimidating list, and the poems within the collection select from nearly a dozen works produced over the past decade by presses such as Green Integer Press, Tinfish Press, Krupskaya Press, Shearsman, Factory School, Mindmade Books and BlazeVOX [books]. Just who is this Deborah Meadows? There is quite an acoustic gymnastic in Meadows’ work, with leaps and bounds, as in her multiple-book sequence, “The Theory of Subjectivity in Moby-Dick.” Her essay-poems are deep and playful explorations of logic and discourse, engaged with opening up a series of questions through the text. The range of her poetic constructions in such a relatively short time are remarkable, and remarkably broad and precise, willing to move into another territory once a particular project is complete. The lengthy sequence “The Theory of Subjectivity in Moby-Dick,” for example, reads as an ongoing study of the novel, chapter by chapter, as complete as had she sketched out her theory in prose;

Skin remains a question:
“what and where is the skin of the whale?”

What and where is the mind?
Inscribed upon, see through
a brittle clarity, read through spectacles
that make a skin
over skin.

Upon the printed page or
written into flesh as
warm-blooded as ‘we”
yet indecipherable.

Quarters for a child
assuming one more tender
than skin—
bulk mysterious, yet
phenomena present how
rocks connect
to pyramids, as made things.

Borneo
man of nature, specimen body
with skin parsed for warmth.
Specimen-skin made, marked, for sale.

Comfortable with risk, copied
to dominant collection of twoness
dispersed by instruments
identical
to how small easy pieces
can be rendered
and teach these fine creatures how.

There are trace echoes here that connect to entire traditions of British and North American avant-garde writing, managing to blend the two strands together; through her particular blend of lyric, the sentence and theory, I can hear resonances of Karen Mac Cormack, Norma Cole and Tom Raworth, for example. It makes me wonder just how I have managed to have not heard of her or her work, prior to this.

Of self-emptying systems: nihilism. How can “yes” displace “no”? Sunyata replete.

But a substitution theory: the word for the thing, the thing for the other thing, has a “universal” appeal. It’s money. And little in the way of theorizing can interrupt its commerce, its erotic appeal. This rainy heartbreak, that dime-store by the ear of the mob, face out loud. Keep ocarina far from selvage: blew, then method and mathematical certainty. Haul and scrape good Word for importation to godhead, poached and re-set, spring mechanisms and all. Executed by market track, human capital, finance group, our prize, seminar on human entourage if you have the software, foundlings’ Houdini, erased land, term professor, robot message. Hard to see the go-between we are. (“Procuratio”)