12 or 20 questions: with Peter Richardson 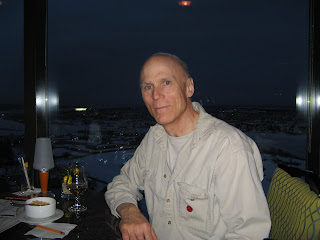 Peter Richardson was born in Norwalk, Connecticut and came to Quebec from Vermont in 1969 at age 20. For 25 years, he was a ramp worker for Air Canada at Mirabel and Trudeau airports. He has published three collections of poetry with Véhicule Press in Montreal: A Tinkers' Picnic, shortlisted for the 1999 Gerald Lampert Award; An ABC of Belly Work (2003), finalist for the Acorn-Plantos People's Poetry Award; and Sympathy For the Couriers (2007), which won the QWF's 2008 A.M. Klein Award. His work has appeared in Descant, Poetry Magazine (Chicago), Sonora Review, The Malahat Review, Prism International and The Rialto (UK) among others. He lives in Gatineau, Quebec.

1 – How did your first book change your life? How does your most recent work compare to your previous? How does it feel different?

Very shortly after I finished A Tinkers’ Picnic in 1999, I was dealing with the one-trick-pony question in my head. The question usually goes: “Is this all I can do?” and “If this isn’t the end of it, what more might I be able to write?” So I found myself recommitted without much of a pause for breath.

I think I draw less on semi-autobiographical experiences now as opposed to when I was writing A Tinkers’ Picnic in the early 90’s. But I still respond to the siren call of eccentric voices via dramatic monologues and third-person lyrical narratives.

2 – How did you come to poetry first, as opposed to, say, fiction or non-fiction?

As a kid, I felt drawn to the work of Lewis Carroll, Dylan Thomas and W.B. Yeats. So I started by writing ghastly imitations, because I liked the way those authors could make language sound. I liked what they were doing with individual sentences and phrases. I think gestating prose stylists tend to look at the sweep of whole paragraphs and chapters. Few of them spend their time ogling two-word jewels like Thomas Hardy’s “latticed hearse” for a “bird cage”. They’re looking at longer bursts of writing. At least that’s the feeling I’ve had about apprentice novelists. In my own case, I’m hopeless at getting characters out of their room and across the street.

3 – How long does it take to start any particular writing project? Does your writing initially come quickly, or is it a slow process? Do first drafts appear looking close to their final shape, or does your work come out of copious notes?

For me, it’s almost always a slow process. First drafts rarely look close to the final product. I might discover a poem begins on line 18 of draft # 42. But by keeping at it, crab-like; I move into territory that’s fruitful. Sometimes I have to do two or three completely different studies of a poem the way I imagine a painter does several different sketches of a subject to find the angle, the point of view, the right mix of light and shadow. It’s spadework. I go from one poem to the next. Yet having said that, I admit there are times when two or three poems are on the go, and then it can be fruitful to hopscotch from one set of drafts to another.

4 – Where does a poem usually begin for you? Are you an author of short pieces that end up combining into a larger project, or are you working on a “book” from the very beginning?

Sometimes it begins with a line or two, sometimes with a feeling. Often a poem begins from writing that needs to go its own graphomaniacal way in order to arrive exhausted at the first line. I’m an author of shorter lyrics. They gradually add up. The idea of a “concept book of poems” is an enigma to me, though I admire those who can write, say, a sonnet series on the Spanish flu pandemic of 1918-1919. I’m thinking of Ellen Bryant Voigt. My longest poem is a five-section number, each section being 17 lines long.

5 – Are public readings part of or counter to your creative process? Are you the sort of reader who enjoys doing readings?

Readings can help you hone pieces you didn’t think needed honing. So they can be helpful in that way. They’re also occasionally enjoyable. You can’t predict what will happen at a given venue and that makes it interesting. And shouldn’t a public reading be part of the process? I’ve heard that Don Coles thinks that for him, giving a reading debases the art for him. So there is the opposing view−the fear that going on tour will make what you’re doing a kind of circus act. But when you consider that sometimes no one shows up for a poet’s tour reading or a book launch, then worrying that it will become a circus act begins to take on an illusory dimension. I should say in passing that I am a Coles fan. I wish he would throw his principles to the dogs
and show up at the Tree Reading Series in Ottawa.

6 – Do you have any theoretical concerns behind your writing? What kinds of questions are you trying to answer with your work? What do you even think the questions are?

None, but I like to pose some aesthetic restraints. For instance, I tend to be very sparing in my use of similes: like this…like that. (Which doesn’t mean I eschew all use of similes. They can be evocative.) As well, I like to pare down my use of definite articles. “The” is a great word, but it sometimes weighs down the boat of the poem. Having said that, I reserve the right to break all my rules. I’m a fan of stanzas because I think they can help a poet structure his or her thoughts, they−stanzas−can provide a template.

As far as answering questions through my writing, I don’t. If someone else sees that I’ve answered a question to something…an aspect of grieving, say, well, fine. I just like well-made sentences. I want there to be some surprise and genuine observation−some thinking on the page. With Avison, you get both thinking and intuitive grace on the page, which is extraordinary.
7 – What do you see the current role of the writer being in larger culture? Does she/he even have one? What do you think the role of the writer should be?

Poets in developed countries have largely lost any role they may have had. Does that mean poetry is an iota less important? No. The excellent lyric still matters. It’s bread. And the poème engagé still matters, though plenty of mediocre politically engaged poems are being written. When I get fed up with some of them, I turn to Auden and see that brilliant civic poems can still be written in English. Novelists are the folks who have the public’s ear though. It’s hardly a tragedy. People want a story.

I think you have to vet your work with several people once you think it’s ready. Otherwise you’re existing in a critical vacuum, which is fine and necessary for short bursts. But ultimately, you need someone to say: “Look, this stanza is superfluous.” Or: “The forward motion of your poem ends here, not where you say it does.” As for having an editor once you’ve got enough material for a collection, yes, I think you need another pair of eyes to collate, organize, and see patterns you wouldn’t see. On the other hand, without an instinct for knowing which suggestions to use, you’re lost.

9. - What is the best piece of advice you’ve heard (not necessarily given to you directly)?

I like Auden’s bit about the poet being willing to present a finished poem before an internal censoring committee which should include the following: a monk, a simpleton, a school girl, a chemical engineer and a loud, foul-mouthed drill sergeant. Sure, it’s autocratic advice, but it’s both amusing and sobering. (By the way, the only characters on that committee list of Auden’s which I recall clearly are the first and the last.)

10. - What kind of writing routine do you tend to keep, or do you even have one? How does a typical day (for you) begin.

I make myself a coffee and write in a basement office for about twenty minutes. That’s before breakfast. Then after I drive our nine-year-old to school, I come back and alternate house chores with writing through the morning. Often, I return in the afternoon for a couple of hours. But for years, I used to work a 14h00-to-22h00 shift at an airport. It wasn’t bad for writing before work, because my day job required very little mental energy. I’d expend most of that good creative energy before I arrived at the punch clock and still be able to toss mail bags into jets.

11. - When your writing gets stalled, where do you turn or return for (for lack of a better word) inspiration?

Slow periods are familiar in that they’re like insomnia. If you make a big deal about your tossing and turning and exclaim: “Oh, my God, I’ll never get to sleep. How will I do that office presentation tomorrow,” etc, you will be cooked. On the other hand, if you say: “Oh, interesting. Okay. I think I’ll get up, eat some cereal, and read something dull”, you’ve accomplished two things: pissed off the genii of sleep disorder and taken a step towards bemusement. That koan-like answer will have to do.

To live another 20 years!

13. – David McFadden once said that books come from books, but are there any other forms that influence your work, whether nature, music, science or visual art?

Everything influences my work. Music. A walk. Something heard on the radio. What people have said beside me on a street corner. I’m part starling.

14. - What other writers or writings are important for your work, or simply your life outside of your work?

William Carlos Williams, Denise Levertov, Wallace Stevens, Elizabeth Bishop, Marianne Moore, Hayden Carruth, William Meredith, to name a few, but there are probably 20 more. I’m currently on a 19th century novel kick, reading what I would have read had I stayed in university decades ago. Middlemarch is my current marathon.

16. – If you could pick any other occupation to attempt, what would it be? Or, alternately, What do you think you would have ended up doing had you not been a writer?

Well, until 15 years ago, I wouldn’t have called myself a writer. It took me years to be able to say I wrote in my spare time. If a colleague at the airport asked me what I did on the off hours, for years, I would say: skiing. That was the only comfortable answer I could give for a long time. As to a dream occupation: I think being a heli-skiing guide in the Caribous through my late twenties and early thirties, would have been fun.

17. – What made you write, as opposed to doing something else?

Early encouragement, and not being able to walk away from the sounds certain combinations of words make.

War and Peace. And Pelle the Conqueror, a Swedish coming of age story.

19. – What are you currently working on?