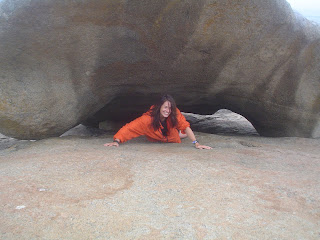 Lea Graham’s first book of poems, Crushes, is forthcoming by No Tell Books in 2010. Her poems, solicited reviews, collaborations, translations and articles, have been published in journals such as Notre Dame Review, Sentence, Capilano Review, Shadow Train and American Letters & Commentary. Calendar Girls, her chapbook, was published in 2006 by above/ground press. She has a Ph.D. in English/Creative Writing from the University of Illinois at Chicago, and is Assistant Professor of English at Marist College in Poughkeepsie, New York. She is a native of Northwest Arkansas.

1 - How did your first chapbook change your life? How does your most recent work compare to your previous? How does it feel different?
Well, one way the chapbook, Calendar Girls, changed my life was that it helped me get a full-time teaching job! More than that, though, it really did help me think about projects or threads that hold any kind of book together. So, in other words, it was kind of a precursor to my book that is about to come out next year, Crushes, (by No Tell Books) in that it helped me to do what I think of as walking the perimeter of an idea or set of concerns—something I associate with Emily Dickenson.

9 - What is the best piece of advice you've heard (not necessarily given to you directly)?
The poet, Sherod Santos, told me when I was 22 years old that “if poetry was important to [me, that I would] get back to it.” I never forgot that all through my 20’s when I was working all kinds of jobs and writing poems on my own. I finally wrote him a few years ago to thank him for that advice because it had proven so true for me during all those years that my life seemed far from poetry in any public way. It turns out that the email I sent to him arrived after the last class he taught before retiring. So that advice seems to have somehow come full circle in its own grace.
10 - How easy has it been for you to move between genres (poetry to fiction to critical prose)? What do you see as the appeal?
I think getting into both creative and critical prose can be a kind of relief from poetry. Sometimes I need to live in language in a different way.
11 - What kind of writing routine do you tend to keep, or do you even have one? How does a typical day (for you) begin?
I almost always write in the morning. I remember David Arnason telling me a few years ago when I was up in Winnipeg, “Save the best time for yourself.” I find that if I write in the morning, I have a kind of confidence about whatever else I’m doing that day. I try to write everyday—even if it’s just to do bits of revision on old poems. That doesn’t always happen, but it’s a goal of which I’m capable.
12 - When your writing gets stalled, where do you turn or return for (for lack of a better word) inspiration?
Well, I don’t like the way “inspiration” is used very much. Maybe it’s because I hear it as too much of an excuse (or lack of it) from my students, bless their hearts! What I do love about that word, however, is that it has to do with breath…what we breathe in and which goes back to place. As I’m running along the Hudson River this morning and breathing in the sweet grass and fishy stink of the river, that seems a kind of inspiration to write. But to really answer the question, I go to other poets, other texts, and art galleries to jumpstart myself. Other than that, I think smart conversations really help me. That’s why so many of my poems start out with something that someone tells me.

13 - What do you really want?
To learn to rock climb, to learn more languages, to experience another companero de alma, regular pilgrimages, and to laugh every day. In terms of writing, I just want to keep doing it. I want to keep being interested in the world and the writing, and to continue. I think getting better and having a sense of your own artistic power comes with practice and devotion. I am both practicing and devoted.
14 - David W. McFadden once said that books come from books, but are there any other forms that influence your work, whether nature, music, science or visual art?
All of the things you list influence me. Probably it’s visual art and nature that are the two most overt influences. I just got back from walking in Galicia and the beauty of that place is still hanging around my mind six weeks later. My brother, who is a scientist, believes that since we evolved within the natural world over such a long period of time, that there is something profoundly home-like for us when we go back into it. I don’t know how that plays out in scientific theories (I mean, I’m not really sure I feel more “at home” in the woods than I do down in Manhattan’s crowded Chinatown!), but I think there might be something to it. What I like while out in the natural world is the awareness of the simultaneity of being in your body and mind that I don’t get in my everyday life. I know my feet are hurting or that I’m thirsty; concurrently, I know I’m mulling over a memory or working out a thought. All of this stuff gets pulled into the work—alongside seeing artworks like Guernica for the first time, or each and every time I listen to Miles Davis version of “Bye, Bye Blackbird” etc.
15 - What other writers or writings are important for your work, or simply your life outside of your work?
There’s just too many to name…but, I always love to go back to Frank O’Hara, Charles Wright and Denise Levertov. Another writer, who I sit with in wonder, is John Matthias. His work is so expansive, and learned and human.
16 - What would you like to do that you haven't yet done?
Mostly, I just want to do more and better: more books, more genres, edit/publish, teach more, etc. Beyond that, travel for me is so important. I didn’t start really traveling until I was about 23 and I don’t plan on stopping. In fact, I think my travels have taken on a more adventurous turn recently, and I’d like to see where that takes me. And the writing.
17 - If you could pick any other occupation to attempt, what would it be? Or, alternately, what do you think you would have ended up doing had you not been a writer?
I can’t imagine not being a teacher, so I think that’s what I would have only been if I hadn’t started really writing. Still, there’s a part of me that thinks I would love to be a Classicist or a vineyard owner, or work for some NGO. I think anything that had something thoughtful and a dash romantic and meaningful about it would have appealed to me.

18 - What made you write, as opposed to doing something else?
Maybe it’s because I had no opportunity to act or dance, and I couldn’t sing, play or paint so well? Or maybe it was because I wanted to enact what I was reading? I always tell my students that I grew up with the language and song of the Southern Baptist Church in my head, and perhaps I wanted to somehow replicate that without all of the dogmatism that seemed to go with it. Gosh, mostly I wanted to do something that didn’t depend on washing dishes or going to bed at a reasonable time.
19 - What was the last great book you read? What was the last great film?
I recently saw 500 Days of Summer. I’m not sure that it was great, but it was really interesting in its “reality vs. imagined projection.” Also, I just saw The Lives of Others which is a few years old, but helped me understand a bit of what artists endured in East Germany before the fall of the Berlin Wall and think about the role of art in the world. I’m currently reading a book called Writers and Pilgrims by Donald Howard. It’s helping me to frame my own pilgrimage, understand those early travels to the Holy Land, and to think about how “travel itself is imaginative.”
20 - What are you currently working on?
Some poems that are too early to tell if they will be a book or not…. Also, I’m working on some scholarly pieces having to do with the Canadian (prairie) long poem and its intersection with Olson’s ideas of place. There are travel essays in the queue, and in particular one having to do with the Camino de Santiago Compostela.
12 or 20 questions (second series);
Posted by rob mclennan at 9:09 AM
Labels: 12 or 20 questions, above/ground press, Lea Graham, No Tell Motel

That's a book I'll be purchasing!