12 or 20 questions: with Sawako Nakayasu 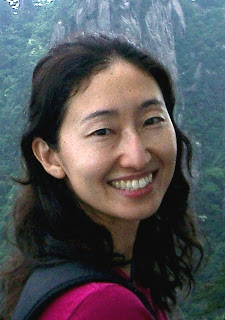 Sawako Nakayasu was born in Japan and has lived mostly in the US since the age of six. Her books include Texture Notes (forthcoming from Letter Machine Editions, 2009), Hurry Home Honey (Burning Deck, 2009), Nothing fictional but the accuracy or arrangement (she, (Quale Press, 2005), and So we have been given time Or, (Verse Press, 2004). Books of translations include For the Fighting Spirit of the Walnut by Takashi Hiraide (New Directions, 2008) which won the 2009 Best Translated Book Award, as well as Four From Japan (Litmus Press, 2006) featuring four contemporary poets, and To the Vast Blooming Sky (Seeing Eye Books), a chapbook of poems by the Japanese modernist Chika Sagawa. Her own poetry has been translated into Japanese, Swedish, Arabic, Chinese, and Vietnamese. More information can be found here: http://www.factorial.org/sn/sn_home.html

It made me very happy, and pleased. I got to give a number of readings in the US, and also in Japan, where I started a kind of bilingual, simultaneous-interpretation-translation-based form of reading. I also realized that my “work” now had a price tag, and that people might read it while taking a crap.

My most recent book is Hurry Home Honey, but it’s actually some of my oldest publishable work – including some things I wrote as an undergrad! Every book feels totally different – the circumstances of life and thought keep changing so much.

I never chose poetry, though I did choose to write, and I’ve dabbled in all kinds of genres. When none of the other teams would have me, poetry took me in. I also harbored a desire to write music, and out of all of the language arts, poetry comes closest to that.

I start a zillion things, and finish a few. Speed varies. Some drafts come out looking close to their final form, while other pieces percolate out of fragments and notes and sketches and revisions. Texture Notes comes from a blog – those pieces came out more or less intact, as did the Ant poems.

Some ideas are bigger than others, and take longer (or more pages) for me to exhaust. Some ideas are poem-length, and some ideas are very very small. I try not to force the issue too much, and stay open to how things go.

I have a slight theory allergy. I don’t really like the question/answer binary – poetry can do and be both.

The writer should write, like the gardner should garden, and the poemer should poem. (Sometimes I get this in Japan: “You write poetry…so you’re a poemer?”)

I’m super grateful to people who put in that kind of time, energy, and effort into my work. Sometimes people will misread it, which can be amusing.

This I heard from John Solt, who got it from Kenneth Rexroth: “There are lots of great writers out there who are shitty people. Try to be a decent human being rather than a great writer.” …or something like that.

I’m not much of a routine-monger, though that may be changing. I’ve used the same blank white notebook from Muji for a number of years now. I’ve tried the routine idea a bunch of times, and I’ve also tried to virtually “clock in” (by sending an e-mail) in order to write for a certain amount of time each day.

I don’t really worry about this too much – it doesn’t bother me if I haven’t written consistently; I’m not the most consistent person. I don’t hunt for “inspiration,” and usually there’s enough around that does that job.

I can’t remember. I hate Halloween, and have a theory that most ethnic minorities do too.

I would like to be able to whistle, and to ride a bicycle without being a danger to myself and others. I want to swim with my face in the water. And be good at cooking Mexican food so that I can have it wherever I live. And have enough money so that I can make my own arts institution. And go to India.

Something to do with music. Or dance. But it’s not really either/or – writing can be done alongside many other things.

At some point it just became something I did, regardless of whatever else I was or wasn’t doing. When I was younger it was clearly a way to say things that I was afraid or unable to or too shy to say. Now it’s more like habit, interest, and an ongoing desire to write.

The Earth Dwellers. In a year with 13 moons.

Book-length translations: poetry by Kawata Ayane, and the Collected Poems of Sagawa Chika. An anthology of 20th c. Japanese poetry, with Eric Selland. A couple of books of my own poetry.