12 or 20 questions: with Andrew Steinmetz 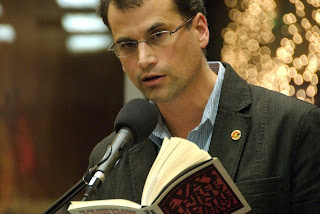 Andrew Steinmetz was born in Montreal in 1965. He pushes a pen, and strums guitar for a living. He is the author of a memoir, Wardlife: The Apprenticeship of a Young Writer as a Hospital Clerk (Vehicule Press, 1999) and two collections of poetry, Histories (Signal Editions, Vehicule Press, 2001), and Hurt Thyself (McGill-Queen’s University Press, 2005). Eva's Threepenny Theatre (Gaspereau Press, 2008) is his first novel. In an unusual fiction about memoir, Steinmetz tells the story of his great-aunt Eva who performed in one of first touring productions of Bertolt Brecht’s masterpiece The Threepenny Opera, in 1928.

Steinmetz has been the fiction editor of Esplanade Books (the fiction imprint at Vehicule Press) since 1992. Over the years, he's worked on the first books of Andrew Hood (Pardon Our Monsters), Liam Durcan (A Short Journey by Car), Jaspreet Singh (Seventeen Tomatoes), Lolette Kuby (Out of Cleveland) and B. Glen Rotchin (The Rent Collector). He lives in Ottawa with his family.

1 - How did your first book change your life? How does your most recent work compare to your previous? How does it feel different?
The response to my first book woke me up. It made me conscious of what I was doing or of how readers interpreted what I was doing. Until then I was underwater. Writing was intuitive and unconscious. I was very self-critical and aware of the words on the page and how I wanted each sentence to be, but beyond that – the marketplace, genres, readers, I had no clue. My last book was difficult to write. It has everything to do with genre. In it I tried my hand at historical fiction, oral story telling, second person narration, first person and third omniscient. The typical sophomore mistake: I tried to do too much, probably. But personally I like books that fail at what try to do because often these books have an innate restlessness about them, the author is taking chances, trying things that probably cannot be done or should not be tried at home, alone.
2 - How did you come to poetry first, as opposed to, say, fiction or non-fiction?

I came to song writing first. For years, I was writing deeply personal and revealing songs (on guitar) about my relationships with girlfriends I never had in the first place, songs that had absolutely nothing to do with me or how I really felt about said non-existent love interests. From music I learned about projecting a persona. I’ve never been satisfied with my poems. On the rare occasion I have been happy with them, readers and critics have not been.

3 - How long does it take to start any particular writing project? Does your writing intitially come quickly, or is it a slow process? Do first drafts appear looking close to their final shape, or does your work come out of copious notes?
I am more of a re-writer than a writer. It comes quickly at first, then not at all, then I delete or erase, and then I re-write changing little along the way. Then I turn it upside down, then inside out. Then I tear it up. Then I water it. I repeat this process for five years or so. No note taking. I’m too impatient for that.
4 - Where does a poem or piece of fiction usually begin for you? Are you an author of short pieces that end up combining into a larger project, or are you working on a "book" from the very beginning?
Wardlife began with the idea of writing very short, accurate-to-transparent portraits of people. Each portrait was meant as a finger exercise or etude. Writing that book was my apprenticeship. I was learning my chops. I never look at the big picture. I get stuck in quicksand and shadows behind each word. All I try to do is finish the sentence I’m working on. What leads me on and gives the whole project some kind of arc or continuity is the sensibility of the piece as a whole. I have aesthetic goals, and structural criteria, which I stomach before I begin. The aesthetic vision drives me forward.
5 - Are public readings part of or counter to your creative process? Are you the sort of writer who enjoys doing readings?

Playing live almost killed me when I was a musician. The alcohol and the anxiety-provoked fasting ruined me for days. But I’ve come a long way. I enjoy reading now. I used to really hate them. Mostly, I disliked the context of literary readings, the preciousness of these events, their artificiality, the emperor’s new cloths aspect of them. These days readings are okay, but author interviews are not my cup of tea. I’m a product of New Criticism. For me the author is dead. Why revive him or her?

6 - Do you have any theoretical concerns behind your writing? What kinds of questions are you trying to answer with your work? What do you even think the current questions are?
The questions are usually aesthetic ones, and architectural. For example, in Eva’s Threepenny Theatre I tried to reconcile Brechtian alienation with an arc of emotional identification. To me that’s what the book is “about”. It is also about genre, which I believe is a current question. I have said I wrote Eva to provoke some ‘genre consciousnesses’. I mean this playfully. But sure, readers need to become aware of literature’s class structure or the caste system that sets fiction apart from non-fiction, and imagination versus opinion and the truth. The book is about the process of writing creative non-fiction. I call it fiction about family memoir. It’s really about the fiction of such a thing as non-fiction family memoir or creative non-fiction.

7 – What do you see the current role of the writer being in larger culture? Does s/he even have one? What do you think the role of the writer should be?
I went to see a reading by Aleksander Hemon, a writer I admire. He was asked the same question at BlueMet in Montreal years ago. He answered that the writer’s only obligation is to his or her sentences. I feel the same way. Now, he also echoed the humanist perspective that writing and reading potentially has transformative power, the power to make us more sensitive and self-aware as human beings. Reading is like exercise. It stretches us as human beings. I have the same old secular humanist beliefs.
As for the role of the writer or his/her place in our culture, I like what my friend the writer Liam Durcan recently told me: Andrew, he said, we’ve become harpsichord makers. Fine craftsmen, maybe. Beautiful instruments made, sometimes. But not too many people are in the market for a harpsichord these days. And a lot of buyers, when they place that harpsichord in the living room, never play it.
8 - Do you find the process of working with an outside editor difficult or essential (or both)?
Well, “internally” - that is, in my head - I already work with about three editors or competing voices of chagrin. These editors are mostly a nuisance. They say awful things about me and about what I write and about why I write. But true external editors: I love them. I can’t stop writing without them. I never finish projects only abandon them. Editors help me do that. I can’t thank Kate Kennedy and Amanda Jernigan enough for all the work they did on Eva’s Threepenny Theatre.
9 - What is the best piece of advice you've heard (not necessarily given to you directly)?
Hold on to the boat.
10 - How easy has it been for you to move between genres (poetry to fiction to creative non-fiction)? What do you see as the appeal?

The more the merrier. Different genres and their respective limitations or ground rules let you be different people, or a different writer.
11 - What kind of writing routine do you tend to keep, or do you even have one? How does a typical day (for you) begin?
Over the years it has changed. Morning is best, or late at night. Right now a typical day begins with one hour of writing early. Then I walk my son or daughter to school, and then I take the dog out for a run. Then I return home and write or read until I think about playing squash. Then I play squash.
12 - When your writing gets stalled, where do you turn or return for (for lack of a better word) inspiration?
Whenever I’m working I put together a small library of books which I think of as prototypes for that particular project. For Eva’s Threepenny Theatre the library was Flaubert’s Parrot (Julian Barnes), The Question of Bruno and Nowhere Man (A. Hemon), Out of Sheer Rage (Geoff Dyer), Living for Brecht (Ruth Berlau), Mephisto (Klaus Mann) and many more. I return to the library when I need inspiration.
13 - What was your most recent Hallowe'en costume?
Salman Rushdie.
14 - David W. McFadden once said that books come from books, but are there any other forms that influence your work, whether nature, music, science or visual art?
I’ve been working on a short story called What Happens To Us for about eight years. That story revolves around the crisp vision of a character I’ve called Alex Pratt. Alex Pratt is one part Christopher Pratt and one part Alex Colville.
15 - What other writers or writings are important for your work, or simply your life outside of your work?
Right now Aleksander Hemon.
16 - What would you like to do that you haven't yet done?
Play attacking midfield for Arsenal FC alongside Arshavin and Fabregas.
17 - If you could pick any other occupation to attempt, what would it be? Or, alternately, what do you think you would have ended up doing had you not been a writer?
Architect.
18 - What made you write, as opposed to doing something else?
When you write you don’t have to open your mouth.
19 - What was the last great book you read? What was the last great film?
The Executioner’s Song by Norman Mailer. Das Leben der Anderen (The Lives of Others) by Florian Henckel von Donnersmarck.
20 - What are you currently working on?

Two projects. A novella called the Great Escape about Michael Paryla, an actor who appeared in the Hollywood movie alongside McQueen and Attenborough et al but never got a credit. He’s a relation of mine. Three years after appearing in the movie he died in Hamburg from an overdose. It’s going to be about acting and writing and escapism. The first parts will be non-fiction; the ending pure fantasy. Again I am working with family history material but trust me the process is not ancestor worship. Rather, I like the idea of taking on a traditional subject and treating it experimentally. I’m redefining Eliot’s essay Tradition and the Individual Talent. Here I am going to sharpen my individual talent against my family tradition, not the literary one.
The second project is a novel called The Song Does Remain The Same about a kid named Virgin Harry who pays a price for hating the band his girlfriend loves. Led Zeppelin.
12 or 20 questions (second series);
Posted by rob mclennan at 8:05 AM
Labels: 12 or 20 questions, Andrew Steinmetz, Gaspereau Press, Vehicule Press