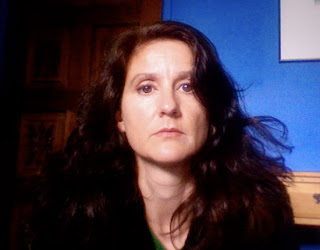 DM Bryan is a Calgary based writer. Her first novel, Gerbil Mother, was published in 2008 by NeWest Press.

Gerbil Mother, my first book, was published only 18 months ago so I’m not writing with a whole lot of perspective here. Maybe describing myself in public as a ‘writer’ is producing some slow, tectonic alteration in my psyche… well, it’s possible.

A failure of imagination, mostly—I just really like novels.

I am slow, slow, slow; I gestate forever. I try to make notes—god, I’m sure I should make notes—but in the end what I write is like a squash court: the black on the page records the places where, over time, I slam the idea ball most often. Obsession is my method… if only it weren’t so hard to spell, all those fucking ‘s’s.

Always, always a book (a novel) from the beginning. I’m discovering that the real kick to writing long fiction is that the novel can end up embodying the process of discovery that results from the act of writing over time—which is probably obvious but is news to me. The idea of a unity of purpose, in which all action serves thematic concerns, suddenly seems less important than a unity of focus over time. In other words, long fiction is long so that it can contain a secret narrative: the one in which the writer changes her mind alongside the book’s events. Long fiction is a record of a deepening of understanding, and the preservation of this process in the final work explains why messy books are most interesting.

At some point in the writing process I do an edit where I read aloud (to myself). I value that connection to the oral and want the words on the page to work as well in their spoken form as they do in their typographic form. With regard to public reading, I write for other people so the chance to read aloud to them is the fulfillment of a fantasy.

Oh hell, I got lots of theories, but theories are for bars.

Okay, it’s dangerously close to a theory but here goes…. Arguably, the novel is a form that has as its genesis a concern with how we choose to live and how we choose to behave. Long fiction is a place to engage in ethical play (which doesn’t rule out other forms of play), and most novelists are moralists of one stripe or another. The role of the novelist is to offer the reader an enticing and serious offer to play along. Which turns out to be plenty hard to do.

To me from a screenwriting instructor: know your guns. That was the moment I knew I would never be a screenwriter.

On days I get to write, you mean? Well, um, I fuck around, procrastinate, daydream, paint my toenails, write only when hysterical… please tell me everyone answers this question the same way.

Hey, s’good word—don’t knock it. When I get stuck I do my regular life: driving kids around, doing dishes, walking the dog. Obviously, we have some other part of our brains that works on problems without the necessary involvement of our conscious self. As long as I define the problems clearly enough, answers usually come on their own. If not, I just write shit and take it out later.

12 - Betty or Veronica or Archie or Reggie? Drive or fly (or sail)? Laptop or desktop?

Veronica on a sailboat and, silly, my laptop has a desktop. Duh.

Yes, yes, yes. O, I like this question. Painting and drawing inform everything I do, from style to content. My training is mostly in the visual arts and from a craft standpoint I know a lot more about making pictures than I do about writing. I’m not sure why I don’t try to work more as a visual artist, but I like to blame it on the English painter and cartoonist, William Hogarth, who hooked me early on the notion of visual narratives. Since then, I’ve been a real peanut butter cup: stories in my pictures and pictures in my stories. I think I choose to write (instead of make movies or comics, for example) because the headspace contains the blankest canvas and the sharpest pen. I don’t have a clue what that means, but it sounds good, doesn’t it?

Well, I would quite like to write a brilliant, insightful, hysterically funny and impeccably elegant book that sells like proverbial hotcakes—but then wouldn’t we all?

Jesus met a man at a roadside stand who was selling hotcakes. A long line of people had formed waiting to buy what the man offered. Jesus joined the line, and when he reached the man he purchased hotcakes for himself and all the disciples, asking, “What’s your secret, O man? Why do your hotcakes sell so well?” “Well,” said the man, “my secret is that I mix a bit of dog shit into every batch.” “That’s some secret,” said Jesus, “I suppose you’ve got some pithy bit of wisdom justifying the inclusion of totally gratuitous shit in a parable about hotcakes?” “No, not really,” said the man, “people just seem to like eating shit.” “That’s not funny,” said Jesus. “No,” said the man, “and it’s not even true.” “I find that a comfort,” said Jesus, and he went away, munching on his hotcake.

Well, I pretty much know what I’d be doing if I hadn’t been a writer because I don’t make enough money as a writer not to do something else as well. So, the answer is a bunch of mcjobs plus some teaching. I don’t really want to do anything else other than write. Sorry… grumpy answer, I know.

Panic. That I’d have to do something else.

Loved the Cohen bros’ No Country for Old Men (haven’t read McCarthy’s), which must be the most truly subversive film of all time. Hated the movie until the last ten minutes (all those fucking guns), and then it completely redeemed itself. So, hang in there.

Second novel… no talking fetuses in this one. Instead, it’s about how the essentialist division between notions of agency and determinism can never be productive. Remember, you heard it here first.