12 or 20 questions: with Kemeny Babineau 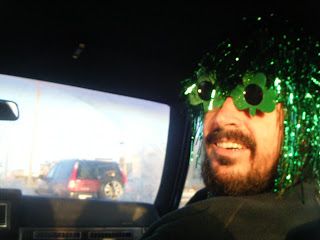 Kemeny Babineau lives outside Brantford Ontario with his wife and two daughters. He edits an independent literary wag called The New Chief Tongue that appears courtesy of Laurel Reed Books. Babineau’s most recent work is After the 6ix O’Clock News published by BookThug.

It became apparent that publication didn’t depend upon others. My recent work is as tentative and hopeful as the first but now I feel I understand better how it is I write my best work.

I think through song lyrics, wanting to emulate that.

I don’t write through projects. I have learned to distrust such intentionality in my work. The original draft often resembles the final product as what one must keep alive in the poem, whether it be long or short, is the initial flush of creativity, the original intent. My work does not come out of copious notes but it does arrive from the persistent study of a subject that interests me.

Poems are made one after another, and often on far ranging themes and ideas. The job of compiling a book is in pulling together similar elements from the seemingly scattered poems. Often a poem can have a companion piece that was written several years before with various other concerns lumped in between.

I value readings because often afterwards you can a hone a piece down to what you felt worked when reading it in front of an audience.

I am not pre-occupied by theory at all. I approach language as a toy but not a frivolous one. For me it’s a question of how far can you bend the language and still engage, or where does the construction of narrative end and for how long can it be strung out, if even upon falsified grounds. And when it does end, narrative, can you still be engaging, entertaining and provocative.

The writer has a diminished role in larger culture but I think the writer will always have the providence of the sage. Writers have many responsibilities, as chronicler, entertainer, prophet, provocateur, bacchant.

Al Purdy said (or something like it) “there aren’t any themes, only one poem after another.”

I don’t consider myself much of a fiction writer, although I have a few short stories to my credit and do work on them from time to time, but in moving from poetry to fiction I find I like to pull fiction into the poetry camp somewhat and make it an exercise in economy.

No routine for writing, I set time aside and use that, often when I’m very busy doing other things, especially manual tasks, that is when a poem will burst upon me.

Charles Olson I find fascinating, but as for opening up the poetic veins I turn to writers like Gerry Gilbert and bill bissett.

Write a book I didn’t write, in other words compile a book of erasure.

20 questions from rob mclennan, and a handful of recent poems.

thanks rob and kemeny. Kemeny is the master of economy and precision, writes like a yogi. Out of the resulting ambiguity, humour.