12 or 20 questions: with Graham Foust 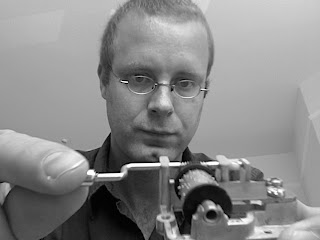 Graham Foust's fourth book, A Mouth in California, will be published by Flood Editions in the fall of 2009. He lives in Oakland, California.

a) I went from being someone who hadn’t published a book to someone who had—it was rather anticlimactic, though I wasn’t really bracing myself for any significant change. It may have contributed to my acquiring a job at a university.
b) My newer work is, for lack of a better word, thicker. I’m using longer lines and less white space.
c) It looks different, I think, but it feels about the same.

I began writing fiction in high school, and I was terrible at it. I had a teacher in college who was teacher enough to tell me the truth. She said I that wrote great sentences, though, and then she asked if I’d ever tried writing poems. I hadn’t, so I did.

a) When I hear the word “project,” I reach for my pillow.
b) Both.
c) Copious notes.

For the answer to the first question, see lines 5 and 6 of John Berryman’s Dream Song 29. I don’t know the answer to the second question. I guess I tend not to think of books when I’m writing poems—once I get a bunch of poems that seem to go together, I assemble them into a book-like stack, at which point I show it to some people in order that they may verify or dispute my sense that the poems fit together in some way.

It’s often helpful to say the poems in front of people and to hear their immediate reactions to them, so it’s part of the process in that sense. I tend to revise a lot when I read, and it’s usually an enjoyable experience for me.

a) I don’t think someone without theoretical concerns would bother to write poems.
b) None. I answer questions in prose.
c) Allen Grossman: “A poem begins and ends in silence. Why not call it nothing?”

I’m generally bored by writers who have “roles.” I think writers should let readers take care of that sort of thing.

In my case, it’s very easy and absolutely essential.

The best advice I’ve heard was to avoid a certain person who shall remain nameless. Unfortunately, the only reason I know that this was excellent advice is because I didn’t take it.

I don’t have a writing routine. A typical day usually begins with my son requesting that I “play bears” with him.

I just do whatever else there is to be done. I don’t find the stalking of inspiration very pleasurable. The ability (and/or the desire) to write poems disappears now and again. As yet, it’s never not returned.

I see what he means, of course, but I go outside every day and walk around without a book in my hands. And I look at paintings and listen to records and read science-related articles in general interest publications. I suspect I’d be foolish to say that these activities didn’t influence me. At the very least, they bored me enough to send me back to whatever book I was reading.

I return most often to the work of Wallace Stevens, Samuel Beckett, and Emily Dickinson.

a) Sushi chef
b) This question contains its own answer: Not writing.

I am a slightly less mediocre writer than I am a musician, painter, or athlete.

I haven’t seen a movie in three years and don’t remember what film I last saw. Now Amy is reminding me that I have in fact seen The Darjeeling Limited (which I hated) and Juno (which I thought was okay). I have been watching The Wire and I think it’s terrific.