Ellie Sawatzky, None of This Belongs to Me

WAYS TO WRITE A POEM

Imagine how you might be murdered, but
make it beautiful.

Think about sex but never do it.

Unlearn how to swim.

Think about which of your friends you’d
have sex with and why.

Say everything you might want to say
to your ex, but you’re a bird.

Sit in a room with some
blank-faced balloons until
you burst.

Don’t drink anything, not even
coffee. Be thirsty.

Imagine you’re in a car full of poets
and the car explodes, but
add magic.

Cut off a single finger.

Touch the white part
of the fire. 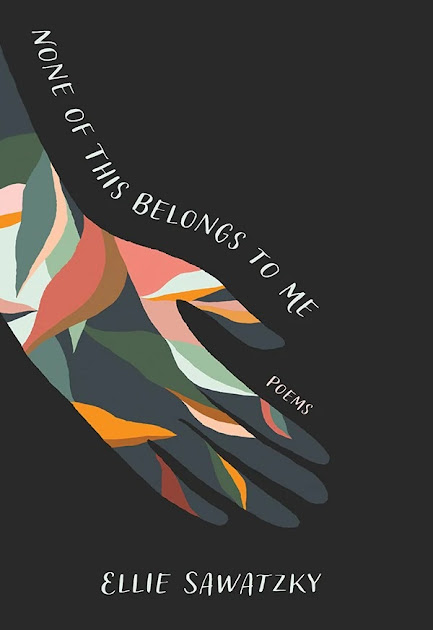 I’m enjoying the lyric narratives in Vancouver poet Ellie Sawatzky’s full-length debut, None of This Belongs to Me (Gibsons BC: Nightwood Editions, 2021), a collection of small studies each articulating different elements of her ongoing attempts to navigate and adapt to the various elements of entering the lived space of adulthood. She writes of her aging parents to the unfolding of expanded expectations, both from without and within. “In the silence now / we’re all adults and no one knows // what’s best.” she writes, towards the end of the poem “RECALCULATING.” Or the poem “COWHIDE, PLASTIC,” that includes: “How did I grow up and arrive // here, of all places, and who are / these people with their cowhide // from Key West, Pomeranian peeing / in the corner on plastic grass. Grown-ups // made me, explained things like sex / and art and garbage.” Sawatzky’s poems are carved portraits of thinking, less meditative than more immediately responsive to and within the moment. From her home base of Vancouver, a city she has been in long enough to have established roots, she writes of her shifting relationship to her hometown of Kenora, Ontario, the introduction of two points requiring her to seek a new sense of grounding between them. “My mother’s // voice in the smooth tunnel / of the telephone. She’s alone // in the loft with her nine-patch / and oldies channel. Hopeful // quilts on every wall,” she writes, to end the poem “I PRESS AN EAR TO ONTARIO,” “and Lassie / bounding black and white // across the Scottish Highlands.”

There is something of this collection that really does seem engaged with seeking out the correct questions with which to properly move forward. Writing also on imaginary boyfriends, health and travel, she writes from that nebulous space of having arrived in adulthood, and the loose threads of her prior self that remain. She seeks a sense of grounding, one might suggest, before any further steps are possible, not wishing to untether from any sense of her history, community or family. Composing lyric meditations akin to the work of poets such as Stephanie Bolster or Karen Solie, Sawatzky’s poems display a polished craft that confidently articulate uncertainty, searching for what might not yet connect, but through which can’t help but reveal. “is freedom the opposite of anxiety?” she asks, in the first section of the five-part “IF YOU’RE WRITING THIS DOWN,” “what’s the opposite of stone?” She seeks to connect, and to hold. Later on, in the same poem, asking: “what’s the opposite of island?”