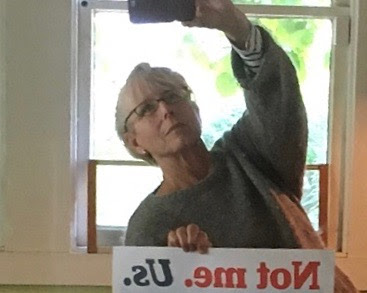 Jean Day is a poet and editor. Her most recent book is Late Human (UDP, 2021). She lives in Berkeley, where she has just retired from several decades as managing editor of Representations and continues to do advocacy work for members of the University Professional and Technical Employees Union.

The first book (Linear C, a chapbook) offered the great pleasure of being taken somewhat seriously by some of the writers I cared about.

I’d like to say that recent work is freer from what I thought the terms of rigor were in 1980; it’s certainly much less concerned with the notion of an avant-garde. While newer poems seem to me more considered, they aren’t, I hope, more conservative. Thematically, I think my touchstones have remained pretty consistent: who has the power to say what they say, and why is it so revealing—and often funny/tragic?

I’ve always been interested in multivalent, cryptic, difficult, and eccentric meaning systems, which, with some obvious exceptions, seem much more prevalent in poetry than in prose.

It varies. Sometimes an almost fully formed idea strikes me (I want to write a book of odes; I want to wring every last change on my own name); sometimes I write and write until I perceive a thread. Often individual works or series come out of my notebooks, although “copious notes” is much too ponderous to describe what’s in them (all sorts of detritus). The specific content—words—of a first draft often change, but the sound of it is generally what gives it an initial shape, a framework from which to move forward, and I usually stick with that.

I think I just answered that; it happens both ways.

I do enjoy readings, but not because I make any claims for a performative element in the work; I just think my own voice is probably the best way to hear the poems, or for me to hear the poems. I love hearing people laugh, and I love socializing afterward.

It would be silly to say I don’t have theoretical concerns when I’m writing; I’m just never clear (and actually somewhat uninterested in) what they are, or if they’re coherent. I don’t think I’m trying to answer any particular or persistent questions except the most basic ones that any human confronts: who am I, what am I, who are you, and why? Why is there suffering and what can I do about it? How am I going to deal with death? And so on. I don’t think of my writing as solving these or any other problems, much as I would be happy if it did. For the most part, I think, it’s unscripted, or unforetold—just part of the ongoing human story. I think we all know what the current questions are, at least on the planetary, political, and social scales, and I think all but the very tone-deaf among us are writing toward those questions in one way or another—some straight, some slant.

I’d like to think “the writer” can be an agitator, a thorn—but I’m not sure “the larger culture” recognizes her (or the poet, at least) as having even that much power, or any legitimate role. We’re just people doing our jobs.

To the extent that I’ve experienced a real “outside” editor (one who asks important questions about the work), the interaction has been so rewarding. Having to justify one’s choices can be fruitful—even salvific.

“Never take no cutoffs, and hurry along as fast as you can.” –Virginia Reed, of the Donner Party. Hers was advice given to the emigrants who might follow her. This may be anti-advice in the realm of poetry, but it cuts to the quick.

Translation of poetry is on a continuum with writing it, even if, in a sense, it’s also unwriting (taking things apart). Having “translated” only a small number of poems, with only the most rudimentary knowledge of the language of the original (Russian), I can have little to add to what real translators think and do. Even the occasion of my first involvement with translation was a bit of happenstance: In 1989, Lyn Hejinian and Arkadii Dragomoshchenko paired five American poets, of whom I was one, with five Russian poets for a sort of experiment in translation. This was during Perestroika, so before the fall of the USSR, and the enthusiasm for communication across what was left of the iron curtain was high. The idea was to do it transpersonally, not just transtextually. So the ten of us met in Stockholm and Helsinki, and then Leningrad, to talk face to face and, with that dialogue as a kind of substrate, to read and translate each other’s work. “Translation,” on these terms, involved a great deal of talking, eating, drinking, smoking, reading, walking around, guessing, second guessing—being—all activities (except smoking) that figure into my own process.

Sadly, unlike HD, Proust, and some others, I’ve never had the leisure to write from bed. Daytime (while working a full-time job) seems to have required all my practical faculties, so I’ve tended to write, when possible, for an hour or so before or after dinner and here and there on weekends. Reading, which has always been a big part of my practice, I can do any time a few minutes make themselves available.

Almost any change of direction will do: carving wood, drawing, talking to neighbors (or friends or strangers)—even willful nonendeavor sometimes helps, but I’m usually too goal-oriented for that.

All of the above. Definitely every instance of culture I consume, plus human conversation—the sound of people talking—really anything that crosses my perceptual bow. Lately I’ve been interested in what John Rapko calls “proto-art”—what you might think of as “found” objects in nature (or culture), naïve works, things that were once thought “primitive” or were at one time thought important, now not. The attraction is the lack of finish or determined meaning—the fact that meaning can occur unintentionally or quasi-intentionally. That there can be an unadulterated, unfiltered perceptual reward in something that didn’t mean to be art. Perhaps a weird thing for someone who makes art to say.

Things come and go. (And so many! Any list I could give would necessarily be hopelessly partial. For my own work, at one time or another:

Some of the classic works of anthropology, especially Malinowski

Research on the development of language and early childhood

The literatures of enthusiasm, hot-headedness--religious and otherwise

Early American journals and narratives from all sides of “contact”

The anonymous 18thC British work Low Life, or, How the Other Half …

Amanda Goldstein’s Sweet Science, which turned me on to Shelley’s “Triumph of Life”

Old science; plus naturalists, scientists, and observers of any era; field guides

Outsiders in any genre

T.J. Clark’s The Sight of Death

Poets and poetries too numerous to mention

Being a writer has never been an income source, nor has it ever taken up the majority of my time, so in that sense it’s never been an “occupation.” The only trajectories I considered even half seriously before understanding that writing would be the main thing were ballet (a dream dead by the time I got glasses in 6th grade) and visual art. For a brief time, when I first moved to SF, I thought learning how to print, either letterpress or offset, might lead to some career options, but the former was absolutely nonremunerative, and the latter, I realized, would have bored me as a real job. So I drifted into small-press bookselling (SPD) and then academic editing. In hindsight, fieldwork in botany sounds … romantic. But I’m not very good with detail.

At a summer camp for teens in the arts, where I was doing mainly drawing, I saw that it was the “writers” who were having verbal thoughts and articulating them. I’m not sure why, but that seemed far more interesting to me than what the art people were doing, so I switched.

Olga Togarczyk’s House of Day, House of Night, is a wonderful novel; I read all of her novels in English during the lockdown. They’re all great in different ways, but House of Day… has a miraculously quiet touch while getting to the core of something—lived life? Mushrooms? The only “great” movies I’ve seen at all recently are some of the filmic works of the South African artist William Kentridge, shown online through his gallery in 2020. The collaborative film by Abbas Kiarostami and Victor Erice, Correspondences (ten filmed “letters” between the two filmmakers), made in 2016 but seen in the last year, also made a big impression.

Finding a publisher for The Night Before the Day on Which, a 3-part project finished more than a year ago. It’s hard to talk about work that’s actually in progress (not finished), but I can say that I’m still dithering around with another multi-part project whose overall, but very provisional (because entirely unoriginal) title is The Elements. So far, it’s “about” foundations, morphologies, ur-circumstances, branching structures, seaweed. The first section, “Adamant” (also provisional), is finished, but the sheltering in place threw my psychic and work lives, my schedule, my brain function for a loop … so, however I go forward, I will have to deal with that break somehow.