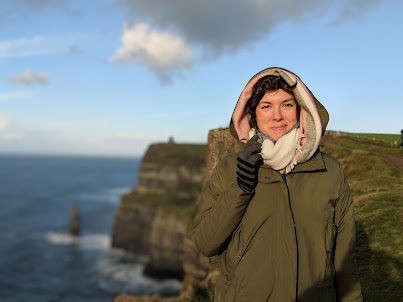 Kimberly Quiogue Andrews is a poet and literary critic. She is the author of A Brief History of Fruit, winner of the Akron Prize for Poetry from the University of Akron Press, and BETWEEN, winner of the New Women’s Voices Chapbook Prize from Finishing Line Press. Her recent work in various genres appears in Poetry Northwest, Redivider, Denver Quarterly, the Los Angeles Review of Books, and elsewhere. She teaches creative writing and American literature at the University of Ottawa, and you can find her on Twitter at @kqandrews.

My first full-length book came out at the very beginning of the pandemic, so I guess I wish it had changed my life more than it did. But that's not being generous enough -- having my first book out in the world has opened all sorts of doors for me, from readings to whole jobs. It's irritating, on a systemic level, that a printed collection is required to open such doors. But on a more personal level, it is exceedingly gratifying to see those years and years of work coalesce into an object that you can hold in your hands, that other people can hold in theirs and have on their shelves. Unlike individually published poems, a whole book has the time to make a series of arguments that are, to use the old cliché, greater than the sum of their parts. My first book taught me that, to a degree; my more recent work really takes it to ridiculous extremes. What I'm writing now feels both much more experimental (formally) and much more rhetorically coherent; if my first book seems like it's aiming for a kind of formal range or virtuosity, my new work is just like these huge weird blocky or spindly bits of texts that are all hammering home a big, almost academic-critical point.

This is probably a common answer, but: I cannot write plots. I've never been any good at telling stories; my imagination also seems incapable of the gymnastics required to actually make up a whole character. The first poem I ever wrote was in early high school, in response to a friend's sudden and devastating illness. I was trying to capture a kind of social shock, and it seemed to me at the time like a compressed, singular thing, like a bright light shining in your face. I suppose that's why it came out as a poem and not as a narrative. I've been stuck with the genre ever since.

I'm in the fortunate position of having several ideas going right now; starting creative projects has always come relatively easily to me (starting scholarly ones, on the other hand, I find nearly impossible). I don't do a huge number of drafts of a given poem; I do, however, take a lot of notes. I tend to write a lot of single drafts of different poems and then discard whole drafts and start over; I tell my students that I'm a notorious "blank-page" reviser.

I'm definitely a "book" poet, though I suppose that always starts by being a bit of a "theme" poet, by which I mean I'll get stuck on a thing that I want to write about, and then write like ten poems about that thing, and sometimes that stops shortly thereafter (hence, for example, my chapbook BETWEEN) and sometimes it turns out to have legs. I wish, at times, that I could be one of those poets whose books are simply a series of only loosely connected poems. I'm not really sure if books like that exist anymore, so great is the impetus towards "project" books.

I adore doing readings. Adore it! If you are reading this, email me and ask me to read for your class/book club/friend group/rowing association! I'm not sure if I'd say they're a part of my "creative process," but I find them energizing and fun and an integral part of being a writer.

For better or for worse, the writing I'm doing now is 100% theoretical concern. My current project grapples with the question of how our lives might be different if we allowed sadness and slowness to be a part of them; it takes an explicitly anti-capitalist (which is to say, anti-productivity, anti-speed, anti-consumable-happiness) stance. The real current question, though--not for me, but for everyone--is climate change. It's not something I'm currently writing about in a concerted way, though of course one cannot write about degrowth without also sort of writing about climate change. My next project is about steel manufacturing, though (see, I told you I'm a horrible "theme" poet) so it will be interesting to see how it comes up when I can finally get to that book.

There are lots of different types of writers, and correspondingly different types of roles for them. For poets and scholars, though, there's a type of demonstrated non-instrumentality to our work that is I think (a) increasingly vanishing and/but (b) increasingly important to safeguard. Lots of people want to be artists because there's some idea of "freedom" in there. Is that ideological? Probably. But is there also some truth to the idea that it's hard to alienate the work of a poet or a painter. When you do, you get slogan-writing and graphic design, which are not the same things, though of course they can be very good careers. The role of the writer, then, is maybe just to demonstrate that we should abolish all careers. A strange thing about me is that I am very pro-professionalism and very anti-career. I do think they're separate.

I've not worked with that many outside editors, but my experiences have been good. My poetry editor, Mary Biddinger, is a marvel. She will provide exactly the amount of help you need on a given thing. Usually the process of publishing poetry is a pretty hands-off affair.

Learn to recognize the people around you whose actions are dictated by opportunism or other kinds of jobbery, and then proceed to avoid them to the fullest extent to which that is possible.

I, like most people I suspect, am in constant search for the perfect routine. Right now, I'm finishing a scholarly project, and I write prose best in the afternoons. So mornings are devoted to walking and administrative procrastinating, and then I'll (hopefully) settle into writing after lunch. For poetry, it's the opposite -- I write it best in the mornings, so I'm going to have to change things up when I get back to it.

Reading in the general vicinity of what I might want to be writing about. Every time, no exceptions. Not just poetry, though that's a lot of it. The reason I have a current book project is because I found a PDF of Saturn and Melancholy on the internet and was so smitten with it I decided to write an entire book basically in response to it. That's it!

I feel like my mom used to have a small bottle of White Diamonds lying around, and I'd bet almost anything that if I smelled that perfume again I'd be walloped right back to the suburbs of eastern PA. My other, adopted, home is central Maine, which smells unavoidably of pine.

All of those things influence my work, which sounds like a non-answer, but when your guiding philosophy is that poetry is just particularly intense noticing, it kind of doesn't matter what the focus of the noticing is. It can all become fodder.

The classic answer: too many to name! John Ashbery's work gave me my start, in a real sense, even though that "start" was at the very end of my MFA. W.G. Sebald keeps me going. Dionne Brand is constantly teaching me how to think. John Keene is not only one of the world's most remarkable writers, but also one of the world's most generous and thoughtful people. I go to Brigit Pegeen Kelly when I want to be astonished. And to Brian Lennon when I want to remember what's important. There's no end to this list, really.

This was always kind of it for me, I think, though had my knees held up I probably could have been a ski instructor forever.

Being really shit at both team sports and acting?

I just read Rebecca Makkai's The Great Believers and it's just as devastating as everyone says it is. Last great film would definitely be Face/Off. I hadn't seen it until this past summer! It belongs in the Louvre.

See question 6, though I'm also trying desperately to finish up a scholarly book called The Academic Avant-Garde that should be out with Johns Hopkins University Press late next year. Catherine, if you're reading this: I'm working on it!

Posted by rob mclennan at 8:31 AM
Labels: 12 or 20 questions, Kimberly Quiogue Andrews, University of Akron Press