Bianca Stone, What is Otherwise Infinite

Of my unclear and unimaginable self
I want none of it. There is nothing
higher than I. Only monks at my feet kissing warts.
I have nothing to give but tears, of which one
is too much and a whole sea
not enough. Do not fathom me here.
Do not touch this. Having laid the cosmic egg
who will take my eternal life in their hands?
It is said this planet came to be
when I was pulled apart. 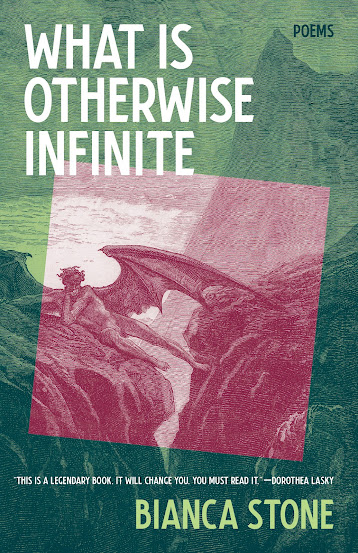 It has been some time since I’ve seen a book by Vermont poet Bianca Stone, since her full-length debut, Someone Else’s Wedding Vows (Octopus Books and Tin House, 2014) [see my review of such here], having clearly missed out on Poetry Comics from the Book of Hours (Pleiades Press, 2016) and The Möbius Strip Club of Grief (Portland OR: Tin House, 2018), so I was curious to see her latest collection, What is Otherwise Infinite (Tin House, 2022). In sharp, first-person narratives working around (as the front flap of the collection offers) “how we find our place in the world through themes of philosophy, religion, environment, myth, and psychology,” Stone composes poems as threads connecting accumulating points; her narratives stretched as sequences of stunning lines and connective tissue. “Time does not go beyond its maiden name.” she writes, as part of “Does Life Exist Independent of Its Form?,” ending the stanza with the offering: “how uncomfortable we are with happiness.” I remember, years ago, Ottawa poet, publisher and archivist jwcurry describing the long poems of northern British Columbia poet Barry McKinnon: how every poem worked its way toward, and then away from, a singular, central point. In comparison, Stone isn’t writing with such length, nor with a single point, but up and away from multiple points-in-succession. It is as though she is composing poems as a series of communiques across telephone wires, connecting pole to further pole to build each poem’s thesis. Through What is Otherwise Infinite, the dense lyric structures of her debut have become far more complex, extended and philosophical; there is a further depth of attention here, one that could only be achieved through experience, as the second half of the poem “I’ll Tell You” reads:

my sister tells me things
that frighten me
what I mean is
how did we get here
made of gingerbread in the oven
eaten by the mother
eaten by the wolf
my little pale nephew standing on the porch
explaining lava in the netherworld
that if you fall in a certain hole
in his game
you keep falling forever
and you don’t get to keep
any of the things
you made.

There is something curious in the way Stone attends to the “infinite,” writing around and through Biblical stories and texts, illuminated manuscripts and other religious depictions, considerations and conversations. “Human nature is bifolios,” she offers, as part of the poem “Illuminations,” “versos, even blank pages / with preparatory rulings for the scribes, never painted upon. / Little books of suffering saints and resurrections. / That’s what we are.” A few lines further, offering: “On this sheet / the Evangelist dips a pen into an inkpot / and rests an arm on the side of a chair, / inspired, like Luke, by the dove, / preparing to set down an account of a life / on paper made from the skin of sheep.” There is a wit to these poems, as Stone offers both guidance and clarity through lived experience and wisdoms hard-won, articulating her takes on depictions of the spiritual from sources high and low. She writes from a world that includes faith, medieval texts and trips to Walmart, and both a sense of ongoing intellectual and spiritual pilgrimage alongside flailing, falling and being nearly overwhelmed. “A serious drama in a cosmic joke. / Scarred,” she writes, as part of the poem “The Way Things Were Until Now,” “masked, dangerous. / And what of the new Eucharist? / How hungry I always am. How I long to lack. / Though in Walmart / my heart beats a little faster. / I want the world to heal up.” Here, Stone becomes the pilgrim, and the composition of these poems-as-pure-thinking are, in effect, as much the act of pilgrimage as they are the articulation of that same journey. “I don’t know. What is it to be seen?” she writes, as part of “Artichokes,” “I can forget / it’s language I long for. Man and his ciphers / cannot save me.” This truly is a stunning collection, as Stone offers her narrator a chaos equally physical and metaphysical that requires balance, one that can only be achieved through a constant, endless and attentive search.