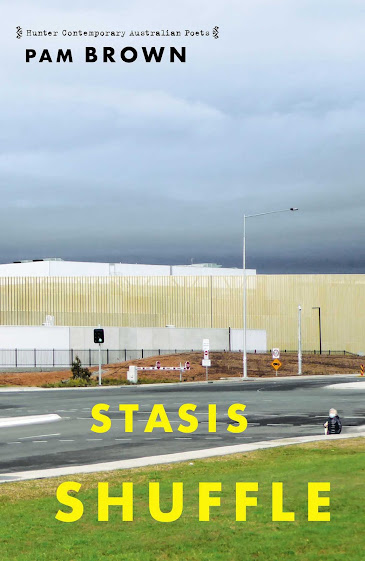 The latest from Sydney, Australian poet and editor Pam Brown is the pandemic response poems of Stasis Shuffle (St. Lucia, Queensland: Hunter Publishers, 2021), her second book to appear last year, after Endings & Spacings (Sydney Australia: Never-Never Books, 2021) [see my review of such here]. Stasis Shuffle is a book directly responding to the restlessness of uncertainty, health measures and remaining in place. In this way, Stasis Shuffle adds to a growing list of pandemic-response poetry projects, a list that already includes Lillian Nećakov’s il virus (Vancouver BC: Anvil Press, 2021) [see my review of such here] and Lisa Samuels’ Breach (Norwich England: Boiler House Press, 2021) [see my review of such here]. Brown’s poems appear to be composed in the quick-sketch form of the poetic journal, attempting to capture, through the long form of the book-length poem, a particular period of time from her home in Sydney; composed in an accretion of short lines, phrases and quick turns, in a kind of perpetual ongoingness, akin to a lengthier structure of what might be called “Creeleyesque,” after the late American poet Robert Creeley. “the / it’s-interesting / bla-bla,” she writes, near the beginning of the collection, “question is – // is your slowly accreting poem / morphing into a larger cloud yet – // a major poem / ghosting in to sydney / past the heads, / making its way to ashfield // darker & darker / birds swirling around in it – / leaves / rubbish & debris / full of menace & meaning?”

She writes of memory and nostalgia, situating herself and her thinking through an assemblage of playful breaths and breaks, collage and accumulation, phrases and visuals. While the poems here offer an ongoingness, they also provide a sense of a gathering of fragments collected over an extended period, something reminiscent of American poet and translator Joshua Beckman’s Animal Days (Seattle WA/New York NY: Wave Books, 2021) [see my review of such here]. Her poems accumulate, offering a portrait of a space, of a time; and a texture across a singular lyric.

I’ve never even been to michigan