Sometimes the visionary epiphany is a simple one: wind.

When to call & when not to call. Against absence we measure our absence. Like a sudden seizing, cold air rushes the highrise, seals some doors at its random whim, building’s breath, slapping hatches open & closed like gills. Even that blind god, the elevator, pauses, hovers mid-shaft under gustheavy force, a force present though unseen.

In my dream we ate ashes. Where are you? Your voice on the phone but the sidewalk charges ahead. The wail in the trees.

Your voice on the phone and in broken glass my image reflected, broken, a piece of neck, a partial ear, a snagged snakelike earphone wire.

O my love, what have we made of what we made. 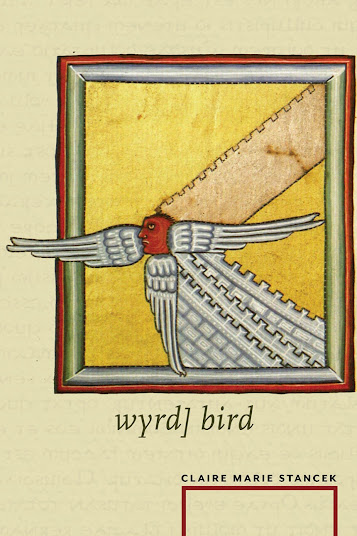 Still working through my stack of Omnidawn titles from the past two years, I’m just now getting to the third full-length collection from Canadian-born American poet and editor Claire Marie Stancek, her wyrd] bird (Oakland CA: Omnidawn Publishing, 2020). Originally from outside Toronto, Ontario, Stancek lives in Berkeley, California, and is the author of the collections Mouths (Noemi Press, 2017) and Oil Spell (Omnidawn, 2018), co-editor (with Daniel Benjamin) of Active Aesthetics: An Anthology of Contemporary Australian Poetry (Tuumba Press/Giramondo 2016), and, with Lyn Hejinian and Jane Gregory, is the co-founder and co-editor of the chapbook press Nion Editions. Deceptively offering a table of contents that is, one quickly realizes, a sequence of first lines, wyrd] bird sits as a collection of untitled, self-contained accumulations that form a book-length suite, akin to a lyric essay, echoing works by poets such as American poets Cole Swensen and Pattie McCarthy, or Ontario poet Phil Hall. There is a way in which she utilizes the lyric mode and lyric sentence as a space for critical exploration, writing through and around Hildegard of Bingen (c. 1098 – 1179), “also known as Saint Hildegard and the Sibyl of the Rhine, [who] was a German Benedictine abbess and polymath active as a writer, composer, philosopher, mystic, visionary, and as a medical writer and practitioner during the High Middle Ages. She is one of the best-known composers of sacred monophony, as well as the most recorded in modern history. She has been considered by many in Europe to be the founder of scientific natural history in Germany.” (Wikipedia). wyrd] bird is a meditation on attending and attention, one that includes prayer, visions and nature, utilizing Hildegard of Bingen as a kind of jumping-off point into further inquiry through an extended period of grief.

Coleridge, bewildered by his baby’s cries, rushed the infant Hartley out into nightingale night, to where the moon calmed the child, as it had calmed Coleridge himself in another poem, like friendship, and friendship’s strength, imparting an abstracted absorption from which, childlike, he rose, and found himself in prayer.

O green vigor of the night air, dense with heavenly bodies made of cold and light.

This really is a stunning collection, one that works a unique complexity and depth through such dark, amid the searching, stretching and attending. In an interview conducted by Valentine Conaty, posted on November 10, 2021 at Full Stop, Stancek speaks of some of the prompt of the poems that made up the collection, and of writing through Hildegard of Bingen’s visions: “The experience of embodiment is central to wyrd] bird not just in what the book describes but also in how it speaks and thinks. I wrote this book during a time of intense personal suffering, when my individual experience seemed inextricable from larger societal violences. And I kept a notebook during this time, carried it everywhere, and even slept with it (the book begins, ‘I slept with my book open, woke into strange thoughts pen in hand’).” Stancek continues:

My pain took the form of receptivity and I wrote the overlapping thoughts, synaptic conjunctions, coincidences and convergences that felt in my heart and lungs, in my body-as-brain. The body’s intelligence is not less than that of the mind, but is immersive, multivalent, and often exceeds the possibilities of language. And notebook writing lends itself to the fleeting and the temporary, the unfinished.