Hope is a thing with a name, and
I am a personality calculator.

I hunted for you in Internet lists.
This stranger sea—each route

too wayward by edge and vowel.
A name is a settled home

me call you. Nothing. Mix in salt,
melody, and ventilate. Voilà

elegy for an exact flaw, for self-
knowing. We are only here for a

short time. You have ten fingers and
ten toes, I have a black-and-white.

In it, your head is cast down from
view, your face obscured.

American poet Jessica Q. Stark’s full-length debut is Savage Pageant (Birds LLC, 2020), a book that includes incredible sharpness, quick turns and powerful images, such as this, the last few lines of one of the opening poems, “Savage Pageant: A Genealogy,” that reads:

My grandmother had eleven pregnancies and
an infection.

My mother had four and wished for boys.

Sometimes you can’t put all the bones
back where they’re supposed to go. 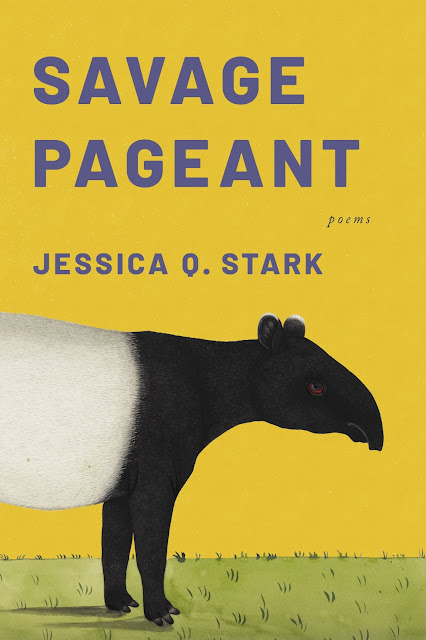 Savage Pageant writes on pregnancy and the body, connecting both to family, genealogy and very real and physical elements of differences the body experiences, from within as well as reactions to those changes. Hers is a book marking shifts, articulating changes large and small, and providing a context far larger and far more visceral than I’ve seen before. Constructed with an “Explanatory Note” and a “Prologue” (which is made up of the above poem), Savage Pageant is structured in four sections and three single or two-poem intermissions—“Act I The Soil,” “Intermission,” “Act II The Ghosts,” “Intermission,” “Act III The Animals,” “Intermission” and “Act IV The Illness”—with a single-poem “Epilogue” to close. I quite like how the dense language of Stark’s poems twist and gyrate, punch and swagger, managing to speak of pregnancy and parenting and the body in new and unexpected ways, from the fragmentary elusive to the incredibly direct, as she writes as the second of the trio of stanzas of one of the poems in the second “Intermission,” “A. Know Your Symptom: 17 weeks”: “contempt from strangers, faster heartbeat, / decreased libido, high blood pressure, breast / and nipple changes, noticeable weight gain, / low back ache, breast tenderness, leg swelling, / flatulence, heightened allergies, leakage of urine, / shortness of breath, leg cramps, headaches, / sensitivity of olfactory senses, increased libido, / constipation, diarrhea, vaginal discharge, / mild uterine cramping, stuffy nose, [.]” This is a remarkable book, and one that rewards further with multiple readings. As she responded as part of the “JESSICA Q STARK IN CONVERSATION WITH VI KHI NAO,” posted at Entropy in February, 2020:

The title came to me after studying the complicated history of pageantry and feminism. I wanted to examine the tension around historical storytelling as a form of pageantry in reducing complicated facts for public display and easier consumption. Stories about street signs, ourselves, our nation. Stories about pregnancy and birth. In contrast to presenting history as linear and uncomplicated, Savage Pageant emphasizes unruliness, fugitivity, and wildness that are never fully contained in a still image or a linear narrative. “Savage” also, of course, refers to the earliest accounts of “otherness” by European explorers, in an effort to contain, subjugate, and excuse their own fearful misunderstandings of “new worlds.” In my mind, Savage Pageant is also a good way to describe the history of the United States and its symptomatic citizens—from the micro-narrative to macro-histories of place and violence; its real “savageness” lies in the elaborate forms of pageantry that (attempt to) manipulate or destroy evidence of violence, racism, ecological mistakes, and national shame. I also want to point to “page” in the word “pageant.” The writing in this book, or any for that matter, inevitably enacts its own forms of unintentional violence and reductions of history and hopefully, a simultaneous break in the tide of rote timeline. I am both a spectator and of course, a deep form of spectacle. Aren’t all poets? I do not miss New York.