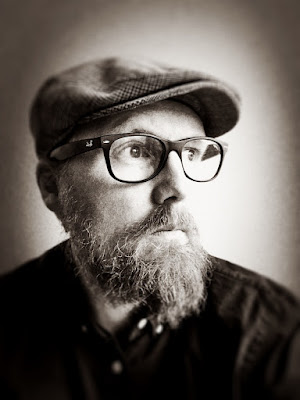 Adam Stutz is the the co-curator of the Non-Standard Lit Reading Series with Mark Wallace and Jeanine Webb. He is the author of the chapbook Transcript (Cooper Dillon Books, 2017) and The Scales (White Stag Publishing, 2018). He currently resides in San Diego, CA.

When my chapbook Transcript came out I was floored. Through the generosity of my friend and editor, Adam Deutsch of Cooper Dillon Books, I finally possessed this beautiful, physical object in my hands and it contained my words and my name was attached to it. I had been struggling with the poems in that manuscript for a few years and the fact that I was able to bring the manuscript to fruition, and that someone other than myself thought it was worthwhile enough to publish, was an amazing feeling. I was just as surprised and delighted when The Scales was selected by White Stag Publishing for their first book competition, and I was again overcome with gratitude that someone, other than myself, felt that there was enough value in my writing to publish it. Granted, this initial sense of joy gave way to an immediate feeling of anxiety because I now had these living, breathing organisms out in the world, which remain vulnerable and exposed, although Transcript and The Scales, deal with various states of anxiety in different contexts, so it's only fitting that I experienced apprehension after each release. Still, I'm incredibly grateful and fortunate to have the opportunity to publish my work, which wouldn't have been possible without Mr. Deutsch and Courtney Leigh Jameson and KT Gutting at White Stag Publishing.

I came to poetry via The Simpsons, specifically the first "Treehouse of Horror" episode in which "The Raven" was read. I was enthralled by the intensity and musicality of the language. It was the first experience I had where I recognized that there was a particular energy present for me in poetry that I didn't find in prose. "The Raven" began a deep and abiding love for poetry which remains unabated.

I'm always reluctant to trust the first draft of a poem. Typically, my writing begins as a morass of entries in a notebook, which I go back and mine months later. When I get around to drafting the poem, it isn't entirely clear what the intention of the poem is, but through the process of cutting and reassembling the notes, the assemblage slowly starts to pull back the curtain, and I begin to find a few threads that start to form the basis for what will eventually become the poem. This process may take a few weeks or a few months, and hopefully, through the process of revision, the poem will continue to reveal itself until and a theme will emerge, and I feel comfortable enough to stop.

For me, the poem begins with a non-sequitur, an absurd observation, or an off-kilter phrase. Oftentimes, an overarching theme won't be present in a group of poems until much later when I'm in the process of arranging the work into a manuscript. Most of my poems tend to be on the shorter side, although the first section of The Scales, "The Happy Vertigo", is a longer poem that spreads out over twenty-three pages, and is the longest piece in the book, although it still retains characteristics of the shorter, aphoristic poems in the collection; poems I like to think of as broken lyrics.

Although they are nerve-racking, I enjoy public readings. I like the opportunity to lend my own inflection and interpretation to my writing so I can share my intentions with a wider audience. Ultimately, I hope that reading my work will start a dialogue between myself and the audience, and the audience will choose to go back and engage with the work again, which may open the possibility for new interpretations.

Transcript and The Scales both interrogate struggles with anxiety, albeit in different contexts. Transcript explores anxiety around domesticity, isolation, and the loss of community, while The Scales is geared towards interiority and trying to navigate the distorted narratives we sell ourselves. For better or worse, anxiety is an important part of my own experience, especially the tendency to distort everything through the lens of feeling like an impostor. My hope is that my writing doesn't come off as self-absorbed, but rather someone reading the work will find value in the shared experience of navigating anxiety, and it may help them to explore and understand how their own struggles may distort their internal narratives and perceptions of the world around them. As for future work, I'm not sure what new concerns, themes, or questions will emerge, but I look forward to finding out.

Given the current political environment we live in, I think writers are more essential than ever to the culture at large. I believe that writers are important conduits for engaging with the thorny issues that culture is wrestling with and shining a light on the dark corners of our collective mind so that we can continue to engage with, question, break down, reassemble, and reinterpret, social, economic, and psychological power structures in our society.

I find it essential! A good editor is an invaluable ally, and I'm grateful for the input and guidance from Adam Deutsch at Cooper Dillon, and Courtney Leigh Jameson and KT Gutting at White Stag, as well as the voices of Vi Khi Nao, Adam Bishop, James Meetze, and Sandra Doller, all of whom provided important feedback on The Scales while it was being revised. I believe it is vital to have objective voices who are removed from the writing to provide me with honest feedback and to let me know what is and isn't working.

For living: "Take a deep breath." - Judith A. Stutz

I try to write for at least 15-20 minutes per day during the work week and a few hours on the weekends. I also try to read a collection of poems and excerpts from journals during the week in order to pull myself out of the echo chamber of my own head. I currently work a ten-hour job as a consultant and it can bleed over into my evenings, which is challenging because it takes time and energy away from writing. Regardless, I try to put pen to paper at least once a day before I go to sleep.

I always return to the work of more talented poets. I reach for books that ignite that inexplicable feeling in me that borders on joy, ecstasy, and melancholy to revive me and to restart my momentum.

Sea salt. It reminds me of the ocean at night.

Jazz and film have always had an outsize influence on my work. John Coltrane's music possesses a mystical, other-worldly quality that defies explanation. I'm also an avid fan of the work of Francois Truffaut, Aki Kaurismäki, Yasujirō Ozu, and Agnes Varda. The visual qualities and the stories in their films deliver the same feeling I get when I'm reading the work of a poet I really love.

Where to begin? There are far too many writers I could name, but the few that come to mind include: Robin Blaser; James Baldwin; Wong May; Hilda Morley; Charles Olson; Robert Creeley; Amiri Baraka; and, Jack Spicer, to name a few.

I would like to read my work for an audience while riding a reindeer on an Icelandic fjord in the middle of summer at midnight. Short of that, I would love to organize a reading at Charlie Byrne's Bookshop in Galway, Ireland.

I've often said that if I had not found poetry, I would have pursued forensic psychology. Human behavior, especially pathological behavior is fascinating to me; however, I have serious misgivings about the justice system in the United States, so I'm grateful to have found poetry instead.

The opportunity to disassemble and reassemble language; the space to interrogate my own intentions, emotions, and states of being; and, the possibility of connecting with strangers on a liminal level.

There is a laundry list of amazing books out there that I have read recently, but a few books that have moved me lately have been Playing Monster :: Seiche by Diana Arterian (1913 Press); small siren by Alexandra Mattraw (The Cultural Society); as a flock of goats by Liana Quill (Groundhog Poetry Press); Carry On: Elegies by Adam Deutsch (Glovebox Poems); Icon by F. Douglas Brown (CCM); Cape Verdean Blues by Shauna Barbosa (Pitt Poetry Series); and, Thief in the Interior by Phillip B. Williams (Alice James Books).

As for film, Black Girl by Ousmane Sembène. I had never seen it before and I was floored by it. It's devastating. Also, a small indie film called Columbus with John Cho.

Right now, I'm trying to disseminate The Scales to as many people as possible in the hopes that it may inspire a review or facilitate a reading; continuing to work on polishing up two more manuscripts to send out for consideration; writing when I can; and, working with my co-curators, Mark Wallace and Jeanine Webb, on organizing the fall season for Non-Standard Lit, our reading series in San Diego.