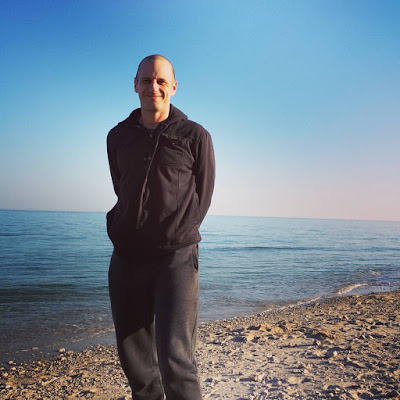 David Hadbawnik is a poet, translator, and medieval scholar. His Aeneid Books 1-6 was published by Shearsman Books in 2015. In 2012, he edited Thomas Meyer’s Beowulf (Punctum Books), and in 2011 he co-edited selections from Jack Spicer’s Beowulf for CUNY’s Lost and Found Document Series. He has published academic essays on poetic diction in English poetry from the medieval through early modern period, and is Assistant Professor of English at American University of Kuwait. His latest book, Holy Sonnets to Orpheus and Other Poems, was published by Delete Press in 2018.

Hardly at all, other than giving me the confidence that someone out there cared about my work. But that is to be expected given that the book, Ovid in Exile (Interbirth Books, 2007), was published by a small press as a labor of love. My most recent work, Holy Sonnets to Orpheus and Other Poems (Delete Press, 2018), builds on the translation practice I developed for Aeneid books 1-6 (Shearsman, 2015) and includes a free translation of some of Virgil’s Eclogues, responses to various “canonical” poems, and an extended sonnet sequence that plays off Donne’s Holy Sonnets and Rilke’s Sonnets to Orpheus. The practice became wilder and freer, and overall I just tried to have even more fun with it.

For a long time I was a fiction writer – my first short story, in second grade I think, was about a boy getting attacked by a robot as he walked home from school. And straight through high school and college, though I dabbled with poetry here and there, I focused on fiction. In my twenties I moved to San Francisco and began studying with Diane di Prima, and that was that.

It depends. Working on translation, say, of the Aeneid, is a very slow but satisfying process, because there I copy out the Latin and then rough out a translation, then write the “poem” version by hand in a different notebook, and finally type it into a document, editing and shaping along the way – so day by day, there are incremental but tangible results. For most of the poems in Holy Sonnets… I worked much more quickly, but it still helped to have some framework to start from, be it an actual translation or another poem I was responding to or a sense of sequence that I could plug into each day.

After 20-plus years I still don’t know how to start a poem. It’s a mystery to me. As it should be, perhaps. Sometimes I consciously start a project and keep at it for a long time and then the whole thing falls apart and I have to move on. Other times I like to work from exercises, which can seem either fun or contrived, depending. And then, as they say, there are the poems that just sort of arise seemingly from nowhere and tell you where they want to go. My first book was kind of like that, but for the Virgil I had to make conscious decisions and sort of nudge it along. As I get older there is less of the sustained “inspiration”-type poetry but more of a comfort level and confidence that it’s actually headed somewhere.

There’s a huge sense of anxiety around readings for many of us – others’ as well as our own – and I’m not immune to that. I think if you let the anxiety take over it can be counter-productive, in the sense that you might find yourself trying to please a certain crowd or meet some imaginary standard. But in fact poems live to be heard, and it’s important to sort of air them out and get that living response. I enjoy doing readings because I’m confident in the work and over time I feel I’ve developed a way of performing the poems that does them justice. Living in the Middle East as I have for the past three years, I don’t get to do readings nearly as often as I’d like; I’ve only been able to do one reading for Aeneid after the full book came out, and two so far for the new book, but I would love to do more.

Not at all, and in fact the theory I absorbed over ten years of grad school, while it was often fun and exhilarating to read, was detrimental to my poetry and had to be “unlearned” before I could pick up the thread and move forward. Having said that, I’m trying to discover ways to push at the concept of “translation.” As a medievalist, it’s striking to me that poets from previous ages didn’t really have these categories: “this is an original poem,” “this is a translation,” “this is an adaptation,” etc. There was just verse. You dipped into it and borrowed and shaped what you liked. So I guess the questions I’m grappling with – more trying to ask than answer – are “What is translation? Why do we need to think of something as a translation? What does it mean to divvy up poems into these categories?”

I like what Lew Welch had to say; something like, “the poet’s job is to listen to the din of the tribe and make a song out of that.” And outside of First-world, Western culture, that’s still very much what poetry seems to be. It’s been lost in the noise of late capitalism for many of us, but that seems to me the job.

I’ve been blessed with editors who are very supportive and easy to work with. Since small-press poetry is, as previously mentioned, so often a labor of love, there’s a real opportunity for poets to be involved in the editing, design, and even marketing process of a book as it’s made. Besides engaging with editors in the area of content, I’ve enjoyed having input on the latter elements of the process. As someone who’s been on the “editor” side of things, I really appreciate when a poet I’m working with embraces that role. What you are entering into when you agree to publish with someone is a relationship, and it goes both ways; the poems don’t magically appear in the world after they’re written. So for example with Jared Schickling and Crane Giamo at Delete Press for Holy Sonnets, I suggested an artist to provide the cover image, solicited the art from him, and had a really productive back-and-forth with the editors as the book went through the editing and design process, discussing everything from typeface to page breaks to the dimensions of the book to the cover design.

Diane di Prima says that a writer is someone who writes. This simple but profound statement completely removes the need for validation beyond one’s own relationship to the writing, and gives infinite permission to experiment, write badly, mess up, and start over as one learns the craft.

10 - How easy has it been for you to move between genres (poetry to translation to critical prose)? What do you see as the appeal?

It’s terribly difficult and I find that I am a “one thing at a time” type of writer. If I’m writing a critical essay then chances are I will have to submit to that process until it’s over. I see little distinction between poetry and translation, so that’s easier, but still by and large it’s one project at a time. The appeal of moving between genres is that different topics require different modes of attention and thus different forms, so one does well to keep fluent in them as much as possible.

A day begins if possible with a run. Being in the desert, that usually means the gym, but I run outside whenever and wherever possible. This helps get the blood pumping, clears the mind, and sets the tone for the day. As for a writing routine, that’s tough, but I carry a small notebook wherever I go and I try to write something in it, no matter how brief, every single day. When working on the Aeneid translation I try to copy out and translate 15-20 lines per day, which I find is a good discipline and something I can do in the 30-45 minutes I have before the demands of the day rush in.

I go back to the basics and play games with words and just try to notice something in the world that takes me out of myself.

Different things at different times. For a long time it was jazz – the avant-garde music scene in the Bay Area during the late 90s / early aughts, along with the greats like John Coltrane, Grachan Moncur, Albert Ayler, et al. who influenced them; going to art museums and galleries in the great cities; just standing for hours on end looking at the Diego Rivera murals in the Detroit Institute of Art, where I spent so many days during college.

I am endlessly inspired by writers who translate / channel / “creatively adapt” older forms of literature. This really begins for me with Chaucer, who almost never writes something wholly original but is always making a new version of something, with a particular and often hilarious twist. If we’re talking contemporary writers, then Anne Carson, Patience Agbabi, Thomas Meyer, Christopher Logue… Just last week I came across a newish book by Peter O’Leary called The Sambo, a reworking of part of a Scandinavian epic, and I was blown away by it.

Write a novel. Record an album. Translate something wild and obscure from medieval Latin.

Lack of skill as a musician.

Book: Valis by Philip K. Dick, which wasn’t so much “great” as mind-blowingly weird. Film: Black Panther, which did a pretty good job of being a kick-ass action film that also packed a powerful message.

Since it’s summer, I’m trying to push through the last couple books of the Aeneid, while also catching up on various academic essays, despite my “one thing at a time” rule.