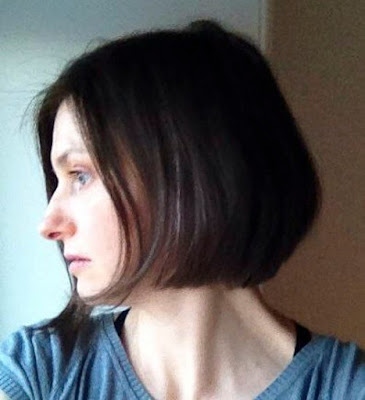 Sarah Venart used to write under her initials, S.E., but screw that. Sarah’s writing has been published in Numero Cinq, Concrete and River, New Quarterly, Malahat Review, Fiddlehead, This Magazine, Prism International and on CBC Radio. She is the author two books: Neither Apple Nor Pear/Weder Apfel Noch Birne and Woodshedding. A new collection, I am the Big Heart, is coming out soon-ish. Sarah lives in Montreal and teaches at John Abbott College.

I thought it would change things more than it did.  I didn’t yet understand that I’m always going to be learning all over again with each manuscript.

I didn’t.  It came to me.  First attempt was not successful (more on that later).  Second attempt came after grad school. I went to Banff for the fiction workshop but I spent all my time with the poets.  It felt like where I was supposed to be. And there is no greater cure for moodiness than finding the perfect line.

3 - How long does it take to start a manuscript? Does your writing initially come quickly, or is it a slow process? Do first drafts appear looking close to their final shape, or does your work come out of copious notes?

The first draft comes quickly, but after that it takes me forever. I will do anything rather than edit: run, grade essays, make regretful purchases, read gossip columnists....  I spend way too much time on Instagram.

4 - Where does a poem usually begin for you?

Usually it begins with something I see and want to describe.  This morning I was out running and I stepped on a bird and its guts made a soft pop sound.  So I got home and wrote that down.  It may become something.  Probably not, right?  No one wants to hear the sound of popping guts in a poem.

Not especially.  I’ve been told I seem at ease, but inside I’m a mess.  It’s hard to get up there!  And another thing: it means the world to me when a person from the audience says they liked a line or a word I used.  So when I go to readings, I try to give that to the poet who read.  We need to support each other.

“Why in hell are you trying to describe this?  WTF does this mean?”: these are my theoretical queries as I’m writing.  Self-doubt isn’t pretty.

Thoughtfulness is important.  Subtext is important.  Writers need time to think— that’s part of my role.  Quiet time isn’t validated these days, I find.   But if you give me time to stare, I can give you, you know, a little slice of surprise and maybe beauty.  That’s satisfying.  But if you can’t respect that, I also helped a guy with two suitcases run to catch a bus to the airport this morning. He said “God Blesses You.”  I took him at his word.

Love it. It is essential. Brick Books has some wonderful editors” I salute them!

Marge Piercy told me to take myself more seriously.  I appreciated her toughness. I don’t think this manuscript would have been completed if not for her sharpness with me.  She also said to Mary Panke, a poet friend of mine: “It is worth saying things that might liberate others.” That’s a tall order that I think both Mary and I have tried to write towards.  Another piece of advice I like:  Childish Gambino says “Never run back to what broke you.”  That’s true.

I take a nap; I go for a run; I leave the poem for a day or two; I flip through poetry books; I read the art reviews in The New Yorker; I dress the cat up in pyjamas.

Woodsmoke, hayseed, mildew, molasses and oats, warm manure.  I grew up on a farm.  I miss it every day.

Today, specifically, I’m reading Kevin Young’s sonnets.  But Hieu Minh Nguyen’s sort of almost prose poems are…  just…  I have had him on repeat all summer: he’s one of the best poets out there right now.

I always feel inadequate around other poets.  They know more than I do, their literary reach is far greater than mine…. I feel like I’m always trying to catch up for the time writing fiction.  Self-doubt is my enemy, obviously.
I’d like to write more prose poems.  I’d like to write more about my mother’s upbringing in Nova Scotia.  I’d like to edit and publish her poems and stories and her novel.

I’d like to have been a lawyer— that’s a little out there, but I think I could have gone to law school if someone had suggested that direction to me; I was sort of lost as a twenty-year old.

I’ve always loved reading.  And when I was younger, I was forever writing down lines from books in a journal I kept, a kind of quote diary.  And then, Douglas Lochhead, the poet and a professor at Mount Allison, told me I should write.  I’m grateful to him.  He meant a lot to me.

Last great film was Swiss Army Man.  You have to see it and then go on Twitter tell me if you hate it or love it!  I won’t say another word!  Last great book was not what I am currently reading, I can tell you that.  I am reading The Stranger Beside Me, by Ann Rule.  It’s research for a class I’m teaching this fall.  To temper that, I dip into the beautiful Collected Stories of Joy Williams. Now that is beauty.

I’m about to begin editing I am the Big Heart, which will be out in 2020.  It’s very exciting to begin this new chapter of my writing life.  Honestly, I wasn’t sure I’d be back, so I’m thrilled.

Posted by rob mclennan at 8:31 AM
Labels: 12 or 20 questions, Brick Books, Sarah Venart