My current project is based on the later poems of Baudelaire. I have on my table a copy of Paris Spleen and a stack of books about his work, stuff that is not yet online.

I am interested in his thoughts on poetry, how he arrived at making poetry through prose. I am less interested in distinguishing between poetry and prose than I am in our perceptions of them.

Perceptions are what I am particularly interested in, like what I said about stock narratives, stereotypes… Perceptions, like nightingales, are two things poets have to work with. (“9x11”) 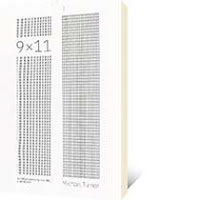 The latest from Vancouver writer Michael Turner is 9x11 (Vancouver BC: New Star Books, 2018), subtitled “and other poems like Bird, Nine, x and Eleven.” A follow-up, one might suspect, to his previous poetry title, 8x10 (Penguin, 2009) [see my review of such here], both for the minimalist form displayed throughout, as well as the obvious linkages between titles, but a collection that also plays very much off the ripples and consequences surrounding September 11, 2001. Composed as short, lyric vignettes, 9x11 is a book of distances and collisions, of ground-level street life, including coffeeshops, corner groceries and contemporary housing anxieties. Turner writes of a constant, and underlying potential for violence and repeated near misses, referencing a series of tensions, and acts of terror both contemporary and historically, such as the poem “Synesthesia,” that includes: “not the opposite of bombs dropped / concurrently on Hanoi, Nam Dinh and Viet Tri / but the appearance of an opposite / because what was sent to the moon / and what fell on North Vietnam / was the coffee mom bought at the supermarket [.]” Or, as the poem “Cold War” opens:

all day long we accumulate, and when we stop to ask ourselves why
we are shown a Soviet bread line, or a winter’s day in July

South Africa is a class problem, not a race problem, and for saying so
she is beaten by her sisters

In short, sharp lyric turns, Turner blends the daily mundane with the horrific, articulating how easily such terror becomes muted, presented and eventually dismissed, writing out wars in other places, and left far behind, yet with a violence that often perseveres; carries through, is carried, and continued. As the press release informs: “How you view 21st century life depends largely on the view from your place, which depends on where you can afford to live. In this suite of texts and poems written over twenty years that span the infamous towers, Michael Turner drops in to see what condition he’s in, a subject whipped into insistence by the rhythms that shape his city, his neighbourhood, his universe.”