Shazia Hafiz Ramji, port of being

Birth from our own skin

Body that hangs and holds

At the back of the room hands wait

To be held in court

To speak a warm fabric of lips

Gaze that hangs and holds

Scholar alone in the office

Decoys of chat and lovers

Hands that hang and hold

Faces of men and women

In the night of a still life

Vancouver poet and editor Shazia Hafiz Ramji’s debut full-length collection, winner of the 2017 Robert Kroetsch Award for Innovative Poetry, is port of being (Picton ON: Invisible Publishing, 2018). Hers is a collection composed as a book of dislocations, implications and accumulations via short lyrics that explore borders, violence and human connection. The poems in port of being are deliberately constructed to keep the reader off-balance, employing sequences of fragments that layer upon layer into something unsettling, writing on violence, distant wars, social media, internet cables, death, borders and the horror at an increasing disregard of facts. port of being writes from the slippages of what was once actual or presumed solid ground, writing from a series of negative and positive shifts, from what hadn’t been acknowledged before, to what never should have occurred. As she writes to open the poem “Heat”: “Birth from our own skin // Concerns over devaluation // Body that hangs and holds [.]” Ramji writes from a dangerous place, one that comes from knowledge and acknowledgment, attempting to articulate how one might navigate in such a landscape, such as this fragment, from the middle of the poem “Secret Playground”:

It doesn’t make sense to ask
if words will ever stop failing me
but I want to ask it. What does it take
for a three-year-old who lived on M&Ms
and barely escaped the Gulf War
to call the first part of her life
“simulacra”?
I didn’t tell you
because I still don’t believe it.
In Toronto, I read a poem
about another part of my life,
one I still find hard to believe
when I’m not with myself. 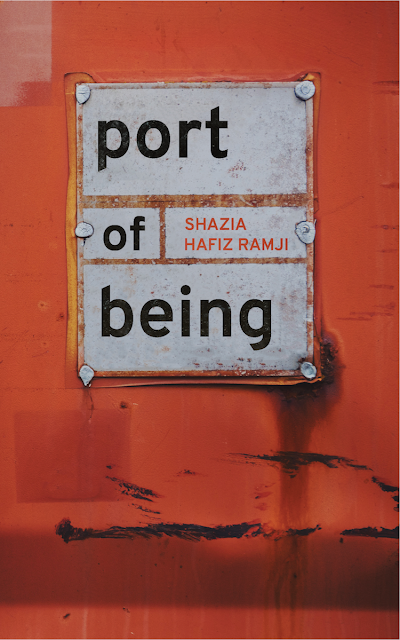 Ina recent interview posted at Train : a poetry journal, she spoke to the difference between compiling the poems in her chapbook Prosopopoeia (Anstruther Press, 2017) and this debut full-length collection:

Prosopopoeia brought together some poems I'd written over the years. It's not necessarily unified, though themes and connections emerged after seeing the various pieces in conversation with each other. The chapbook clarified my obsessions with surveillance, geography, time, and relations between people and objects, and it began to couple those with more personal experiences of loneliness, addiction, and clinical depression. Recognizing these connections in the chapbook was crucial for the book. When I was writing Port of Being, I constantly jostled with the weight of these personal experiences and a sense of responsibility to facts, history, and the experiences of other people. This struggle was intensified when, a few years ago, a thief who stole my laptop followed me and had knowledge of my whereabouts. It was a traumatizing experience that made the more removed preoccupations with surveillance and space far more personal and immediate. The book has a clear arc (at least to me) that moves into the lyrical. I should clarify that the book isn't about me being stalked, though. I've preferred to tell it slant (thanks to Emily Dickinson for the wise words!). It began with research, which led me to undertake a kind of surveillance (after Vito Acconci's Following Piece) in return, and this gave rise to the first part of the book. The process of putting together the book was like following a trail of myself in the world and mapping it all together. I learned so much about the world (for lack of a better word) when writing this book and that makes me feel okay.

One might think she writes for the same reason as Dany Laferrière’s narrator, “Dany,” in the novel Why Must a Black Writer Write About Sex? (Toronto ON: Coach House Books, 1994), offered for writing his own first novel: I wrote this book to save my life. Shazia Hafiz Ramji’s poems, while betraying the occasional exhaustion, exasperation and frustration, don’t fall entirely into hopelessness, providing a glimmer of something beyond mere survival. “In the morning we consider ghosts.” she writes, to end the poem “Nearness”: “I feel the sun settle on my ear.”