Trees make sense
of the snow, yet
at a certain vicinity
they too become
inarticulate fields.
The trees are limits
to their own
significance. Their
shapes in relation are
momentarily the mind,
but a swell rises with
looking. It’s like
a tongueless appetite
almost. As
neighbourhood sparrows
resist enumeration,
the scene offers itself
completely. The wood
absorbs the light.
The air speaks incessantly
with restless hands. 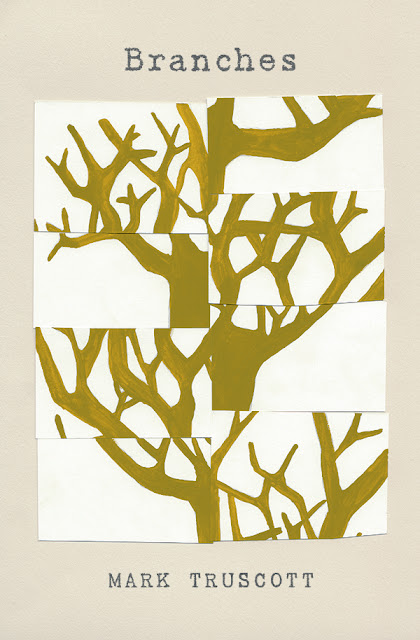 Toronto poet Mark Truscott’s third full-length title, Branches (Toronto ON: Book*hug, 2018)—following Said Like Reeds or Things (Toronto ON: Coach House Books, 2004) and Nature (BookThug, 2010)—manages a quality of density that feels different than the poems in his first two collections. The poems in Branches further his seemingly-ongoing explorations into brevity, meditation, compactness and the single, extended moment, but there is something else as well, with poems that, while losing none of their brevity or density, are longer, and more expansive. His poems rely on a deep and slow kind of attention, as well as allowing space for the perpetual surprise. There is something very quiet, and perpetually understated, about Truscott’s work, unlike the more immediate, even electric, elements of the short poems in Cameron Anstee’s recent debut of very short shorts [see my review of such here]. In extremely compelling ways, both poets do write out their silences, managing to outline near-infinite lines around just how much unspoken their poems contain, but Truscott’s do in the same way that bare tree branches (to continue his own metaphor) outline the sky: we know there’s so much more to the silence than this. We can see it.

I know the familiar
indescribability of the
commonest surfaces.
Porous soil and dirt,
dusty light streaming
off painted wood and
plastic. The hand gets
closer than the mind.
The mind gets this, but
still it feels the need to
understand and trace
its understanding.
It wants to be in the world.
It wants to strike some
impossible balance.
Its interval is very thin.

Posted by rob mclennan at 8:31 AM
Labels: BookThug, Mark Truscott