Stilled as in image, at dawn sliding into
blue harbor, boats clang, where does he
the man I imagine gripping several ropes
return from. Is he conflicted, does he
perceive the sky oscillating like
a dimmer machine, a mouth, a war, language
not declaring its most
effective self. Bellum grazing ever nearer
to beauty, a possible apotheosis how
what is left of sense
is comfort. Not inebriated much anymore
I retuned a lawn to stand in, crueler
was always signing to our mutual forks,
knives. Our translation
of a subject drones
on unblinking, something black for him
returning, his forearms there laid
themselves down, ships gone out another
pale-plated night.

Produced as winner of The Ottoline Prize, as selected by Hoa Nguyen, is New York poet Wendy Xu’s second collection, Phrasis (Albany NY: Fence Books, 2017). Following her first collection, You Are Not Dead (Cleveland State University Press Center, 2013), Phrasis is built as a quartet of unnamed sections of short lyrics (the exception being a longer sequence sharing the book’s title, itself constructed out of short lyrics; one of three different poems within the collections that share the title). There is something intriguing about Xu’s use of the straightforward line; her poems are composed in a manner deceptively simple, and yet, include unexpected turns and twists, managing shifts as subtle as the slightest change in tone. As contest judge Nguyen writes on the back cover: “The poems in this collection play word against words, expression against frame. Is language a form of thought-bondage? How can poems escape and bring us closer to the personal and the possibility of intimacy?”

Maudlin, from Mary, the first word in lying on a couch to be alone with you, crying up no night’s sleep.

I read a book where one speaks for another beneath a balcony, some of wording love is for the idea of soul (“Phrasis”) 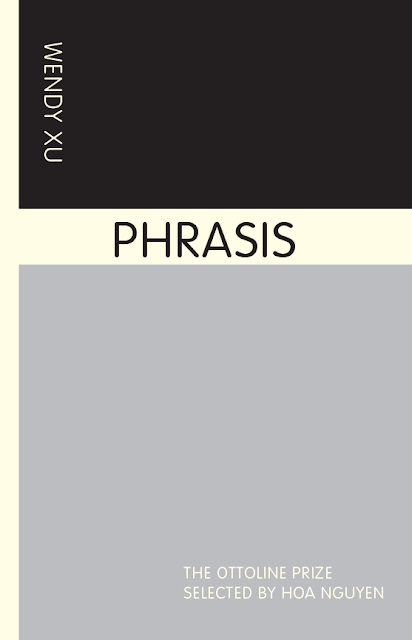 Each section opens with a short untitled poem, held almost as Greek chorus, setting the tone for what follows. Xu’s poems might, as the back cover suggests, revel in the fragment, but does as much in the small moment, composing less a fragment than a short burst that requires no further explanation. Her poems are wonderfully self-contained, yet interact in a way that the entire collection could be considered a lyric suite, composing a whole unit of smaller parts.
Posted by rob mclennan at 8:31 AM
Labels: Fence Books, Hoa Nguyen, Wendy Xu