It is already a month
since I left
the hospital.

Like everything in letters
there is a little
& a ligature. 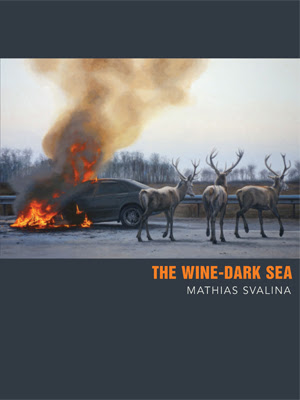 The seventy-six poems that make up Denver, Colorado poet and editor Mathias Svalina’s fifth poetry collection, The Wine-Dark Sea (Portland OR: Sidebrow Books, 2016), are each no longer than a page, and hold the same title as the collection (which makes the table of contents, listing every one of the seventy-six same-titled poems and their corresponding pages absurdly entertaining). The poems in The Wine-Dark Sea explore a rather dense and occasionally dark, surreal and abstract lyric, one that is reminiscent at times of the work of Paris, Ontario poet Nelson Ball (or certain poems by Stuart Ross), for their density and meditative tone. There is almost a zen quality in some of these pieces, as he writes: “Each day emerges / in apprise. // No one / can be / companion— // the grass // purely / containment.” There is something fantastic in the way Svalina composes so many poems under the same title. One could argue it would be relatively easy to compose one poem under such a title, or even a couple, but seventy-six poems with similar tone and structure without lapsing into repetition or mediocrity is simply stellar. It makes me curious to know if he composed more than he required and cut down, or simply worked like hell on every single piece, carving and cobbling lyric fragments together into these smart, well-crafted and incredibly powerful poems. The Wine-Dark Sea is sharp as hell, and a marvellous achievement.

Wet bodies
burst
in the sun.

I need new songs
to bite this lip off

to find the more
fragile lip.

I can only
canopy,

the song always on

the radio,
the radio