Scenario: the couch is a room, and I walk
into it. Everyone knows cows have seven
stomachs, but no one cares what this means
for the grass. I’m going down again and again,
feeling the system in parts. If I could only
have one life, I’d swallow it. And keep coming
back to the same words. I’ve got you in mind. (“Conditions”) 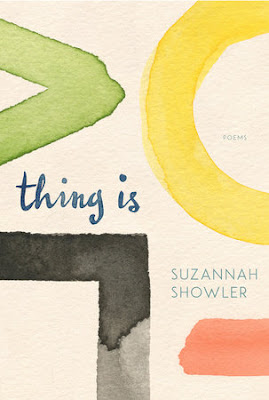 The follow-up to Suzannah Showler’s debut poetry collection, Failure to Thrive (Toronto ON: ECW Press, 2014) [see my review of such here], is Thing Is (Toronto ON: McClelland & Stewart, 2017). Thing Is continues Showler’s exploration into the lyric, composing poems of uncertainty that explore the very nature of being and consciousness, while attempting to come to terms with just how it is the world exists, and we, individually, upon it. The book is structured in four sections, as she names her table of contents “Personae”: “Concerned with consciousness, enclosed spaces, negation,” “Concerned with beauty, sadness, sleep,” “Concerned with haunting, the afterlife, being a ghost” and “Concerned with interpersonal communication, empty spaces, the future.”

Showler composes her poems as lyric essays, each poem working towards a single, book-length goal. Despite, or even because of, the author/narrator’s inherent skepticism, the short poems of Thing Is seek answers to impossible questions, as Showler patiently and meticulously disassembles the world through language in an attempt to understand how the mechanism works. To open the poem “Not Not,” she writes: “When it comes to classification, / the thing you aren’t after isn’t // the worst place to start.” The idea of naming is one that comes up a couple of times throughout the collection, such as in the poem “False Negatives,” where she writes: “Naming a substance is an act of feeling / for principles of unity.” To name something is to make it tangible, and this collection is ambitious, seeking out what might be impossible to find, and yet, fascinating to engage. This is a sharp collection of poems, comparable to similar works by Adam Dickinson, Stephen Brockwell and others for their ongoing investigations into phenomenological studies. Elsewhere in the collection, to open the poem “Too Negative,” she adds:

I was a kid other kids’
parents gossiped about.

They told their children
what I was: too negative.

I get it. Fair to fear
contagion of bad attitudes,

to think naming a thing
can be an inoculation.

Posted by rob mclennan at 8:31 AM
Labels: McClelland and Stewart, Suzannah Showler