Words
on this white paper

It really is wonderful to see the publication of Certain Details: The Poetry of Nelson Ball, selected with an introduction by Stuart Ross (Wilfrid Laurier University Press, 2017), a collection showcasing some fifty years of poetry production by Paris, Ontario poet, editor and bookseller Nelson Ball. Ross certainly has been busy lately, with a selected poems he’s edited by Ottawa poet Michael Dennis out any day now through Anvil Press, and moving his long-running imprint from The Mansfield Press over to Anvil, with the first titles from such appearing over the next year. For those familiar with Ball’s work—produced over the years through numerous small press books, chapbooks, pamphlets and leaflets—his precision and timing is unmistakable, composing sublime poems that are infamous for their capacity to hold both volume and breath in such small spaces.

Some mornings
as I awaken

I compose a poem
in my head

usually gone
when I get to my desk

this morning
I caught one 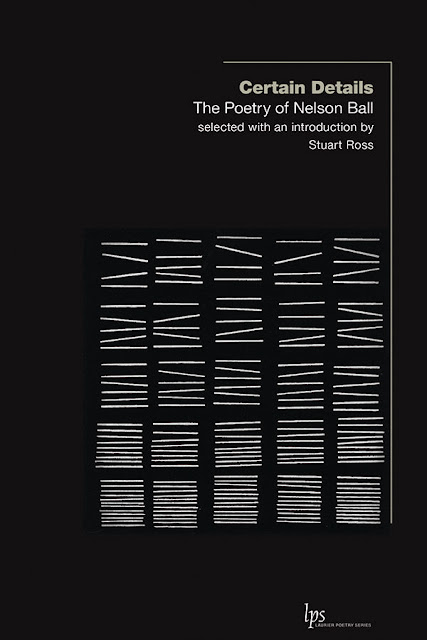 However quiet and unassuming both he and his work might appear (Nelson is notoriously both deeply humble and generous), Ball’s work has gone on to influence multiple generations of Canadian poets, including jwcurry, Gary Barwin and Ross himself as well as Mark Truscott, Kemeny Babineau, Michael e. Casteels and Cameron Anstee, among so many others. One might suggest that such a selected volume is long overdue. As Ross’ introduction writes:

We examine every line break and every stanza break—guessing why he did what he did—and in the end we agree that the poem couldn’t be broken up in any other way and still accomplish what it accomplishes. We note that Nelson loads maximum power into each word—not only through his choice of words but through his placement of each word. And through the breaks, he precisely controls the velocity of the reader’s experience of the poem. He offers up poems that invite meditation, invite rereading. Just as with the most minute details in nature, or with the spinning wheel of a car, or a single woolen glove lying on a dirt trail, the more you look, the more you see.
It is this unrelenting attention to detail, this devoted precision, this respect for every individual word—every syllable, even—every space, every punctuation mark, and every line space and stanza break, that makes Nelson Ball one of Canada’s most remarkable poets.
Nelson is what might be called a poet’s poet: he is widely revered by many Canadian and international poets. But Nelson is also a people’s poet: his work is instantly accessible, plainspoken, direct. Whenever I introduce his poetry to a group of students or an individual, Nelson earns new fans. Regardless of the type of poetry the student is writing, or wishes to write, there is admiration for and interest in Nelson’s poetry. I sometimes refer to him as Canadian poetry’s secret weapon. Anyone—even those with no prior experience with poetry—can read a Nelson Ball poem and find pleasure in it. That may be true of any poem, but people often say they “feel stupid” or “it went over my head” when they don’t “understand” poetry. It’s a rare Nelson Ball poem that can make anyone feel stupid. In this way, Nelson’s work has a universal appeal among those who can read and understand English. He is not just an academic; you don’t need a background in theory or any special training to enjoy his work.

The volume concludes with a short essay by Ball, which editor Ross suggests is Ball’s first published prose on his work, in which he describes some of how he writes, and how he got to where he is now.

I liked haiku as simple nature poems. But I didn’t want to restrict the forms of my poems, so I didn’t try to write haiku. In truth, I had difficulty identifying and counting syllables. I had a strong desire to write poems of pure description, letting the image reveal itself without any direct statement of idea or emotion. I found it difficult to make this kind of spare expression work. My observations of both the world and of words and language were too generalized, not particular enough. I was looking for some kind of magic rather than looking at the particularities of words and the world.

One can never fully stress the care that goes into the composition of Nelson Ball’s poems, but one shouldn’t overstate such, either. The poems are remarkable, and deserve multiple, slow readings. It is a grand thing to see such a collection, especially one put together by an editor as attentive as Stuart Ross.