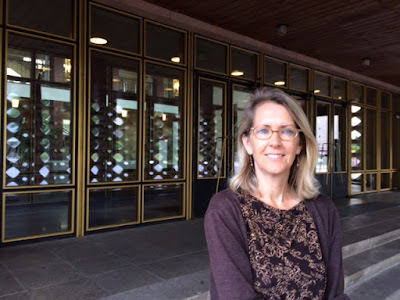 Molly Bendall is the author five collections of poetry, After Estrangement, Dark Summer, Ariadne’s Island, Under the Quick, and most recently Watchful from Omnidawn press. She also has a co-authored with the poet Gail Wronsky Bling & Fringe from What Books.  Her poems and translations have also appeared in the anthologies: American Hybrid, Poems for the Millenium, and Satellite Convulsions: Poems from Tin House.

She has won the Eunice Tietjens Prize from Poetry magazine, the Lynda Hull award from
Denver Quarterly and two Pushcart Prizes.  She currently she teaches at the University of Southern California.

1 - How did your first book change your life? How does your most recent work compare to your previous? How does it feel different?
It was definitely affirming for me when my first book came out. I felt I had arrived in the literary world even in a small way. I love the book as object, the materiality and feel of it. I got to choose the cover which I really appreciated, and I’ve been able to choose all my book covers since, and this has been important for me and the sense I have of the book. Also, the idea of other people holding the object and putting it on their shelves is a wonderful way of being in the world. I still feel that way with each book, and each new collection makes me want to keep going further with my work.

2 - How did you come to poetry first, as opposed to, say, fiction or non-fiction?
I was lucky that I had a mother who read poetry to me at a very young age.  Of course,
it was poetry written for children—the greats, such as Eugene Field, Robert Louis Stevenson,
Christina Rossetti, Walter de la Mare.  I became aware of language having rhythms and cadences by hearing these poems.  Also, since I was so young, the language was mysterious and often inscrutable to me, and that sense of it stayed with me.   I was also a dancer when I was young, and the structures and movements of dance are more like the expressions of poetry than prose I think.

3 - How long does it take to start any particular writing project? Does your writing initially come quickly, or is it a slow process? Do first drafts appear looking close to their final shape, or does your work come out of copious notes?
I usually take at least a year when I begin a new project. A year of jotting things down and writing many poems that usually fail. I find that this is necessary for me to get at the voice, rhythms, and diction I want. Also, it takes a while for me to have a focus or theme that I become nearly obsessed with.

4 - Where does a poem usually begin for you? Are you an author of short pieces that end up combining into a larger project, or are you working on a "book" from the very beginning?
Sometimes I work on a small group of poems thinking it will become a sequence, and then sometimes a single poem I’m writing is related thematically to other pieces I’ve worked on. And as I mentioned, I usually will have a kind of focus that includes voice, rhythms, a lexicon, with some variations, and I try to keep writing poems with these in mind, which after a long while becomes a book.

5 - Are public readings part of or counter to your creative process? Are you the sort of writer who enjoys doing readings?
I find readings are quite helpful to me in understanding how my work is coming across. I like
presenting the poems through my voice and expressing the words and lines. And I think it’s interesting to hear others read their work also. I often play audio recordings of poets when I teach. I like the reactions from students as they hear the rhythms and intonations of a particular poet.

6 - Do you have any theoretical concerns behind your writing? What kinds of questions are you trying to answer with your work? What do you even think the current questions are?
My recent book concerned itself with human and animal relations.  The poems also explored an elegiac stance. In a larger sense, I would say I’m interested in the expressiveness of language and how it can subvert logic and representation but still have emotional or spiritual resonance.

7 – What do you see the current role of the writer being in larger culture? Does s/he even have one? What do you think the role of the writer should be?
Writers (and all artists really) help put us in touch with the limitlessness of our inner lives as well as the reaches of our outer and social lives. Their responsibility is to the work itself, which expresses and illuminates our world, including the shameful and negative aspects. And poetry reminds us how rich and complicated language is and how fortunate it is that we have this way of expressing ourselves. I guess I would also say we, as poets, have a responsibility to explore and to show language’s possibilities and not just opt for the ordinary and easy.

8 - Do you find the process of working with an outside editor difficult or essential (or both)?
I found it was really valuable working with both Rusty Morrison at Omnidawn and Jon Thompson at Parlor Press.  They were close readers of my work and saw things in it that I didn’t always see.  I am so grateful for their generosity.

9 - What is the best piece of advice you've heard (not necessarily given to you directly)?
One of my teachers, the poet Charles Wright, said “You have to become obsessed with something and keep working on it.” That seems obvious to me now. I just had to listen to what my obsessions were.

10 - How easy has it been for you to move between genres (your own poetry to translation)? What do you see as the appeal?
I recently wrote a long critical essay on the poetry of Christine Hume. I found that I had to stay in that analytical head space for quite a while. I enjoyed this hard work, and it taught me a lot about critical reading and writing, but I was glad to get back into the head space of writing poems. And then I regularly write shorter reviews of books which is fun, and I think it’s important to recognize books that I admire and that I feel are exploring something in a new way.

11 - What kind of writing routine do you tend to keep, or do you even have one? How does a typical day (for you) begin?
I work early in the morning usually, but I like to take a note or two anytime of day or night.

12 - When your writing gets stalled, where do you turn or return for (for lack of a better word) inspiration?
Often, I turn to other books, sometimes poetry, sometimes fiction in order to soak up some wonderful language. I also go and look at things: landscapes, like the ocean nearby, art, animals, fashion, street life. I do like to absorb the world. I write final drafts and editing in a quiet space, but when I jot down notes I like to be around things, the colors and movements of the world.

13 - What fragrance reminds you of home?
Sheets hanging on a clothesline, newly raked leaves

14 - David W. McFadden once said that books come from books, but are there any other forms that influence your work, whether nature, music, science or visual art?
Again, lots of things can inspire and influence my work.  I love to go to museums, not only art museums but historical museums where there are many artifacts to ponder. And with my last book Watchful, the zoo was an important place for me to go.  It was a place that was intriguing and troubling at once.

15 - What other writers or writings are important for your work, or simply your life outside of your work?
So many now and from earlier in my life too: Wallace Stevens, Theodore Roethke, Sylvia Plath, Barbara Guest, Medbh McGuckian, Lorine Niedecker, Christine Hume, Harryette Mullen,  Elizabeth Bowen, Colette, Herta Muller, John Berger, Gaston Bachelard, Rebecca Solnit, Amy Leach.

16 - What would you like to do that you haven't yet done?
I’d love to go on an archaeological dig anywhere in the world.

17 - If you could pick any other occupation to attempt, what would it be? Or, alternately, what do you think you would have ended up doing had you not been a writer?
I probably would have continued being a dancer for a little while longer, although that career is fairly short.  Then I would have maybe been an historian, digging through archives.

18 - What made you write, as opposed to doing something else?
I’ve always loved books and wanted to make one of my own, and I was drawn to the solitary activity of writing.

And the film, Cave of Forgotten Dreams by Werner Herzog.

20 - What are you currently working on?
I’m reading about women who found themselves under regimes and struggled against them in various ways.  I learned and read about Elizabeth Van Lew who lived in my hometown of Richmond, Virginia, and she risked her life spying for the Union during the Civil War. Also, I’m reading the amazing writings of Herta Muller who lived through the Ceausescu regime in Romania.

I’m thinking about these women and the psychological space of these kinds of struggles as I’m
writing some new poems.