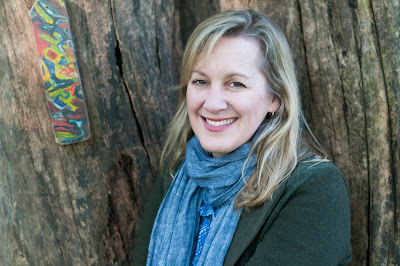 Christine Fischer Guy’s debut novel is The Umbrella Mender. Her short fiction has appeared in Canadian and US journals and has been nominated for the Journey and Pushcart prizes. She contributes to Ryeberg.com, The Millions, Hazlitt and the Los Angeles Review of Books. She teaches writing at the University of Toronto’s School of Continuing Studies.

1 - How did your first book change your life? How does your most recent work compare to your previous? How does it feel different?
I feel a bit more patient with the process and also acutely aware of the chasm between what I can do on the page and what I want to do on the page.

2 - How did you come to fiction first, as opposed to, say, poetry or non-fiction?
I haven't written nonfiction in book form, but I’ve been a freelance journalist for a long time, so nonfiction was my comfort zone. Writing a novel was an abiding desire since forever. I’ve always been an obsessive reader of fiction and wanted to do on the page what my favourite writers had done for me.

I read poetry all the time to fill the word and image well but am a little afraid of it. I’ve only ever written it in times of emotional distress and never shown it to anyone because it’s awful! One day I’ll screw my courage to the sticking place and take a poetry workshop.

3 - How long does it take to start any particular writing project? Does your writing initially come quickly, or is it a slow process? Do first drafts appear looking close to their final shape, or does your work come out of copious notes?
I’m a slow writer and like to choose projects that require research (because I love to do that) and yes, copious note-taking. That factual scaffolding energizes me. Rarely something will come out right the first time, but more often I’m making what I’ve come to think of as preparatory sketches and refining them over many drafts. With the new novel, I’ve been writing the first draft longhand. I like the way that has changed my process: it’s easier, somehow, to let it rip. I can’t obsessively comb over sections I’ve already written. I have to keep going forward.

4 - Where does a work of fiction usually begin for you? Are you an author of short pieces that end up combining into a larger project, or are you working on a "book" from the very beginning?
My debut novel knew it was a novel from first inception, though I did take a few of the characters for test drives in short stories. The novel I’m working on right now also knew it was a novel from the beginning. These longer projects suit my process: I like to take time to let ideas and characters develop and evolve over time.

5 - Are public readings part of or counter to your creative process? Are you the sort of writer who enjoys doing readings?
A few of the reading series here in Toronto were really helpful to me while I was writing The Umbrella Mender. It’s such a long road. Having people listen and say supportive things about a scene or a chapter was much-needed fuel to keep running that marathon. Having said that, I haven’t yet figured out how not to get nervous before readings, every single time. I am not a performer!

6 - Do you have any theoretical concerns behind your writing? What kinds of questions are you trying to answer with your work? What do you even think the current questions are?
I have a lot of questions about love. That’s a lifetime project, not a one-book project. I’m also very interested in silence/silencing and the role it plays in relationships and communities. That second question is central to the new book I’m working on, and it seems to be emerging (again) in the world at large: who can say what and how they’re allowed to say comes up again and again, everywhere.

8 - Do you find the process of working with an outside editor difficult or essential (or both)?
It’s not necessarily the editor that makes the process of editing difficult: it’s essential work that no book can do without, and it’s never easy. If you’re lucky, you’ll get to work with someone who understands what you’re trying to do and wants, as much as you do, to help the book become its best possible self. The best kind of editor shows you the trouble spots and trusts you work it out.

9 - What is the best piece of advice you've heard (not necessarily given to you directly)?
Kevin Barry: “You can’t lie in fiction. Your soul is there, pinned and wriggling on the page.”

10 - How easy has it been for you to move between genres (journalism to short stories to the novel)? What do you see as the appeal?
It was ten years between the idea for my first novel and its birth. That’s largely because finding my voice took time. You can get along very nicely in journalism without one; in fact, it’s discouraged unless you’re a columnist. I’m not sure that was fiction’s chief attraction, but it was a necessity. Its appeal? Like I said earlier, I wanted to be doing what my favourite authors had done for me.

11 - What kind of writing routine do you tend to keep, or do you even have one? How does a typical day (for you) begin?
My kids still live at home, which means that I don’t go straight to the page as often as I’d like. That’s the ideal situation for me: working in that in-between space between dreaming and waking. More often I’m in the kitchen being domestic before I sit down to work, and if it’s cycling weather, I’m out for an early ride first. Then I make a coffee, sometimes meditate (I should do that more often, come to think of it), and sit down to do research reading or write, depending on where I am in the process.

12 - When your writing gets stalled, where do you turn or return for (for lack of a better word) inspiration?
If I’m working on a novel, I go back to the research. If I’m really stalled, I might go out for a walk or read something inspiring.

13 - What fragrance reminds you of home?
Hmm. Probably lavender, because I always have lavender oil around.

14 - David W. McFadden once said that books come from books, but are there any other forms that influence your work, whether nature, music, science or visual art?
Actually, all of those things play a role. Visual art definitely challenges my thinking and inspires me and I’m lucky to be able to see quite a lot of it in galleries here and Toronto and elsewhere. I live beside High Park in Toronto and I’m walking or cycling there several times a week. It calms me, which I need to be able to write. I love to read popular science, particularly brain science—it’s such a hopeful branch. Classical music is part of my new book, and listening to a volume of it over the past couple of years has taught me much about theme and structure.

I use research photographs as visual prompts for scenes I'm working on and always have some pinned up around my workspace.

15 - What other writers or writings are important for your work, or simply your life outside of your work?
I read and listen to poetry regularly to fill the language well, and I return to Alice Munro again and again. She’s taught me about being a woman writer as well as being a woman—what we’re allowed to have and to want.

16 - What would you like to do that you haven't yet done?
Become a falconer.

17 - If you could pick any other occupation to attempt, what would it be? Or, alternately, what do you think you would have ended up doing had you not been a writer?
I’d be in academia. I had my MA fairly young and got out for a while, always planning to return. I’d embarked on a doctorate, first term actually, when the idea for my novel appeared. I had two young kids then, and knew I couldn’t do all of those things, so I left the program.

18 - What made you write, as opposed to doing something else?
That’s hard to answer, because even though I’m a late bloomer in terms of writing fiction, I’ve always written. Writing helps me process the world and my way of being in it.

19 - What was the last great book you read? What was the last great film?
I’m still searching for something as great as Elena Ferrante’s Naples books. I read them last year and it was a flashlight-under-the-covers situation. It has been a long time since a book swept me off my feet like that. Same is true for Terrence Malick’s Tree of Life. Still looking for something that can equal that. I guess I should see his new documentary.

20 - What are you currently working on?
I’m working on a new novel, and I’ve already said as much as I’m willing to say about it!

Posted by rob mclennan at 8:31 AM
Labels: 12 or 20 questions, Christine Fischer Guy, Wolsak and Wynn