The 8th “dusie kollektiv,” as curated by myself, is now online! Pdfs of chapbooks produced and mailed last year as part of this 8th curated kollektiv. See the link here to read all sorts of dusie goodness from across North America (and occasionally beyond!). The list of titles online include: 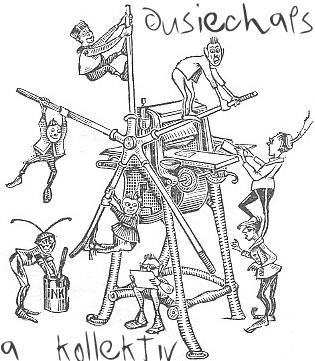 In spring 2015, Dusie Emperor Susana Gardner allowed me to curate the eighth “dusie kollektiv,” the results of which we are finally able to present to you here.

Organized and fueled by Gardner, a poet and American expat (she has since returned to the continental United States), the “dusie kollektiv” is a series of curated lists of poets who each self-produce a small publication in a large enough quantity to send copies to everyone else in their specific “kollektiv.” With eight “kollektivs” completed so far, it was originally produced as an extension of her work through the online pdf poetry journal dusie, founded after Gardner moved to Switzerland as a way to keep in contact with her American poet-friends, but it might just have developed a life of its own.

What I’ve admired about the gift-economy structure of the “kollektiv” is in its simple ambition: allowing a group of engaged writers to interact with each other across vast distances. When I participated in the fifth kollektiv a few years back, it involved sending chapbooks out to a list of ninety other participants; chapbooks appeared in my mailbox for weeks, many by poets I wasn’t previously aware of. For my part, I mailed six to Europe and the remainder to the United States, which cost a small fortune, given I was the only Canadian resident, and but one of two Canadian participants (the other being Frances Kruk in London, England).

For my “kollektiv,” I offered an open invitation to previous participants (most of whom are poets scattered across the United States), as well as solicitations to a whole swath of Canadian poets engaged with small and micro-press, attempting to connect a series of communities and individuals that otherwise might never have met. The results have been intriguing, knowing that there were multiple poets being introduced to each other for the first time. Some cross-pollination has already occurred, with familiar names appearing at Amanda Earl’s NationalPoetryMonth.ca, for example. One hopes that such cross-overs continue, are many, and wide-ranging.

And now you, too, can see what all the fuss was about. Read on:

Posted by rob mclennan at 8:31 AM
Labels: dusie