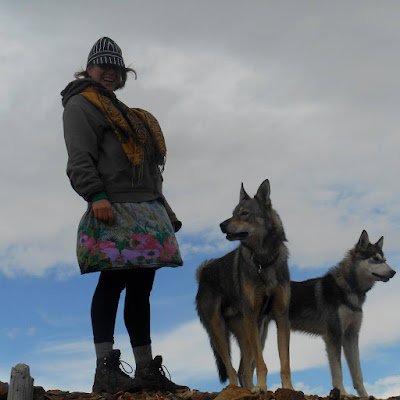 Leesa Dean is a graduate of the University of Guelph’s creative Writing MFA program and a full-time Creative Writing and English instructor at Selkirk College in Nelson, BC. Her short story collection, Waiting for the Cyclone, was published by Brindle and Glass this October.

How did your first book change your life? How does your most recent work compare to your previous? How does it feel different?
Waiting for the Cyclone is my first book so it’s difficult to compare with previous work unless I consider the “Allie the Alien” series I self-published at age 8. Actually, let’s compare that for fun. At age 8, I was really into drastic narrative arcs, action and fanfare. Someone needed to save the world or be a hero, otherwise there was no story. Now I’m interested in the other end of the spectrum. I don’t want to call the women in my collection anti-heroes, because they’re not, but they certainly aren’t heroes, and they’re definitely not saving the world.

This book is both a beginning and an end—it’s coming at the end of a string of important life events for me that include finishing a Master’s degree, moving across the country, starting a teaching career in Creative Writing and committing to a geographical location for the first time. But actually finishing a project, something I’ve traditionally struggled with, gives me confidence that this is the beginning of what I hope will be a long writing career.

Perhaps the biggest shift, though, is having an audience. I mean, it’s still small—a handful of friends and reviewers—but on October 4th, this book becomes public domain. In certain ways, I feel like I’m waiting for the cyclone. Will people like it? Will I care if they don’t? I generally subscribe to an “I don’t give a f*#k” attitude, but for some reason, this feels different.

How long does it take to start any particular writing project? Does your writing initially come quickly, or is it a slow process? Do first drafts appear looking close to their final shape, or does your work come out of copious notes?
My writing life is an untameable beast. I have basically no control over it. Certain stories take three hours to be almost fully formed and others take seven years. I wish I could wrangle that aspect of my existence into some sort of coherent, predictable form, but I suppose the chaos balances out my more structured life as a full-time professor.

Where does a work of fiction or non-fiction usually begin for you? Are you an author of short pieces that end up combining into a larger project, or are you working on a "book" from the very beginning?
This particular book is a pastiche of well thought out plots and absolute flukes. Some of the stories come from my life—I did have an aunt, one I loved, who was stealing pharmaceuticals and shooting them at night while upholding her façade as a wonderful mother, and my own mother had a heart attack just like the woman in the story titled One Last Time. I’ve travelled to all the places I wrote about, and a lot of these stories began with the town/city as the main character. But other plot elements and characters came to me unannounced, unexpectedly. In the book’s title story, for example, there’s a deaf woman who looks like a German soldier and her deaf husband, a thin black man with brassy curls and one pierced ear. Every time I read that story, I think, where did they come from? I’ve never met anyone like them in my life.

Do you have any theoretical concerns behind your writing? What kinds of questions are you trying to answer with your work? What do you even think the current questions are?
I absolutely have theoretical concerns. As a writer and a woman, I’m very interested in how certain women are rebelling against traditional gender roles. I grew up in a nuclear family, created from two nuclear families, with the unspoken expectation that I should one day grow up and have my own nuclear family. My mother had a job for a while, but a lot of her life was spent being a housewife. She didn’t have any of her own money and spent so much of her time indoors, cooking and cleaning. She is emblematic of so many women from too many eras.

My mother was rebellious in her own way—she was mouthy and liked to yell at my father. She loved him, yes. She loved being a mother. But I’m not convinced she loved all the constrictions that came with the lifestyle. The women in my collection are engaged in similar struggles, but overall, they take more drastic actions. They lie. They cheat. They abandon their children to do yoga retreats in India or fake volunteer work to go on romantic rendez-vous behind their husband’s backs. They leave their unwanted babies on church doorsteps. Are they terrible people? Yes. A lot of them are. My characters have often been called “unlikeable.” One reviewer called them “unworthy of sympathy,” which kind of broke my heart. I have a lot of empathy for these women because so many of them are trapped in a system, a type of romance that is gender-biased and potentially damaging, and the only way they know how to rebel is to lash out.

What do you see the current role of the writer being in larger culture? Does s/he even have one? What do you think the role of the writer should be?
I think that writers individually determine what role they will play in the larger culture. I’m thinking now of George Orwell’s essay, “Why I Write,” in which he identifies four reasons why people write—sheer egoism, aesthetic enthusiasm, historical impulse and political purpose. The essay is from 1946, but these categories still make sense to me. We need aestheticians, historicists, and rabble rousers. I have so much respect for writers who make an effort to question norms and challenge antiquated systems of thought like patriarchy and racism, whether they do so through fiction or creative non-fiction or journalism, but I also appreciate lighter books that I can, say, read on a beach or before bed without crying myself to sleep because of all the hard things they unearth.

What is the best piece of advice you've heard (not necessarily given to you directly)?
A few years ago, while eating Chinese food on Christmas Day in Toronto, I received this fortune in my cookie: trust your intuition. I still carry the message in my wallet.

How easy has it been for you to move between genres (poetry to fiction to non-fiction)? What do you see as the appeal?
I love moving between genres! Seriously, it’s one of my favourite sensations, and it’s something I always try to teach my students, that form is fluid. Sometimes I’ll start writing a story and realize it’s too wordy and would be just fabulous as a narrative poem. I’ve also written poems and felt a story pushing at the boundaries, at which point I take out the line breaks and see where things go. You just have to trust your intuition and let the work be what it wants to be.

What kind of writing routine do you tend to keep, or do you even have one? How does a typical day (for you) begin?
My day definitely does not begin with writing. It never has. My imagination starts to come alive around 8 PM, and my very best writing hours are from 10 PM until 2 AM, which drives the man I live with crazy—he’s a Chinese medicine practitioner and says my organs are trying to regenerate during that time and I am doomed to forever be scatterbrained if I keep staying up so late.  Typically my day begins when I hear this same man boiling the kettle downstairs. My bedroom is a loft with no walls—I hear everything, and it’s a good thing most of the time. It gets me out of bed and reminds me that I’m part of a larger community. It helps me stay human.

When your writing gets stalled, where do you turn or return for (for lack of a better word) inspiration?
Whenever I’m writing, I have four or five books around me that I know I can count on for inspiration. Two of them never change. I always have Bronwen Wallace’s poetry collection Common Magic open as well as Denis Johnson’s short story collection Jesus’Son. More often than not, there will also be a Lisa Moore book. The other books vary depending on what I’m working on. What Denis Johnson and Bronwen Wallace have in common is they both write/wrote fiction as well as poetry. I don’t know how I would get anything done without those books. They sit on my desk, radiating their power.

David W. McFadden once said that books come from books, but are there any other forms that influence your work, whether nature, music, science or visual art?
Travel has been a huge influence—seeing new colours, people, problems, eating new food, standing on new mountains and shorelines. Music is a wonderful influence as well, which will become obvious when reading my book. There are lots of music references in the stories and what I like to think of as the traces of a certain musicality, living inside my words. Film is also an influence, which is why I decided to make a promotional book trailer that is more like a very short film than anything else. You can check it out here: https://www.youtube.com/watch?v=vJlUxCrCaQs

What would you like to do that you haven't yet done?
So many things! Build a cabin. Live on a sailboat. Cycle through France. Hike the Appalachian Trail. Learn to play the sitar. I could go on and on.

What made you write, as opposed to doing something else?
Honestly? I’m happiest when I’m writing, so in the spirit of hedonism, I choose to pursue that which brings me the most pleasure.

What are you currently working on?
At the moment, I am working on a poetry project called Manuelzinho. I started the collection six years ago, almost seven now, while completing my undergraduate degree at Concordia University in Montreal. The first poem I ever published was from that project, and you blogged about it, rob. While in grad school I focused mostly on fiction and I forgot about the Manuelzinho poems completely until Vicki Zeigler posted a link to your blog on Twitter earlier this year as part of her “poem of the day” project.

My reunion with the manuscript has been a happy one. I’m totally in love with the character, Manuelzinho, who is a totally fucked Brazilian man who does things like set his house on fire because he thinks it’s possessed by a cucaracha with moth-like wings. His entire world is strange, and his family too—his father’s out of his mind and wears shirts with buttons made of hound teeth. They are both such train wrecks, even worse behaved than the rowdiest women in Waiting for the Cyclone.