The thing is you never know what has been erased and what has not been erased. (“Étude 5: Up Into Her Hole”)

The first title in editor Julie Joosten’s “Essais” series through BookThug is Toronto writer Margaret Christakos’ remarkable lyric essay/memoir Her Paraphernalia: On Motherlines, Sex/Blood/Loss & Selfies (Toronto ON: BookThug, 2016). Composed in ten numbered “Études”—“Her Itinerary,” “She Comes From Everywhere,” “Retreat,” “Chips & Ties,” “Up Into Her Hole,” “One Body,” “(Iphigenia-as-) Siri, a series,” “Cellphies,” “Her Paraphernalia” and “Cavort”—the opening sections exist as part sketchbook, part travel diary and part lyric essay, moving through the details of a search for the points-of-origin of her grandmothers. She writes: “I also, though, can track a mini-history of enamoured mutual liaisons that veered toward an outcome of eventual unrequired sexual love. It was as if the movement from pleasure to the deprivation of the sexual love object was a turn-on almost more than any other factor. It was a diversion that led me to poetic writing, I see now.” Opening the book with an acknowledgment and exploration of the women from whom she is descended, Christakos pours through what information she can about each of them and how each of them ended up in Northern Ontario into Sudbury, later allowing her parents to eventually meet and marry. She writes:

When I began this project what I loosely knew was that all four of my grandparents had arrived from elsewhere: Nanny from England, Grandad from Upstate New York, my father’s father from Molaos near Sparta, Greece, and my Nana from a small mountain-backed seaport village on the east coast of the Peloponnese. By 1915, they were all residents of the Sudbury region in northern Ontario, separated from their birthplaces, new immigrants, shaping their imaginations of what would become real to them, each cleaved from the phantasmic memories of where they had come from—where I come from. (“Étude 1: Her Itinerary”)

As part of her research into grandmothers, she travels to England to explore London and Bath, sketching notes and taking pictures, writing emails and texts and even taking a lover. She travels to Athens, Greece and, later, to Sudbury, Ontario, all for the sake of exploring the physical spaces of her genealogy.

Walking in Athens my first morning, bewildered and anxious at my adriftness without English, I think of how Mom’s stroke produced a sudden slight of tongue slipping away all recognizable signs and sounds, replacing them with unreadable untranslatable glyphs. Before leaving Britain, I’d asked M while we were still flirting about the parts of his Algerian-Russian childhood he’d experienced in Arabic and Russian. “Who were you, who are you, when you think of your past? Are you the same person in your first language as you are now, in French and English?” He said, “I don’t change who I am, I am continuous,” and then seemed to be willing to volley some of the differentials, before we simmered into what seemed to be inevitable and intense physical speech, lol. But somehow I wondered this about Mom; did she sense how she existed in her past, before the loss, and was it anything like how she existed now? It still seems unassessable. (“Étude 2: She Comes From Everywhere”)

Throughout the course of the ten sections, the book has many centres that she returns to, from her four grandmothers to her own mother to herself and her daughter, moving back and forth between them across a rather wide canvas, allowing myriad interconnections between the generations, and even a rippling between them. The centre, then, becomes the connections between the generations themselves, shifting the narrator/author Christakos as both centre and but one of a line, a lineage, of women.

I am only fifty-two. These emotions seem like they should belong to a woman in her seventies or eighties. But no, now I see, to become fifty as a cisgendered woman can mark a scraping off of sexuality and subjectivity that, no matter how much prepared by a hurrah feminist intentionality for agency, operates like a self-aware social trouncing. Did my mother feel these losses and erasures as she entered her sixth decade, sleeping separately in the house, all of her children entering adulthood, myself at age nineteen involved in a serious live-in relationship in Toronto? I saw my mother as vibrant, full of life and rich in community, eclectic, powerful, a small electric ball of opinion, always changing, actively learning, fearless, driven, unsleeping, free. I did not identify her as lonely, or ailing, or missing sex. I didn’t have such words to attach to the older women of my family, although it seems day-plain to me now that nobody was getting any. (“Étude 1: Her Itinerary”) 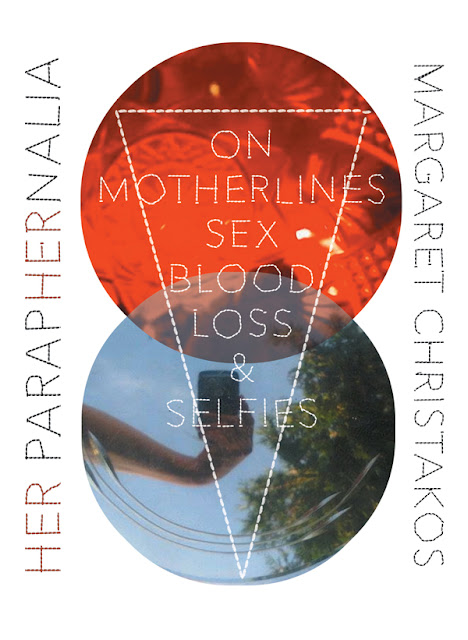 Through family history, selfies and introspection, Christakos writes and rewrites her whole self into being in an utterly fascinating way, composing a layered, lyric and complex portrait/selfie that is deep and considered, raw and determined, through the lines and lineages of precisely what her subtitle tells us: motherliness, sex, blood, loss and selfies. After discussing sex, grandmothers, the death of her mother, children, the loss of children some of her family endured, divorce and what comes next, Christakos includes a definition of “paraphernalia,” furthering what she includes as epigraph to the book, writing that the word “arrived into use in the mid-17th century” and emerged from what property, outside of the dowry, a woman is allowed to keep despite marriage or the death of her husband. As she writes: “Until the Married Women’s Property Acts in the late 19th century a husband became the owner of all his wife’s property when the couple married. A partial exception to this was her purely personal belongings such as clothes and jewellery, which she could keep after her husband’s death. These were her paraphernalia.” So then, Her Paraphernalia: On Motherlines, Sex/Blood/Loss & Selfies is not only composed as a portrait/selfie, but one explored at a very particular point in the author’s life, working to ground, and reaffirm, herself before any possibility of eroding. Hers is a clarity hard-fought and hard-won, and gets to the very core of genealogy and the self, and how we are affected by those who came before us, through what we choose and what we can’t help but become.

Reality is a set of agreements about what exists. I am a seer, more than anyone or myself will allow. I have a voice in me that is full-spirit, wearing the skin of an ordinary woman, but bigger forces abound. There is a misfittedness in me; daily modern life holds me in its reins. I feel an otherness, a kind of pantomime of unfurling. The world of death is as real as the world of the living; grind it and shred it all you like, larger energies rise up and shimmer, shadow us; it is not a time for ordinary speech. This is where poetry exists. Poetry is not the scrawl of shitheads hoping for stardom. Poetry is the otherness beyond ordinary speech, the after-image of the dead inside my organism, the after-image, that is, of my mother’s death to come. And the death of my grandmothers, and their mothers. And so on. (“Étude 9: Her Paraphernalia”)