Her body washes in, a tangle of seaweed and her grandmother’s fake sapphires. He is disappointed about the way her body is shaped. “I thought she was a whale.” We watch her arching her back, her eyes sand-coated magnifying glasses. Ambulances never occur to us, we say later, when the light is a funeral home disco in our un-made-up faces. We just wanted to see some mating whales, we say. 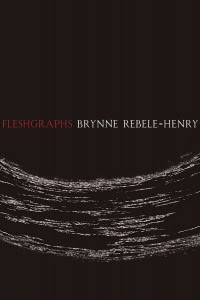 American poet Brynne Rebele-Henry’s remarkable first full-length poetry book is Fleshgraphs (Callicoon NY: Nightboat Books, 2016), a “visceral engagement with the politics and poetics of girlhood by a 14-year-old author.” Composed in two hundred and sixty-six short, seemingly self-contained numbered sections over a few weeks when the author was still only fourteen years old, Rebele-Henry’s Fleshgraphs exist in collusion, collision and collage, pushing a conversation of girlhood, sex, the body, intimacy and violence through an occasionally dark and even grotesque humour. “I ask my wife if I can take a shit inside her.” she writes in section #106. Further along, section #121 reads: “Her thighs taste like Lysol.”

From section to section, the perspective, and even the narrator, shifts, presenting a sequence of near-aphorisms that thrash and rail against the reader and each other. As she describes the collection in a recent interview: “[…] the book is a literal graph of flesh. The book is composed of confessions (inspired by both religious confessionals and online confessions), and is about benign or intense or horrible things happening to bodies, and each experience is told through a different numbered fragment. The book is also composed of fragmented short paragraphs, or graphs. […] I was trying to write a feminist dissection of rape culture and online confessions, but also a celebration of the body’s resilience.”

I sidle up to the cashier and undo the tie of my trench coat and my breasts come out and I rub them against the conveyor belt and lick my true love’s face.

Part of what makes Brynne Rebele-Henry’s Fleshgraphs so compelling is in its daring, honesty and straightforwardness, speaking pointedly to “a range of sexualities,” perspectives and even personalities. Her prose is fearless, rich and evocative, thick with detail and presence and confidence, making this one of the most frighteningly-talented debuts I’ve seen in a very long time.

I alphabetize the girls by tens and letters. First: Annie and her cellulite thighs that made her say of herself: walrus. I would bite them with my too sharp incisors. Second: Betty and the weird sounds she made that were more like birth than sex and her pinup rolled back hair. Third: Carrie, and her light moustache. Fourth: Diana and her autumn mouth and how she always burned cookies. I stop at six because that’s too fucking sad but I think of her knuckles and the sound they made against my forehead still.