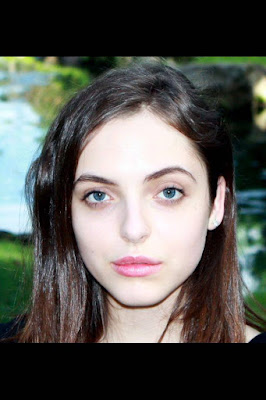 Brynne Rebele-Henry’s poetry, fiction, and nonfiction have appeared in such journals as Denver Quarterly, Prairie Schooner, Fiction International, Rookie, The Volta, and So to Speak, among other places. She is a founding editor of Fissure, a magazine dedicated to young LGBT+ writers and artists. Her book Fleshgraphs appeared from Nightboat Books in September 2016. She was born in 1999 and currently lives in Richmond, Virginia.

1 - How did your first book change your life? How does your most recent work compare to your previous? How does it feel different?
Publishing Fleshgraphs changed everything! It was the most amazing feeling to find out that I could write books that people would want to read and publish or invest themselves in. I’m so grateful for that.

My newer work is harsher, more bare-boned, but also sadder and more tender, I think.

I’ve been writing a lot about violence against queer bodies and women’s bodies, something that, after Orlando, is a crucial topic in our current culture. I’m working on a novel about a hate crime and the subsequent murder trial, and it’s so hard to write. I keep crying in public places while working on it.

2 - How did you come to poetry first, as opposed to, say, fiction or non-fiction?
I write in every genre, but for me writing poems has always felt more joyful than other genres. I have more fun with them. I feel like poems are innately freer than any other genre because there aren’t any limits with what you can do with poems, they’re divorced from the conventions, stylistic or otherwise, that follow fiction and nonfiction. I have different priorities with each genre: with nonfiction, I mainly write personal lyric essays or political essays about queer/women’s issues and body issues. With fiction, I try to open a dialogue about queer girls, queer bodies, sexualities, without that being the whole crux of the work, and try to portray and talk about the many facets of girlhood. I think of my poems more as a manifesto consisting of snapshots. I write them like I’m taking Polaroids: fast and pointed and political, a rush of words. I want my poems to feel like an incantation, almost.

3 - How long does it take to start any particular writing project? Does your writing initially come quickly, or is it a slow process? Do first drafts appear looking close to their final shape, or does your work come out of copious notes?
I write really quickly. I wrote my most recent manuscript in two days, but usually it takes about a month or two months for me to complete the first draft of a manuscript. I wrote Fleshgraphs in a few weeks. The revision process changes from book to book, sometimes I only have to do basic edits, but other times it requires months of revision and rewrites. My first novel, The Glass House, took five months to write, but I revised it several times over the following two years, then completely rewrote it last summer.

4 - Where does a poem or work of fiction usually begin for you? Are you an author of short pieces that end up combining into a larger project, or are you working on a "book" from the very beginning?
It changes. Sometimes I just happen to amass the pieces of a manuscript, but usually with fiction and nonfiction it’s very deliberate. I sketch out the book and what the work addresses, do some research, and then start weaving it all together, turning it into a book, trying to combine all the threads. With poems it’s more of a natural accumulation. I curate my poems as a write, so I’m always thinking of how one poem fits into my other poems and so on. I put them together like it’s a gallery show, almost.

5 - Are public readings part of or counter to your creative process? Are you the sort of writer who enjoys doing readings?
I do! I get stage fright, though, so I’m usually simultaneously terrified and elated. I’ve memorized about half of my poems and some of my stories, and I think having the work memorized and being able to recite it helps with stage fright. I write auditorily, often I’ll say the lines out loud as I work with them, so giving a reading helps me gauge where I could change the cadence of the work or a certain word. Often, I improvise and change the poem mid-reading because I think it sounds better than the way I initially wrote it.

6 - Do you have any theoretical concerns behind your writing? What kinds of questions are you trying to answer with your work? What do you even think the current questions are?
In my work I try to make queerness mainstream, try to change the way that queerness is usually something obscure, tokenized or delegitimized in literature, TV, and the media. I want to write about women and femmeness in a way that isn’t a discussion as to whether their voices matter, or a discussion about including their voices, but by writing only in their voices.

All of my characters are gay. I have no interest in portraying or discussing heterosexuality or heterosexual desire in my novels and short stories. I want to make gay women and men the majority in my work, not the exception, or the token, or the plot twist.

7 – What do you see the current role of the writer being in larger culture? Does s/he even have one? What do you think the role of the writer should be?
I think writers are vital in effecting change in the culture. I don’t think there’s any specific role a writer should fill, other than to write, of course. Writing itself is a political act. However, I do think it’s important not to remain silent about political issues.

8 - Do you find the process of working with an outside editor difficult or essential (or both)?
I find it essential—I think there’s a lot that an outside editor can pick up from a manuscript that needs to be fixed, or clarified or improved.

9 - What is the best piece of advice you've heard (not necessarily given to you directly)?
“Write a lot and write well.”

10 - How easy has it been for you to move between genres (poetry to fiction to non-fiction)? What do you see as the appeal?
It’s fairly easy for me, I think about different genres in different ways, and my process for each is so different that I rarely get the work muddled.  I feel like I can accomplish more politically and aesthetically with different genres than I can with one single genre. I can cover more topics that way. I like being able to write a political essay, and then write a poem about a tarot card, then a story about Texas and teenage girls and drowning.

11 - What kind of writing routine do you tend to keep, or do you even have one? How does a typical day (for you) begin?
I usually wake up fairly early, get coffee and check my email. Then I make breakfast and more coffee and bring those to my desk and write. Other than that, I don’t really have a set routine, unless I’m on a tight deadline, and then I adhere to a really strict routine: writing from the time I get up until about midnight, taking breaks in the afternoons only to get coffee or tea and walk my dog and then returning to my writing desk.

12 - When your writing gets stalled, where do you turn or return for (for lack of a better word) inspiration?
I like to make lists of everything: plant species I find beautiful, extinct animals, saints from the Middle Ages, blue paintings, the names of all the tubes of red lipstick that I own. I have hundreds either transcribed into notebooks, on my laptop, or tucked into books.  When I run out of topics I forage for the lists until I find something that feels noteworthy or like I want to research it. Then, I start again. My work is very research based, I really like to incorporate rare facts, or strange things I’ve found into my stories and poems. I’ve also found that I write in lists (both literally and not, since the main character  in my first novel, like me, makes lists constantly), so often my stories start with a list of scenes that expands into something else.

13 - What fragrance reminds you of home?
Magnolias! When I lived in Athens as a little kid there were these huge moon-yellow magnolia trees. Now, I make perfume out of flowers from the different places I’ve lived or places that have significance to me (magnolias, wild roses, jasmine, honeysuckle, etc). I used to write codes with flowers into my work—in the 1800’s queer women had codes that they’d use for the flowers they sent each other. For example, purple flowers equated to queer romantic interest, chrysanthemums were bad luck, lily of the valleys were regret, pale lilies were for mourning, pansies were loss of innocence, and so on.

14 - David W. McFadden once said that books come from books, but are there any other forms that influence your work, whether nature, music, science or visual art?
Women’s history and queer history definitely influence my writing—atrocities, historical events, secret but influential figures, discrimination. Also, old anatomy or psychology textbooks and studies, botany, and bone readings—a fortune telling technique where you cast bones and then divine from them. Old Tarot decks. I started out as a painter and then a sculptor, before I became a writer, and because of that I often write about lost art, artists, sculptures or ancient carvings, furniture, the process of making or destroying art.

15 - What other writers or writings are important for your work, or simply your life outside of your work?
I love Dara Wier and Peter LaBerge because they’re both amazing writers and I adore them. Julia Elliott and Lily Hoang because their work never ceases to astound me, and Roxane Gay, Katherine Dunn, Maggie Nelson, Zadie Smith, and George Saunders.

16 - What would you like to do that you haven't yet done?
I’ve always wanted to write and illustrate a graphic novel! Or to take an old text (such as Carmilla, the gay vampire novel from the 1800s) and make it a graphic novel.

17 - If you could pick any other occupation to attempt, what would it be? Or, alternately, what do you think you would have ended up doing had you not been a writer?
I would have gone back to being a painter and sculptor. I painted flesh, primarily, but in an abstract sense: I’d study bodies, old cadaver pictures or surgical photos, photos of bodies before and after procedures such as liposucture or skin grafts and then paint the flesh from a sort of collage perspective: I wanted to portray queer bodies and bodies with scars as beautiful, to paint them in the same way the Venus de Milo or renaissance girls would be portrayed. It was a deeply personal project, because I got the idea from painting my own scars, which were from surgeries I had as a child, from an artist I worked with who wanted me to paint self portraits. This latter inspired a book-length lyric essay which I recently finished.

18 - What made you write, as opposed to doing something else?
Because I loved writing more than anything else.

20 - What are you currently working on?
I’m working on my first YA novel, which is about conversion camps and is a queer rewriting of the Orpheus myth, a collection of personal essays, the novel I mentioned earlier about a hate crime and its aftermath, and a different novel about Catherine of Siena.