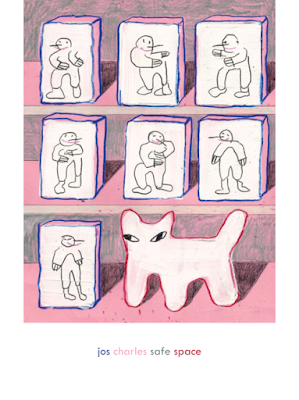 Los Angeles “trans poet, writer and agitator,” as well as “founding editor of THEM—the first trans literary journal in the U.S.,” jos charles’ first book-length poetry collection is safe space (Boise ID: Ahsahta Press, 2016). safe space is a collection of lyrics writing out survival, solitude, “trigger warnings” and the failures of America and being American, amid a series of intimate acts and interactions. As they write in the poem “SEAGULL, TINY”: “There / is hope // of forgiveness, but / my american // corpse has been such / a disappointment // I would live on / feeling safe // and  spilling secrets [.]” Later, to open “POEM FOR SHIA,” they write: “I was always / impressed by / that / motherfucker / dante’s hell // I mean, the / sonofabitch / names names [.]” There is an attentive, fiery and savage wit that flourishes in these poems, one that names their own names and takes no prisoners. This is a pretty fucking smart debut, and one I would certainly recommend.

A POEM SHOULD SHOW NOT TELL

I wanted fixture of eyes
one nutritional fact and the sturgeon

Uncle in the bathroom, eyes
in the window in every time dream

I wanted tastelessness without color
theory   An empty room

is the internet and elements
are impervious to converstion

Remember the man the woman
and the woman’s body discretely

I want so much for our men