It’s remarkably rare for the editorial of a journal to respond in such a way as Fence has to one of its own editors, as Charles Valle writes in his articulate and deeply sensitive editorial [see the full text here]:

Earlier this year, the Fence editorial staff had several lengthy and intense discussions sparked by [editor] Rebecca [Wolff]’s insensitive Facebook comments on the Purdey Lord Kreiden/Michael Taren video and a poem with a racial slur in the title she wrote and read in public. The longest thread ran 56 emails deep. We were hurt and angry and disappointed in various degrees. As a person of color, as a friend, it felt shitty. As a colleague, it felt deflating knowing people would associate and attribute the words and actions of the public face (Rebecca) with the other 15 editors.

Long one of my favourite American journals, I’m pleased to see Fence discussing the actions and words of a single editor, responding to such as an organization, and attempting to move forward. The editorial ends with:

Earlier in the year when we were reeling from Rebecca’s insensitivities and gross articulations of white privilege, we discussed several actions and proposals. Some of the actions were prescriptive and could be easily and quickly implemented. Others were more radical in scope.
The consensus is that we do not want any tokenizing gestures. We want action and we want our actions to be intentional and transparent. We want to publish majority POC, majority Queer.
We recognize a structural problem. We are in the process of a rethinking, a paradigm shift, a self-administered kick in the ass. In the next couple of years, Fence will continue to evolve and iterate. We will take risks. We will make mistakes. We will learn. We will refine. We are committed to making Fence a place that writers of color care about. We need you, dear reader, to hold us accountable.

Obviously, a discussion of the new issue can’t help but include a mention of such an editorial (I was completely unaware of any of this until reading such); while I’m not wishing to pour salt on any wounds or make matters worse, nor wishing to distract away from the actual content of the issue itself, but such a public admission by such a long-standing journal is not only brave, but required. I applaud them for such, and hope they can find their way forward. 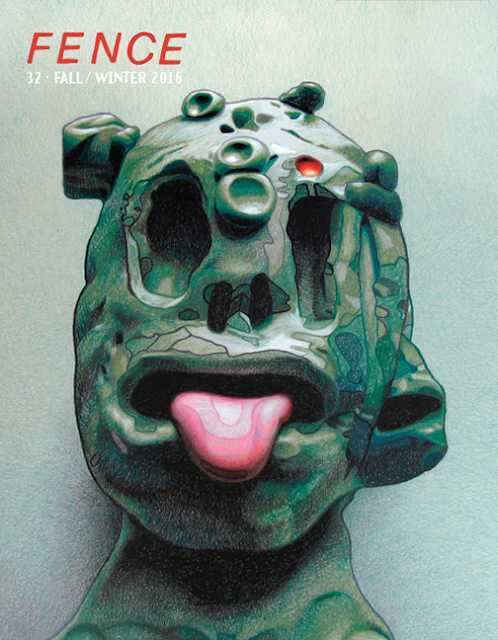 On the television
A woman carves from a stack of rice krispie squares
Human breasts.

I feed cut watermelon to my grandmother.

I am low and found; I am high and found.
When I read that part to my mom over the phone she
Cries. It’s sad
She says.

I put my ticket there on her Visa.

The next day my cousin sends me a message.
I read the message.
Then what I do is call my mother.
Now you don’t have any more grandparents!
She’s crying – and good now
I am
Too. (Aisha Sasha John, “In August I visited my Gran.”)

Entirely separately to that, the issue itself holds some damned fine work, and the opening pieces by Toronto poet Aisha Sasha John, “from I have to live,” is just stunning, as are works by Emily Abendroth, Amanda Nadelberg, Henry Israeli, Elizabeth Robinson (a personal favourite) and Debora Kuan. The prose pieces by Khadijah Queen, also, apparently composed as breathless reminiscences, are incredibly striking; I would like to see more of these, please:

I was nine or ten when I met Minister Louis Farrakhan at Mosque No. 27 on Crenshaw

I was nine or ten when I met Minister Louis Farrakhan at Mosque No. 27 on Crenshaw everyone kept saying how he wouldn’t be giving that many appearances anymore because he had cancer & I stood in line with my mother & sister to meet him we had on our white MGT-GCC uniforms my mother was a captain so she had on a fez & my sister & I had pristine head scarves the same thick material as our dresses & starched to perfection the line was really long but we were close to the front so my white patent leather shoes hadn’t yet started to pinch when I climbed the steps of the dais & he held both his hands out for my hands & smiled & his skin was so clear I remember how shiny it was not in a greasy way but a bright kind & he called me little sister & asked my name & said it was the same as his wife’s & he expected me to live up to its greatness

Consider for a moment, if you will, the remarkable fact that American poet Cole Swensen is working on a sequence of poems under the title “LISA ROBERTSON: SEVEN WALKS,” clearly referencing Robertson’s Occasional Work and Seven Walks from the Office for Soft Architecture. I am very excited to see where and how these poems end up:

The petal was another one; it undid, and then one again, one pale room
over the market turning pink. It is early in the rhythm of the theater of

the soon. We walked the vowel into an archive through windows rent
apparent by bombing, entirely morning – light can seem to strike light in

a spear that breaks, but we are used to the broken, and so built a library. (“The First Walk”)

There is also a numerical work by Kyle Booten, “Laminations (after Ed Ruscha),” reminiscent slightly of the numerical works by the late Canadian poet Wilfred Watson (a kind of writing I haven’t seen anyone replicate or be influenced by, to my knowledge; I fully suspect Booten has never heard of Watson); while the numerical systems (each stanza repeating the cycle of three) might not be connected to the works of the American artist Edward Ruscha, the text itself does seem to be influenced by him, as the poem opens:

The issue also hosts a healthy folio of “Other Worlds,” a section of, as folio editors Andrea Lawlor and Trey Sagar call it, “new writing that called itself speculative, or fantasy, or science fiction, knowing that innovative writers have been working inside of and into these genres for years.” The folio includes works by M. Milks, Nathaniel Mackey, Elizabeth Breazeale, Kathryn Davis (as well as an interview with her conducted by Rav Grewal-Kök), Michael Holt, Brenda Iijima and Metta Sáma.