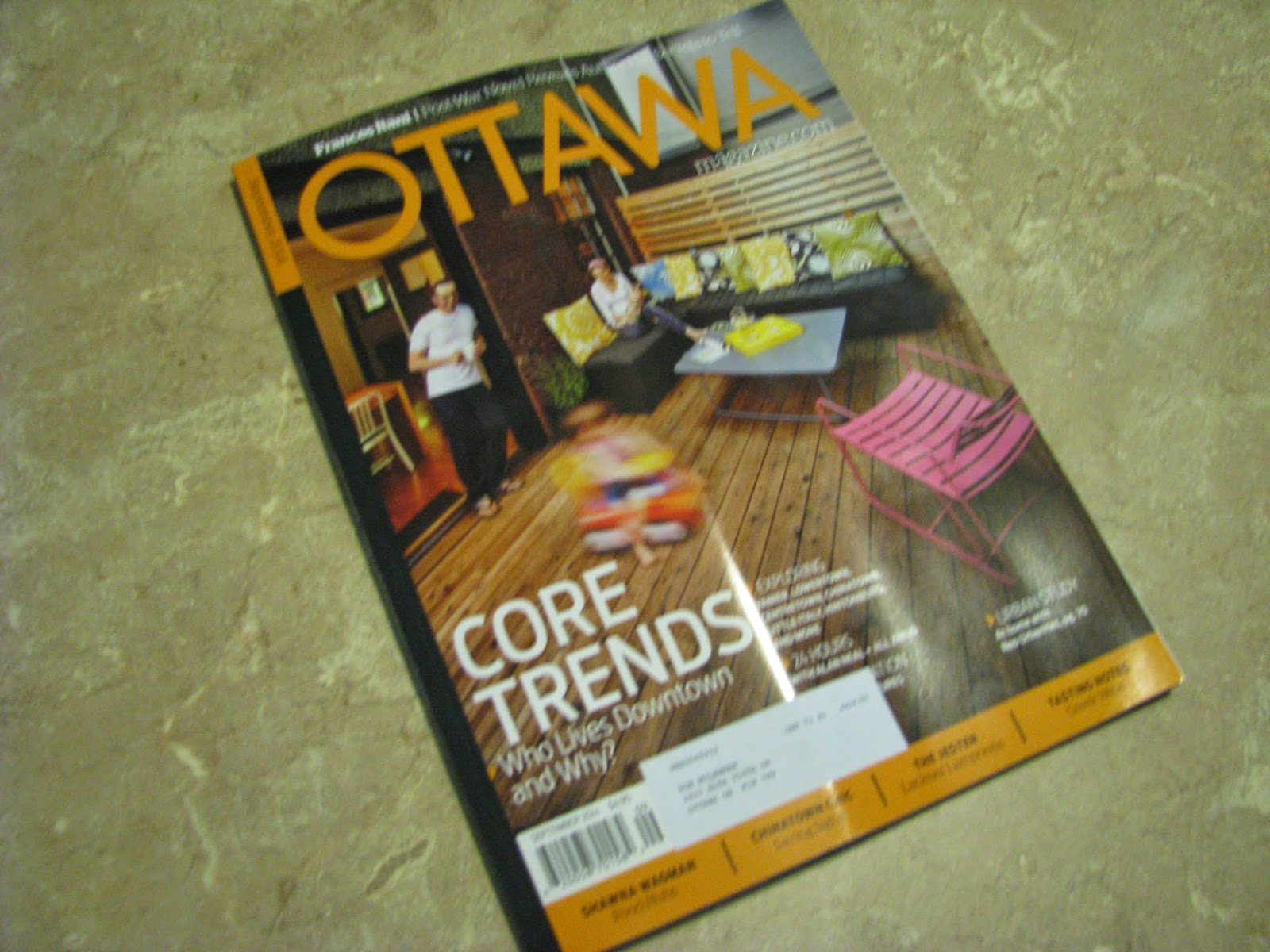 I had a back-page piece in the September issue of Ottawa Magazine, solicited by Dayanti Karunaratne, that I am extremely happy with, on Centretown, history and neighbourhoods. In case you didn’t happen to see such on newsstands, I reprint (with permission) here:

I’ve lived in Ottawa long enough to appreciate the layers that exist in the city, and long enough to become bored with the repeated self-designation of sleepy government town. One has to know where to look. Perhaps during such a period of urban development is the best time to re-think a self-portrait. The unexamined space, one might paraphrase, ain’t worth living in.

The bulk of my twenty-five years — in some half-dozen houses — have been in Centretown, and I’ve long been aware of the former lots granted to Colonel John By and William Stewart, which were part of the central core of what was once a Victorian town of lumber and rail. Before that, this was the site of some hundreds of years of native settlement, exploration, and travel. Montreal Road, for example, is quite literally the road to Montreal, and lies on the trails First Nations peoples established as they travelled back and forth between what wasn’t yet Ottawa to what wasn’t yet Montreal.

To live in any space or landscape, one should at least make some attempt to understanding it, both as a current entity and a historical one. There were the riots that regularly began between Irish Shiners and French in Bytown throughout the early part of the 19th Century, culminating in the infamous Stoney Monday Riot of 1849. For their own safety, the police wouldn’t interfere with most of these fights until they began to threaten the more expensive neighbourhoods further east beyond Lowertown. Imagine: in 1845, we were the most dangerous city in the Commonwealth. From these events, we remember Joseph Monferrand, who later became known as Big Joe Mufferaw, the legendary hulk of a man waist-deep in a number of those battles.

The bulk of Centretown is the former Lot F, picked up by Colonel By in 1834, with the southern stretch picked up by William Stewart, where he and his wife eventually created Stewarton, with streets his wife Catherine named for their children: Ann (later renamed Gladstone), Catherine, McLeod, and Isabella. To understand a space is to understand what it has come through. There is the used bookstore at Bank and Frank streets that housed a punk club beneath, back in the 1970s. There is the former theatre still known as Barrymore’s that every so often someone inquires about, wondering why someone doesn’t clean up the outside. Confederation poet Archibald Lampman once lived on Florence Street with his mother. Elvis performed at the Auditorium on Argyle Street, the same stadium that once housed the Ottawa Senators — it was later demolished and replaced with the YM-YWCA.

There are more recent events as well. The collapse of the wasted space that occupies Bank and Somerset streets, at the husk of the Duke of Somerset building, for example. Imagine: someone with money could refurbish such as an Ottawa version of Toronto’s Gladstone Hotel, providing much-needed hotel space downtown, a martini bar and a cool arts space.

At the corner of Bank and Argyle streets, there was the crossbow murder of crown attorney Patricia Allen by her husband in 1991. There are events we remember because we need to remember them.

The shifts are constant, continuous, and to be expected. Condos arise like mushrooms, including around McLeod and Bank, within the former village of Stewarton. Recently, we discovered that the house we lived in, just west of the intersection, was once owned by a friend’s great-grandparents. He sent wedding portraits from the 1920s of his grandparents as they stood in our driveway. Ottawa poet, songwriter, and cabdriver William Hawkins claimed to know the house in the 1970s as a very sketchy rooming house, as he delivered various unsavory types to a front door we would grace for two years. The house itself, with our enviable third-storey turret, was one of the first on our block, constructed in 1895. That stretch of McLeod sits on such a ripple of bedrock that basements become, from house to house, of a completely random depth.

Some might resist the construction of condos in the city’s core, but it far beats the alternative. Most of the 1990s seemed to include every second or third business closing, and it felt as though the plan was to actually exclude downtown residents. I feared for Ottawa turning its downtown into a dead core, much like what Calgary had been for a long time. The revitalization, done properly, can provide new energy to a city that requires both renewal and the knowledge of what had come before.

And, as Saskatchewan poet and Chinatown resident John Newlove once wrote, the past is a foreign country. And yet, so much is familiar. He lived on Rochester Street for 17 years, the longest he lived anywhere. Arriving from British Columbia in 1986, he once claimed to live in Ottawa, “for his sins.”

This knowledge provides a richness to the landscape. Part of why we resisted the condo-company attempting “South Central” was precisely for the sake of our own history. We don’t need a new name. We already have one.

Ottawa-born rob mclennan is the author of, among others, The Uncertainty Principle: stories, the non-fiction Ottawa: The Unknown City, and the poetry collection If suppose we are a fragment. He blogs at robmclennan.blogspot.com