I WAS RAISED INDOORS BY PARENTS ATTEMPTING TO SPARE ME from developing allergies or asthma. Mother indulged my bookish inclinations, borrowing a shelf’s worth of hymnals in noble German alongside sheaves of humble English novels. Father assigned me a related duty: I was to translate sheets of Hüag’dietsch and Enjelsch lines into Plaut’dietsch, our mother tongue, a plain-spoken parlance with the cadence, intonation, and tempo of the Canadian prairies. Such a learned chore was common in Mennonite – ooda Mennoniet – households like mine, for we were formally illiterate, in spite of our fluency with a particular Germanic vernacular, yet in the first half of the twentieth century a daughter normally assumed that responsibility. (“A NOTE ON THE TEXT”) 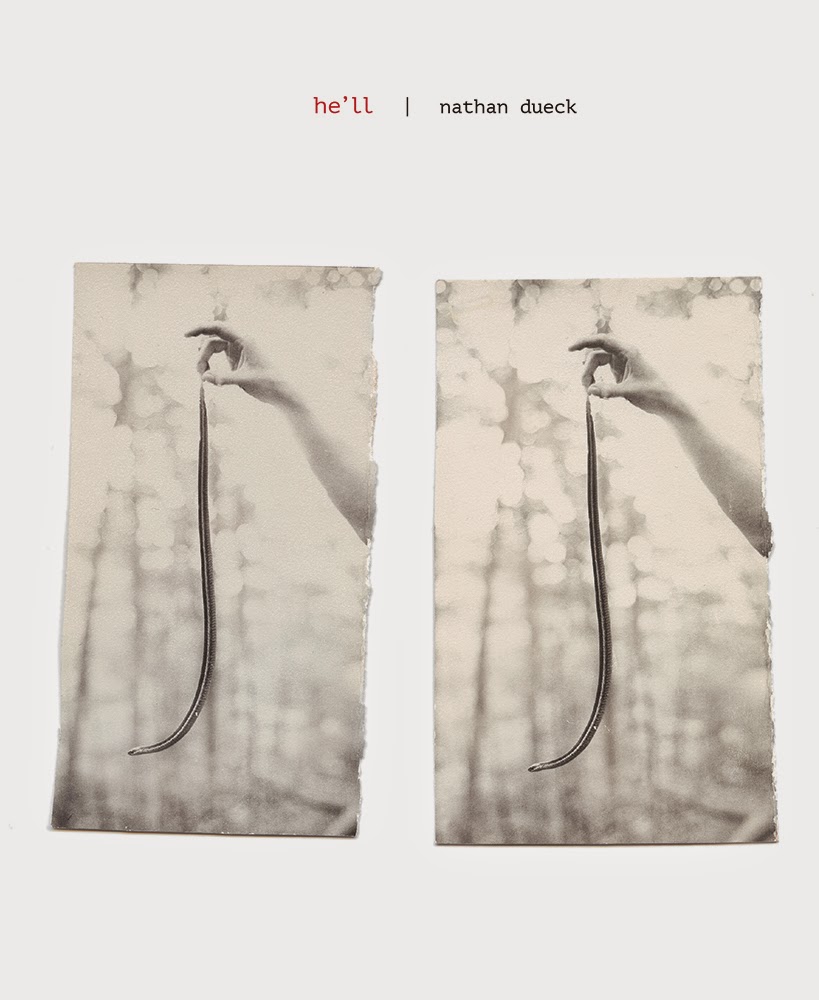 And so begins Calgary poet nathan dueck’s second trade poetry collection, he’ll (St. John’s NL: Pedlar Press, 2014), a wonderfully playful book of anxieties surrounding translation, culture, punctuation (such as this poem, included recently as part of the dusie “Tuesday poem” series) and language. Constructed in the collage structure of the Canadian long poem, he’ll explores the anxieties, histories and contradictions of his Mennonite self. As he writes: “By the time you read my admission it will / be posthumous. So long I have suffered sin- [.]” In many ways, dueck’s he’ll seems influenced in form by Dennis Cooley’s Bloody Jack (Turnstone Press, 1984), among others, for his playful use of language (including the pun), wild collage of lyric and characters, and array of disparate sections. In many ways, dueck is applying many of Cooley’s poetic and storytelling structures and exploratory techniques to his Mennonite past, much in the way (via far different forms) Myrna Kostash and Andrew Suknaski did in the 1970s and 80s for first generation Ukrainian Canadians. At some points in the book, dueck utilizes the visual/concrete, sometimes the staggered lyric fragment, and other times, the book reads as straight documentary. “I cannot create / a tradition.” he writes, in the poem “EULOGIUM”: “I can only invent a new testament.” There is a lot happening in he’ll, and dueck’s is a rich, wide and varied canvas. As part of the poem “PROEM” reads:

He will quietly homily, you know. Eli will.
Peck
keys of a manual typewriter
over an ad from page
656 of the 1979 Sears catalogue. Or a recipe on
page 13 of the Mennonite Treasury. Full stop –

Appearing a full decade after the publication of his king’s(mère) (Winnipeg MB: Turnstone Press, 2004), which explored aspects of Prime Minister William Lyon Mackenzie King’s life, beliefs and death, dueck appears to favour the book-length exploration subjects through the essay-collage of experimental and avant-garde lyric, and manages to create something entirely thrilling and unique, pushing in directions rarely taken in poetry. How many other poetry collections might include a clearing or two of the throat?

Lost my place staring at headstone posture of a church minus its steeple. Rows made from felled birchbark with plastic kneelers of summerfallow fertilized by formaldehyde. When Rat River runs off, pews embalm churchgoers in Sunday clothes.